Hearing a sound can alter perception of finger size

Hearing an ascending sound while pulling their own finger can make a person think their finger is longer than it is, finds a new study led by UCL and the Institute of Philosophy, School of Advanced Study, University of London. 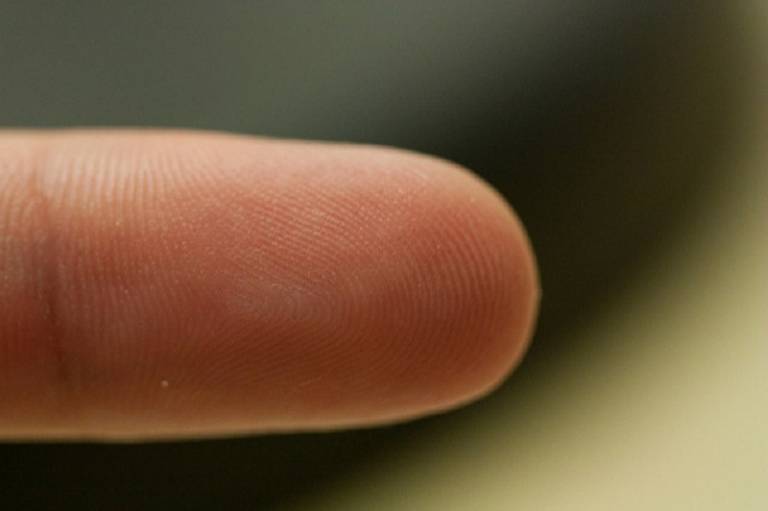 The study, published in Scientific Reports and funded by the Economic and Social Research Council (ESRC) and the Arts and Humanities Research Council (AHRC), provides the first evidence that an artificial sound, unrelated to the sound of body movements, can alter how a person perceives their own body when the sound is arbitrarily paired with a bodily action.

"Just like how cartoons will play a rising-pitch sound effect to illustrate something being stretched, we found that playing a rising pitch while people pull on their finger can give people the impression that their finger is longer," said the study's lead author, Dr Ana Tajadura-Jiménez (UCL Interaction Centre and Universidad Loyola Andalucía).

In a series of three studies, female participants were asked to pull on their index finger while a simple sound was played, with ascending, descending, or constant pitch. Their hand was hidden from view by a black cloak. They were then asked to estimate the position of their fingertip and of their knuckle by using a pair of sliders. The distance between the two sliders represented how long they judged their finger to be, without being able to see it.

When participants heard an ascending sound, they estimated their fingers to be longer than when they heard a descending or constant sound, a finding that remained constant whether they were asked to pull upwards or downwards, with their index finger pointing, respectively, upwards or downwards. They were also asked to select from a series of drawings of hands with pointing fingers of different lengths, choosing the one which corresponded to how their finger felt; accordingly, they chose images with longer fingers when they heard the ascending sound. A follow-up study found that the sound did not affect how strongly they pulled.

"In the studies conducted as part of our project The Hearing Body, we previously found evidence that manipulating the sounds produced when we touch or hit something can alter how we perceive our own bodies, but here we used non-naturalistic sounds that are not typically associated with bodily movements," said Dr Tajadura-Jiménez.

Co-author Dr Ophelia Deroy (Ludwig Maximilian University, Munich and Institute of Philosophy, School of Advanced Study, University of London), said: "Previous research has found that our representations of our own bodies are flexible and can be modified by visual or tactile cues, but these are most often realistic - finding the effect with an arbitrary association with sounds shows how ready we are to refer available information to ourselves."

Co-author Professor Nadia Berthouze (UCL Interaction Centre), said: "We hope that our findings could help guide rehabilitation strategies for people with poor proprioception - that is, sensing the relative position of their body parts. Auditory approaches may also help with treatments for people with chronic pain who are reluctant to look at the affected body part. Current strategies focus on visual and tactile input, but we find that auditory-driven strategies should be investigated."

The researchers were from UCL, the Institute of Philosophy and the University of Warwick.