How the natural defence force within our immune system attacks and destroys harmful invaders such as virus-infected and cancerous cells has been visualised in microscopic detail by scientists from UCL, Birkbeck, University of London, Peter MacCallum Cancer Centre and Monash University, Australia. 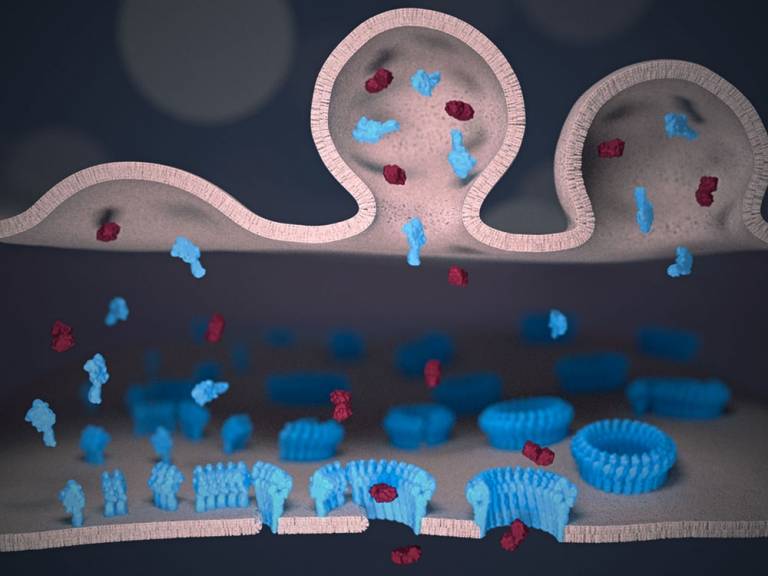 The research, published today in Nature Nanotechnology, deepens understanding of the critical role of the protein called 'perforin' in a functioning immune system, bringing us one step closer to new therapies with the potential to boost or inhibit its impact when required.

Using a form of microscopic CCTV, it was shown how perforin binds to the protective membrane that surrounds harmful cells. Professor Hoogenboom said: "Our immune system needs to drill holes in virus-infected and cancerous cells to get rid of them, but can't buy such drills in a DIY shop. We have now shown how it self-assembles these drills on the spot by putting multiple perforin molecules together in ring-like structures, leaving tiny holes - just tens of nanometres in diameter."

Associate Professor Ilia Voskoboinik, a lead co-author (Peter MacCallum Cancer Centre), said: "To kill virus-infected or cancerous cells, perforin must be quick and efficient. Our experiments in Melbourne show that patients who are born with impaired perforin may present with fatal failure of the immune system and also have a higher risk of developing blood cancers.

"This was entirely consistent with the microscopic data obtained in London, which shows that the effectiveness of perforin is greatly hampered even if only a small number of the perforin molecules are abnormal. This new understanding brings us one step closer to targeted therapies that can strengthen the body's perforin-producing power to ward off disease. We could also inhibit its function to prevent the rejection of organ transplants, when accepting foreign tissue or cells can be instead life-saving."

To film perforin in action, the scientists used atomic force microscopy in Professor Hoogenboom's lab at the London Centre for Nanotechnology at UCL. This type of microscopy uses an ultrafine needle to feel rather than see perforin on a target membrane, similar to a blind person reading Braille. The needle repeatedly scans the surface to produce an image that refreshes fast enough to track how perforin molecules get together and cut holes in the membrane.

Initially, perforin appeared as a blur on these images. However, once a few perforin molecules together inserted into the membrane, they could be more clearly identified and shown to recruit more perforin to thus growing transmembrane pores.

By also recording static snapshots at higher resolution by using electron microscopy, Professor Saibil's team succeeded in estimating, for each perforin assembly, the number of molecules at each stage of the process. This confirmed a change from loosely packed small perforin assemblies on the membrane to larger and more tightly bound transmembrane pores.