UCL, the only UK university with a Modern Foreign Language (MFL) requirement for all UK undergraduates, has set a precedent by recognising British Sign Language (BSL) as a 'foreign' language option - a move it hopes will increase awareness of and access to BSL. 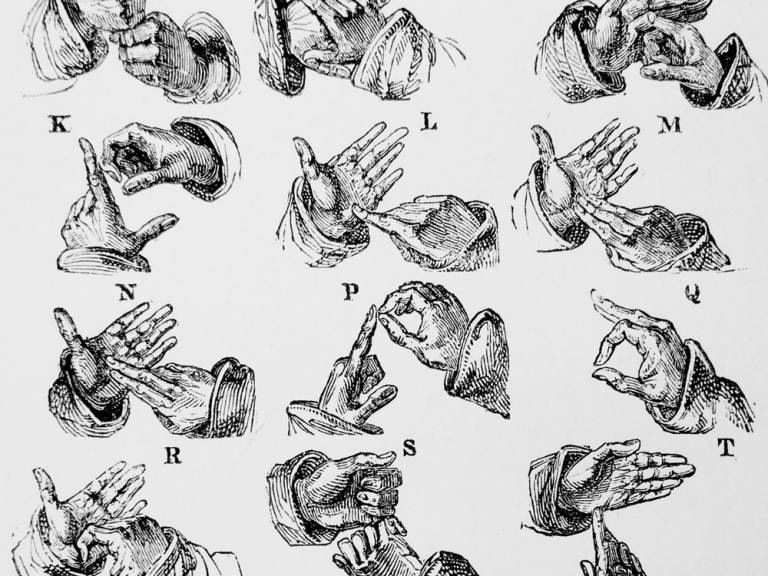 The call for BSL to be recognised as a MFL was championed by the Deafness, Cognition and Language (DCAL) Research Centre, based at UCL. DCAL is the largest research centre in its field, bringing together leading Deaf and hearing researchers in the fields of sign linguistics, psychology, and neuroscience.

Although BSL is not a 'foreign' language, it is an indigenous minority language and its users share a strong cultural history and identity, which is centred on the language, not the deafness itself. It is hoped that by bringing BSL into the universities' foreign language requirement, it will lead to greater uptake of BSL and promote greater accessibility for Deaf people and understanding of Deaf communities internationally.

In the United States, American Sign Language has been widely accepted as a MFL, and it is now the third most commonly taught language in US universities, while in the UK there has been a marked swell in support for BSL to be recognised as a MFL in recent years, including for BSL to be classed as a foreign language at GCSE to improve social understanding and break down barriers for Deaf and hearing impaired young people.

It is thought that the recognition of BSL as a MFL will also benefit UCL students from particular specialisms, who may come into contact with deaf signers in their future careers, such as doctors, speech and language therapists or teachers.

"I'm delighted that UCL has recognised BSL as a language that meets its Modern Foreign Language requirement.   Students will be able to use pre-existing sign language qualifications to meet the MFL requirement. In addition a whole new cohort of students will be exposed to the BSL teaching on offer at UCL and this will bring with it greater awareness of the world-class research conducted at the UCL Deafness, Cognition and Language research centre" said Dr Mairead MacSweeney, Centre Director at DCAL (UCL Psychology and Language Sciences).

"It is exciting news that BSL - the language of the British Deaf community - has been recognised as one of the modern foreign languages offered at UCL. UCL is uniquely placed to deliver BSL teaching because it is the home of the Deafness Cognition and Language Research Centre (DCAL), where world class research into sign language and cognition has been undertaken since 2006," said Dr Robert Adam, Director of Continuing Professional Development at DCAL (UCL Psychology and Language Sciences).

"The Faculty of Brain Sciences reflects the values of the wider UCL community in aiming to foster a positive environment to work and study; championing an inclusive, diverse, enabling culture of equal opportunity where all staff and students can flourish. We are therefore delighted with this important recognition and hope that this will further raise awareness of British Sign Language (BSL)," said Professor Alan Thompson (Dean, UCL Faculty of Brain Sciences).

"Learning another language is a key to another culture, and the BDA is really pleased to see that UCL has taken the initiative to recognise BSL as part of its Modern Foreign Language requirement.  Teaching BSL is essential for a more inclusive environment for deaf learners, and helps to improve communication and understanding between deaf and hearing communities. We hope that more people will be inspired to start a BSL course," said Dr Terry Riley, OBE Chair of the British Deaf Association.

The decision to include BSL under UCL's MFL offer was made at an Education Committee meeting on 25 July 2017, and will come into effect for the 2017/18 academic year.