This week the spotlight is on Cengiz Tarhan, Managing Director, UCL Business (UCLB). 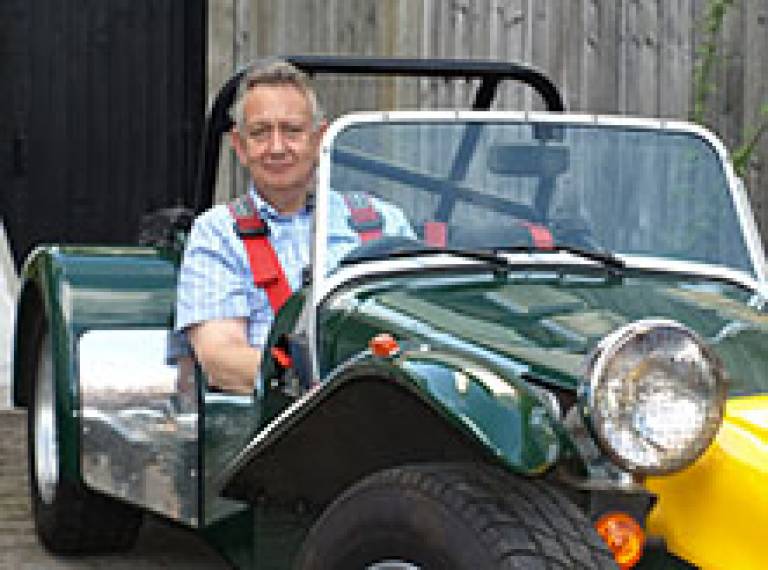 As Managing Director of UCL Business (UCLB),I can easily say no one day is the same as another. We have new opportunities and challenges every day.

UCLB is responsible for commercialising intellectual property generated by UCL's researchers. We get to work with UCL's brightest researchers and their ideas. It is a fascinating job and that's what makes this role so enjoyable. It's not to say we don't have our crisis moments - they also happen. Trying to get new ideas proved, protected, de-risked and set onto the right development pathway and securing the right partners and funding to make it a success is no mean task. When it works it is very rewarding but many good ideas also fail and not necessarily for lack of trying -that is the sad part.

We have some 800 projects on the go and every year we see some 150 new ideas with many of them being brought into UCLB pipeline and supported by our staff and the funds we have at our disposal.

Some of the highlights over the last few years have been creation of new UCL spin out companies - Autolus, Freeline, Orchard and Athena Vision, which between them have secured well over £130m external investment. We also have numerous UCL-created products selling and making a difference to our lives: from apps through to life-saving therapeutics, to diagnostics to socks - yes, Saphena compression socks are used widely across the NHS, which I had the opportunity to wear personally at the RNOH as a patient.

We have active involvement in 60 spin out companies, around 250 licences, and are supporting at least 15 therapeutic products in clinical trials destined to make impact on our lives. The long term nature of the process can sometimes be very frustrating, not only for us but also for the UCL inventors involved. Working together we have a real chance of making a difference and that's why I believe what we are doing is essential in delivering UCL's mission.

I joined UCL in 1998 with the merger of the Royal Free Hospital School of Medicine where I was Deputy Secretary and Finance Director, having been at the Royal Free in various roles since 1989. I've since had the opportunity of working in various roles at UCL, first as Head of Administration at the Royal Free Campus then Director - Commercial and Medical School Accounting and now as Managing Director UCLB, a role I was originally seconded to in 2002 and later transferred into in 2006. Working across these various roles over the last 25 plus years has been a real privilege and, when I look back, quite unbelievable. I think I'm on my fourth Provost, seventh Vice-Provost of Biomedicine/Health and third Vice-Provost for Enterprise!

This is a difficult question because there are so many ideas/projects/products/companies I have been involved in that to select just one would be wrong. However the floatation of PolYMASC Plc onto the Alternative Investment Market in 1995 does stand out because that was my first transaction that netted some £10m and those funds were used to develop 3,000sqm of space on the roof of the Medical School to house the Department of Medicine. Seeing the financial benefit being re-invested in such a good cause made that transaction even more rewarding. UCLB as the 'engine' that drives and creates all those possibilities is the company I incorporated back in 1993 under its original name FreeMedic - coming up with the name was easy: it was based at the Royal Free and part of the Medical School, however some thought we were a holiday company organising trips to the Mediterranean. The company changed its name to UCL BioMedica in 2002 when it took over responsibility for commercialising all of UCL's biomedical ideas and then became UCL Business in 2006 when we took on responsibility for all other areas. We now employ nearly 50 exceptional people and have over the last few years created a great deal of high profile spin outs, licences and assisted UCL's researchers in securing millions of pounds in translational and commercial funding. Many of those have enormous potential to cure diseases and make life changing impact on our lives in future. UCLB continues to be 100% owned by UCL and I believe creating this organisation with the help of all our staff and our Board gives us all something to be proud of for UCL.

Tell us about a project you are working on now that is top of your to - do list?

Every day brings new projects but one that's taken a number of years to put in place has been the recently launched £50m UCL Technology Fund, which we have created to invest in commercialisable and potentially income generating ideas from UCL's researchers. It is different from other funds because UCLB is integrated into the process and we can invest not only in spin out companies but also projects destined for licencing. UCLTF will invest over a period of five to seven years and we expect to see the benefits coming back to UCL not only in terms of cash but in terms of impact and making a difference to our lives over the next five to 10 years.

What is your favourite album, film and novel

Darkness on the Edge of Town by Bruce Springsteen - the classic music to drive to (in my opinion!).

There are many films but one that stuck in my memory for a long time from my childhood was The Quiet Man starring John Wayne and Maureen O'Hara. Some now see it as a cult movie and books have been written about it analysing the why's and how's. It was shot in Ireland in the 50's about the 20's. I went to visit the place it was filmed last summer, a pretty little village called Cong, straddling the border of County Galway and County Mayo. It is for tourists but the experience was nevertheless worth it.

I'm not a serious novel reader and prefer science fiction so some of Alan Moore's books and particularly his graphic novels are interesting, I also found Neil Gaiman's, American Gods a good read.

What is your favourite joke (pre-watershed)

There are three signs of old age: loss of memory… I forget the other two!

Sultan Mehmed II - I've always been fascinated by his tactics during the conquest of Constantinople. For a little lighter relief, Mario Andretti - a very special racing car driver who not only won the Formula One World Championship but also the Indy500 and Daytona 500; and for the fun of it, Dave Allen - Irish comedian from the 70's who frequently took religion to task with his jokes.

Persevere - if you believe in something keep going despite what others may say.

I have a keen interest in anything to do with Lotus cars - road going or racing, from toy corgi, dinky and matchbox models to the real things. Some may remember the Lotus event organised in October 2007 at UCL where we brought in some 30 cars to display in the quad. That was a very special UCL day for me.

In my spare time I can be seen 'blatting', a terminology used by Lotus 7 drivers, in my classic yellow cone, BRG flared wings Caterham 7.

Hills and mountains above Patara in Turkey - a 16km stretch of sand and behind it antiquities galore dating back to the Lycian era 2nd/3rd century BC. Reputedly the birthplace of the Bishop of Myre, better known to us all as St Nicholas and latterly Santa Claus.