The Orwell Prize moves to UCL

Prestigious political writing award The Orwell Prize has moved to the UCL Institute of Advanced Studies. 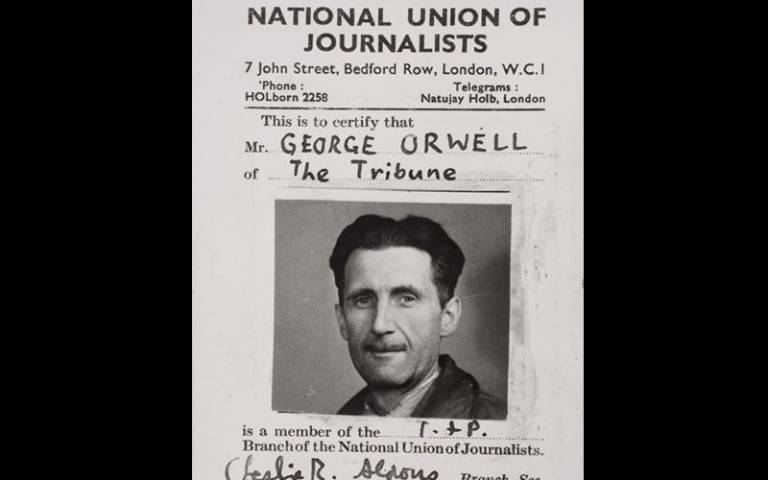 UCL is already home to the Orwell Archive, part of UCL Special Collections. The archive is the most comprehensive body of research material relating to George Orwell anywhere.

Professor Tamar Garb, Director of the UCL Institute of Advanced Studies, said: "The Orwell Prize's move to UCL is as logical as it is exciting. UCL has been home to the Archive since 1960 - it was deposited at UCL on permanent loan by his widow, ten years after Orwell's death from tuberculosis at University College Hospital - and has hosted the Orwell Lecture since 2013.

"Now, the Orwell Prize will be based at UCL's Institute of Advanced Studies. The Orwell Prize is a natural fit within our commitment to critical thinking across conventional disciplinary boundaries. We look forward to working with The Orwell Prize to develop Orwell scholarship, and to stimulate cultural and political discourse in the name of one of the world's most incisive and relevant writers."

The Orwell Prize is Britain's most prestigious prize for political writing and a registered charity providing free cultural events and resources for the public benefit. Every year, prizes are awarded to the work which comes closest to Orwell's ambition 'to make political writing into an art'.

The Prize's move to UCL was announced at a debate to celebrate the launch of the Orwell Prize 2017 held in London last night. It was also announced that Ian Hislop will give the Orwell Lecture 2016 on Tuesday 15 November at UCL. The judges for the 2017 prizes were also revealed.

Jean Seaton, Director of the Orwell Prize, said: "Arriving at UCL - home of the Orwell Archive - is an exciting moment in the development of the Orwell Prize. Orwell's focus on the slipperiness of political language is particularly compelling in our own uncertain times, and this year's Orwell judges will be unearthing a selection of the best, bleakest, most inspiring, most intelligent thinking in writing and journalism.

"The Prize depends on both the authority and variety of tastes that the judges bring to the process and this year we have a stellar collection. But the first thing we have to offer is one of the great public moralists of the moment, Ian Hislop, giving the Orwell Lecture 2017".

Ian Hislop is a writer, editor and broadcaster. He has been editor of Private Eye since 1986. He is probably best known for his role as a regular team captain on the BBC show 'Have I Got News for You'.

The Orwell Lecture has been given annually since 1989. Recent Orwell Lecturers include Dr Rowan Williams, former Archbishop of Canterbury (2015), Professor Tariq Ramadan, Professor of Contemporary Islamic Studies at the University of Oxford (2013) and Dame Hilary Mantel, two-time winner of the Man Booker Prize for Fiction (2009). The Orwell Lecture is open to the public and tickets are free and available from The Orwell Prize website.

Watch a video about The Orwell Prize and UCL: