Narrowing the window on sterile neutrinos

A major international collaboration between the MINOS experiment, which involves UCL scientists, and the Daya Bay experiment has today announced results which shed new light on one of the most pressing questions in particle physics - do sterile neutrinos exist? Sterile neutrinos are a suggested fourth neutrino alongside the well-known electron, muon and tau neutrinos. 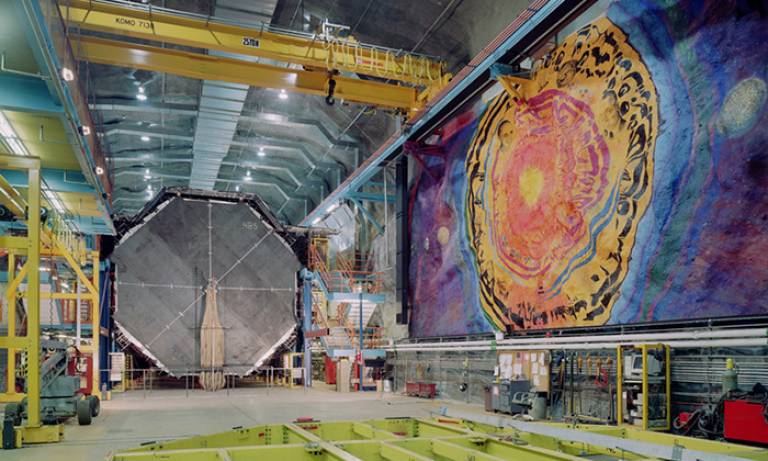 They were first proposed in the 1990s following the LSND experiment at the Los Alamos National Laboratory when muon neutrinos seemed to turn into electron neutrinos.

The oscillations which would have caused this neutrino metamorphosis were much faster than those discovered by Super-Kamiokande that led to the 2015 Nobel Prize in Physics. This suggested the existence of a new, fourth type of neutrino which would have to be much stranger than anything seen before - the sterile neutrino - with 'sterile' meaning that it does not interact with matter except through gravity.

Over the last twenty years, a number of experiments have tried to confirm or refute the LSND findings, but the results have been inconclusive.

The results published today in Physical Review Letters by the MINOS and Daya Bay experiments strongly suggest that ghost-like sterile neutrinos do not explain the LSND result after all.

"Although we haven't found them yet, we've significantly narrowed down the sterile neutrino's hiding places through our work with the MINOS experiment, which UCL has been involved in since 1996."

Dr Leigh Whitehead (UCL Physics & Astronomy) and MINOS analysis coordinator, said: "This is a very strong result that excludes most of the possible sterile neutrino oscillation scenarios that could explain the LSND result, and places strong limits on the existence of the sterile neutrino."

The MINOS experiment uses an intense beam of muon neutrinos that travels 735 km from the Fermi National Accelerator Laboratory in Chicago to the Soudan Underground Laboratory in northern Minnesota. MINOS has made world-leading measurements to study how these neutrinos disappear as they travel between the two detectors. The existence of a sterile neutrino could cause some of these muon neutrinos to disappear at a faster rate than one would expect if sterile neutrinos do not exist. Scientists working on the MINOS experiment have shown that this does not happen.

However, in isolation, each of the results from MINOS and Daya Bay are not enough to address the puzzle that the LSND experiment set out almost twenty years ago.

"Neither the MINOS nor Daya Bay disappearance results alone can be compared to the LSND appearance measurements," said En-Chuan Huang of Los Alamos Laboratory and the University of Illinois at Urbana-Champaign, one of the scientists working on the Daya Bay experiment. "Looking at multiple types of neutrinos together gives us a much stronger handle on sterile neutrinos."

"It's not common for two major neutrino experiments to work together this closely", said Adam Aurisano of the University of Cincinnati, one of the MINOS scientists who worked on the result. "But to really make a statement about the LSND evidence for sterile neutrinos, we must take Daya Bay's electron-antineutrino data and the MINOS muon-neutrino data and put them both together into a single analysis."

Both the MINOS and Daya Bay experiments are continuing to analyze more data, and an even more sensitive search for the sterile neutrino is anticipated.

Professor Thomas added: "Data taking with MINOS+, the successor to MINOS, has recently finished and the data will enable us to significantly improve on today's MINOS results. We expect our final results to be published early next year."