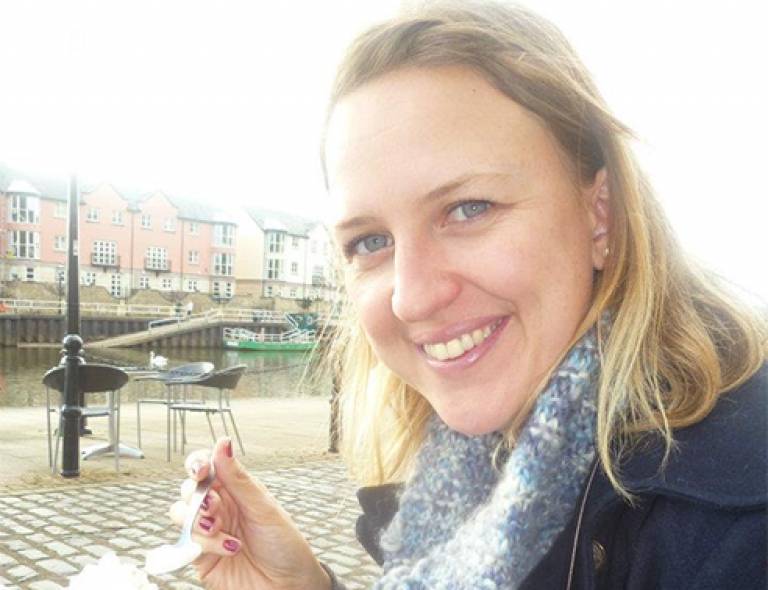 I've been here since January, though it feels like longer as there's so much going on! Prior to UCL I worked in communications for charities supporting non-formal education opportunities for young people: The Duke of Edinburgh's International Award Foundation and a national youth club charity called Ambition. Before that I was a journalist at the Birmingham Mail.

I joined Ambition on the eve of rolling out a major rebrand to its nationwide network of members. It was a completely new direction for the charity, which is 90 years old, and definitely felt like being thrown in at the deep end but I also learned a lot.

This week I am supporting a small UCL delegation at the India-UK TECH Summit in New Delhi, which Theresa May, Jo Johnson and Liam Fox have attended. The summit was set up with 2016 being the UK-India Year of Education, Research and Innovation, and it's a great opportunity for UCL to explore further opportunities for engagement, building on a successful scoping visit led by the Vice-Provost International earlier in the year. There's an increasing demand in India to study engineering in new ways to tackle challenges facing society, so UCL Science, Technology, Engineering and Public Policy's 'How to Change the World' programme has received considerable interest.

This is a really difficult question as I like a lot of different things. But if you're twisting my arm: The Bends by Radiohead, L'Auberge Espagnole, and Jane Eyre by Charlotte Brontë.

I did languages at university so in honour of that:

"The past, present and future walked into a bar. It was tense."

My family, who I rarely have all together, and Stephen Fry, Michael Palin and Lee Mack. And Michel Roux to cook said dinner.

Something my mum always used to say to me: it will all come out in the wash (I'm not sure if she was talking about life's challenges or just mucky clothes, but both are true).

I won a competition to be a roving reporter for a Nickelodeon TV series filmed in America when I was 12. Sadly I let a friend cut my hair just before we started filming and so had a really dodgy haircut throughout my 15 minutes of fame.

I've travelled and worked in Latin America a lot and love it there. The Lençóis Maranhenses sand dunes in the north of Brazil feel like you've stumbled into a Photoshopped picture.