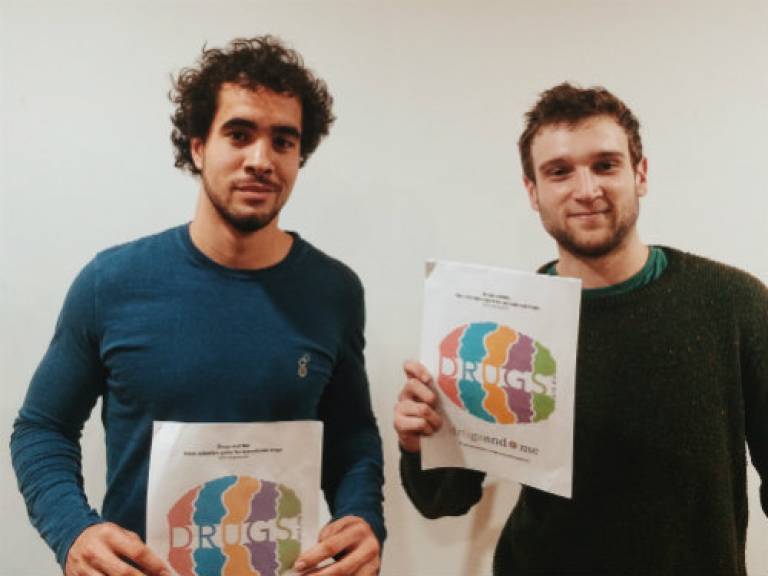 drugsand.me/">drugsand.me, an "educational website that teaches about the existing harm reduction methods for drug users."

Drug use is rising across Europe, and one in four Europeans over the age of 15 have tried illegal drugs at least once, according to the European Monitoring Centre for Drugs and Drug Addiction (EMCDDA).

"We realised that people didn't really know what they were taking, including alcohol, and that's very dangerous for the individual," say Lubroth, a UCL Biochemical Engineering MSc student.

The three founders of Drugs and me believe drug education is the best way to prevent harm and deaths related to drug use, and are collaborating with Professor David Nutt, founder and Chair of DrugScience (formerly Independent Scientific Committee on Drugs), the Beckley Foundation, a UN-accredited NGO, and Valerie Curran, Professor of Psychopharmacology at UCL.

Drugs and me aims to become "the go-to hub for people who want to learn about drug use, if they're worried about the effects, or they want to understand what's going on without having to rely on sources that give them the wrong idea," says Lubroth.

This year the United Nations Office on Drugs and Crime reported that criminalising rather than treating demand does is not working in the strategy against the global drug problem.

Lubroth says harm reduction does not encourage drug use but is "about taking a more rational approach and trying to help students understand what they're taking and if they encounter a problem, help them. At universities, in terms of mental health people are helped with anxiety and depression etc. but there is not a lot of advice about addiction, which is also a mental health problem."

Lubroth and Ezquerra Romano, who is a UCL Neuroscience student, say their studies at UCL have helped them build the site. "We are able to read and summarise really detailed scientific papers, says Ezquerra Romano, "and we thought the best way to present the information is a website with very concise guides. Gabriel did the graphic design and the website structure. We have done four drugs because they are the most popular ones, but there's still a lot to cover."

Effects and risks of drugs

Drugsand.me currently provides information about the effects and risks of alcohol, cocaine, MDMA and cannabis. Lubroth says, "there's such a disparity between how people think about drugs and alcohol, most people forget that alcohol is a very powerful drug and should be taken as carefully as any other drug."

The students had discussed their ideas and decided to put them into action after a number of deaths caused by the substance PMA being apparently mistaken for MDMA.

"We think that could be prevented by knowing that if you buy drugs in the street they're probably laced with other things that are not what you expect," says Ezquerra Romano. "One of the things we advise on the website is to use drug testing kits, which you can buy online."

Over the summer they will be collaborating with David Nutt and the Beckley Foundation, to write guides to psychedelics and other drugs guides, and will be producing pamphlets for the freshers' information pack. They are also inviting new collaborations. "For the information side it would be better for the person to have a life science or bioscience background," says Ezquerra Romano, "but anyone from UCL or any other university would be very welcome to help us if they are interested in the project."