A region of the brain that responds to bad experiences has the opposite reaction to expectations of aversive events in people with depression compared to healthy adults, finds a new UCL study funded by the Medical Research Council. 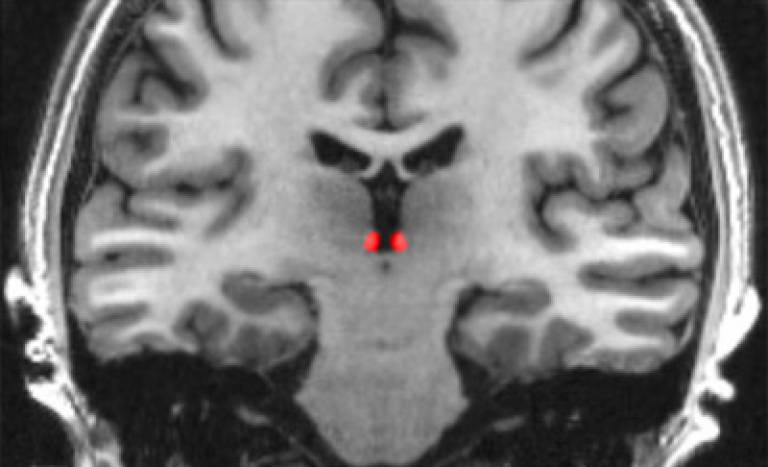 The study, published in Molecular Psychiatry, found that the habenula, a pea-sized region of the brain, functions abnormally in depression. The same team previously showed that the habenula was activated in healthy volunteers when they expected to receive an electric shock.

"A prominent theory has suggested that a hyperactive habenula drives symptoms in people with depression: we set out to test that hypothesis" says senior author Professor Jonathan Roiser (UCL Institute of Cognitive Neuroscience). "Surprisingly, we saw the exact opposite of what we predicted. In people with depression, habenula activity actually decreased when they thought they would get a shock. This shows that in depressed people the habenula reacts in a fundamentally different way. Although we still don't know how or why this happens, it's clear that the theory needs a rethink."

The researchers scanned the brains of 25 people with depression and 25 never-depressed individuals using high-resolution functional magnetic resonance imaging (fMRI). The participants were shown a sequence of abstract pictures while they lay inside the scanner. Over time they learned that different pictures were associated with a chance of different outcomes - either good or bad. Images predicting electric shocks were found to cause increased habenula activation in healthy volunteers, but decreased activation in depressed people.

There were no differences in average habenula size between people with depression and healthy volunteers. However, people with smaller habenulae, in both groups, were found to have more symptoms of anhedonia, a loss of interest or pleasure in life.

"The habenula's role in depression is clearly much more complex than previously thought," explains lead author Dr. Rebecca Lawson (UCL Wellcome Trust Centre for Neuroimaging, Institute of Neurology). "From this experimental fMRI study we can draw conclusions about the effects of anticipated shocks on habenula activation in depressed individuals compared with healthy volunteers. We can only speculate as to how this deactivation is linked to symptoms, but it could be that this ancient part of the brain actually plays a protective role against depression. Animal experiments have shown that stimulating the habenula leads to avoidance, and it is possible that this occurs for mental as well as physical negative events. So one possible explanation is that the habenula may help us to avoid dwelling on unpleasant thoughts or memories, and when this is disrupted you get the excessive negative focus that is common in depression."