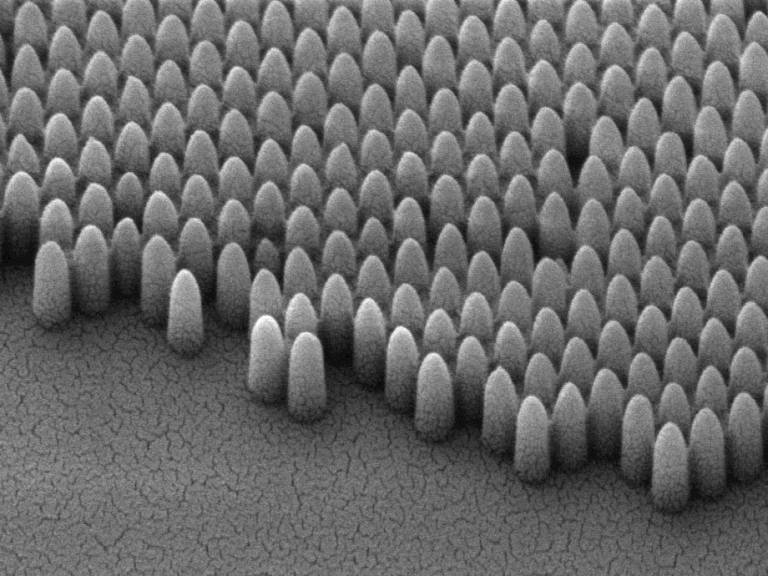 The windows use nature inspired nanostructures which mimic the eyes of moths to cut glare, save energy and clean themselves. The prototype glass was developed with support from the Engineering and Physical Sciences Research Council (EPSRC) and tests confirm it delivers three key benefits:

· Self-cleaning: The window is ultra-resistant to water, so rain hitting the outside forms spherical droplets that roll easily over the surface - picking up dirt, dust and other contaminants and carrying them away. This is due to the pencil-like, conical design of nanostructures engraved onto the glass, trapping air and ensuring only a tiny amount of water comes into contact with the surface. This is different from normal glass, where raindrops cling to the surface, slide down more slowly and leave marks behind.

· Energy-saving: The glass is coated with a very thin (5-10 nanometre) film of vanadium dioxide which during cold periods stops thermal radiation escaping and so prevents heat loss; during hot periods it prevents infrared radiation from the sun entering the building. Vanadium dioxide is a cheap and abundant material, combining with the thinness of the coating to offer real cost and sustainability advantages over silver/gold-based and other coatings used by current energy-saving windows.

· Anti-glare: The design of the nanostructures also gives the windows the same anti-reflective properties found in the eyes of moths and other creatures that have evolved to hide from predators. It cuts the amount of light reflected internally in a room to less than 5% - compared with the 20-30% achieved by other prototype vanadium dioxide-coated energy-saving windows - with this reduction in 'glare' providing a big boost to occupant comfort.

Project leader, Dr Ioannis Papakonstantinou (UCL Electronic & Electrical Engineering), said: "This is the first time that a nanostructure has been combined with a thermochromic coating. The bio-inspired nanostructure amplifies the thermochromics properties of the coating and the net result is a self-cleaning, highly performing smart window."

The team calculate that the windows could result in a reduction in heating bills of up to 40%, with the precise amount in any particular case depending on the exact latitude of the building where they are incorporated. Windows made of the ground-breaking glass could be especially well-suited to use in high-rise office buildings.

Dr Papakonstantinou, explained: "It's currently estimated that, because of the obvious difficulties involved, the cost of cleaning a skyscraper's windows in its first 5 years is the same as the original cost of installing them. Our glass could drastically cut this expenditure, quite apart from the appeal of lower energy bills and improved occupant productivity thanks to less glare. As the trend in architecture continues towards the inclusion of more glass, it's vital that windows are as low-maintenance as possible."

Professor Ivan Parkin (UCL Chemistry), said: "We are currently in discussions with UK manufacturers with the aim of driving this new window concept through to commercialisation. The key to this will be scaling up the nano-manufacturing methods we have developed to produce the glass, as well as the process of coating it in vanadium dioxide."

Smart windows could begin to reach the market within around 3-5 years, depending on the team's success in securing industrial interest. A 5-year European Research Council (ERC) starting grant (IntelGlazing) has been awarded to the UCL team to develop smart windows on a large scale and test them under realistic, outdoor environmental conditions.

PhD student and lead researcher, Alaric Taylor (UCL Electronic & Electrical Engineering), added: "In addition to developing the glass, we hope to create a 'smart' film that incorporates our nanostructures and can easily be applied to conventional windows using a DIY approach. We'd develop it so the film still delivers the same benefits as the glass without significantly affecting aesthetics."

Professor Philip Nelson, Chief Executive of EPSRC, said: "This project is an example of how investing in excellent research drives innovation to produce tangible benefits. In this case the new technique could deliver both energy savings and cost reductions."