Saturn and Enceladus produce the same amount of plasma

The first evidence that Saturn's upper atmosphere may, when buffeted by the solar wind, emit the same total amount of mass per second into its magnetosphere as its moon, Enceladus, has been found by UCL scientists working on the Cassini mission. 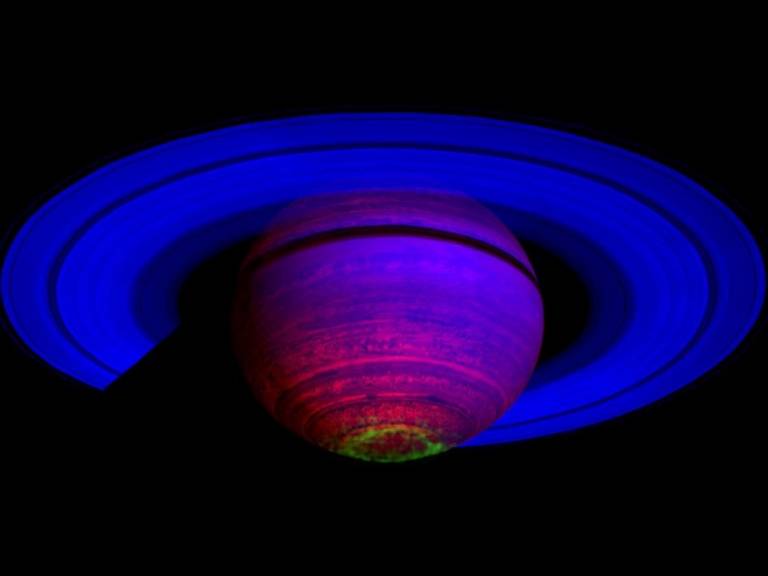 Magnetospheres are regions of space that are heavily influenced by the magnetic field of a nearby planet and can contain charged particles in the form of plasma from both external and internal sources.

In the case of Saturn, its moon Enceladus ejects water from its icy plumes which is ionised into H2O+, O+, OH+ and then transported throughout the magnetosphere. For Jupiter, its moon Io provides plasma from its sulphurous volcanoes whereas Earth's magnetosphere is strongly driven by the solar wind but fed by a polar wind from the ionosphere - the atmospheric layer ionised by solar and cosmic radiation.

The Cassini mission previously established the importance of Enceladus as the dominant mass source for Saturn's magnetosphere but this is the first time that Saturn's ionosphere has been seen providing, at times, a similar plasma production rate.

The study, published in the Journal of Geophysical Research, reports on an event measured by the Cassini spacecraft on 21 August 2006 while it was traversing Saturn's magnetotail - the part of the magnetosphere compressed and confined by the solar wind. This compression causes quite dynamic, large changes to take place resulting in auroras containing energised ions and electrons.

At the time of the measurement Saturn's magnetosphere was compressed by a region of high solar wind dynamic pressure and Cassini remotely observed aurora near Saturn's north pole. The composition of particles Cassini was measuring in the magnetotail was also different from normal. The water group ions disappeared, but in their place Cassini measured particles, and specifically H+ ions, which is consistent with what would be expected for ionospheric outflow coming from Saturn's upper atmosphere.

First author and PhD student, Marianna Felici (UCL Mullard Space Science Laboratory), said: "By measuring the flux of particles in the magnetotail and mapping them to the auroral outflow region, we calculated that the total amount of mass emitted per second may be as large as the rate at which mass is emitted from Enceladus. It is unknown how much of this mass stays in the magnetosphere and how much escapes down the magnetotail and joins with the solar wind."

These are the first measurements that investigate what role ionospheric outflow plays at a giant planet, and gives a more dynamic picture of what Saturn's magnetosphere is like. It is well known that the ionosphere is an important mass source at Earth during periods of intense geomagnetic activity when a 'polar wind' is observed, but these are the first direct measurements of the ionospheric mass source at Saturn.

Professor Andrew Coates, a co-author on the paper and Cassini co-investigator, said: "Cassini never ceases to amaze us. First, it found that the plume of Enceladus is the main source of the water-rich magnetosphere which ultimately escapes from the planet. Now, we find that solar wind compression allows much lighter hydrogen ions to escape from Saturn's upper atmosphere at times."

Cassini is approaching its Grand Finale where the new orbital configuration will allow an even clearer picture of what role the ionosphere may play as a mass source at Saturn. These studies will be complementary to the Juno mission, which is also interested in sources of magnetospheric composition. Juno is due to arrive at Jupiter in July 2016.