This week, meet Stella Prins a PhD student in Dr Paola Vergani's group based in UCL's Department of Neuroscience, Pharmacology and Physiology. 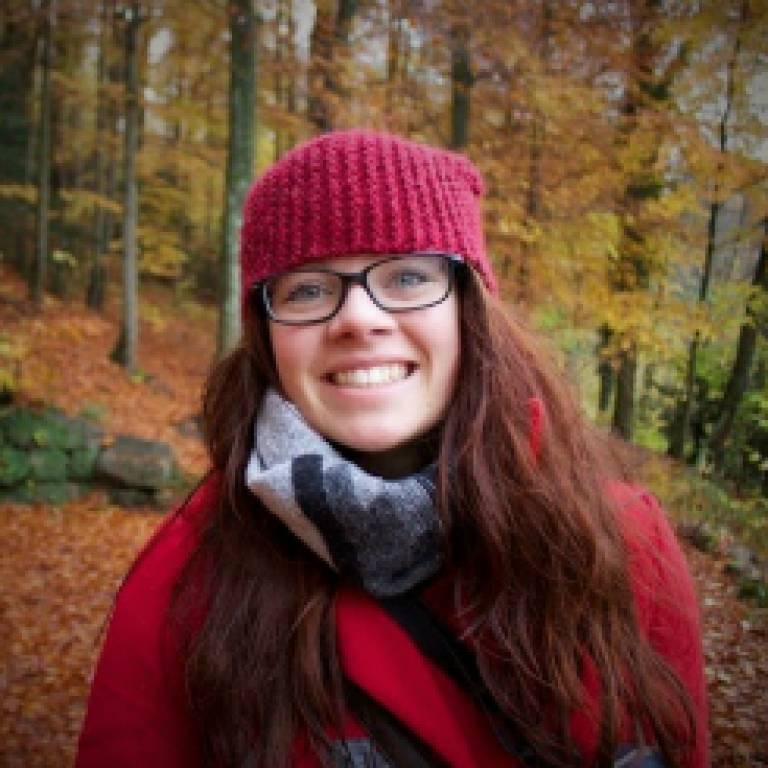 Stella and her group are studying the Cystic Fibrosis Transmembrane Conductance Regulator (CFTR), a defect in this protein causes cystic fibrosis. Stella is also trying to raise awareness of the funding difficulties experienced by PhD students during periods of illness, following her own experience with thyroid cancer.

Tell us more about your research project:

For my PhD project I am studying the CFTR protein, which regulates the movement of salt and water in and out of cells that line various ducts in the body. You could say that CFTR functions as a kind of water tap for these cells. Cystic fibrosis is the most prevalent lethal genetic disease in the UK, and is caused by mutations in the CFTR gene.

The most common one is called F508del; present in approximately 90% of the patients with cystic fibrosis. When the F508del mutation is present, building block number 508 (an amino acid called phenylalanine) is deleted from the CFTR protein, which will then be called F508del-CFTR.

The deletion of this small piece of protein has a huge impact. It causes F508del-CFTR to misfold, and consequently it cannot do what it is supposed to do. You could say that the water tap is no longer functioning correctly. As a result, sticky mucus is produced on the cell surface, creating a range of problems in the lungs, pancreas, intestines, and other parts of the body. Persistent lung infections often require intravenous antibiotics involving long hospital stays and eventually, for many patients, a double lung transplant.

With my project, I am investigating this how we can we restore the function of F508del-CFTR by introducing the F508del mutation. Together with other mutations, at a second site in the CFTR gene. The effect of these second-site mutations on the function of the protein can be measured with tests that were developed in our research group.

Hopefully, I will be able to identify second-site mutations that correct the defects caused by the F508del mutation. These could give us important clues about the properties a drug needs to have in order to successfully increase the function and trafficking of F508del-CFTR.

What makes it so important (and interesting)?

Eventually, our research could lead to the development of better drugs to treat the most common form of cystic fibrosis. It is amazing to know that we can potentially contribute to this process!

What has been a personal highlight so far?

In my first year, I got the opportunity to present my first data on the 13th ECFS Basic Science Conference in Pisa. I was quite nervous because I was only six months into my PhD and there were many renowned scientists in the audience.

Luckily, in the end, everything went fine and I had a great time at the conference. It was nice to meet other PhD students, and it was very interesting to meet and talk to the scientists whose papers I had been reading.

I also got the chance to present my project to an audience mainly consisting of people who suffer from cystic fibrosis, as well as their friends and families. Because there is a risk of cross-infection, people with cystic fibrosis cannot gather together, so the audience followed the presentations online.

Although there were barely 50 people in the lecture theatre, I was told that over 2000 people were watching the live stream! Pretty nerve-racking.

My sister! She often gives me great advice. For example, she thought me how to declutter my wardrobe (inspired by Marie Kondo's Japanese Art of Decluttering and Organizing). She is also critical and honest without being harsh, so just talking to her can help me to see things in perspective.

Furthermore, she is fluent in Japanese, worked as junior Editor for the Dutch National Geographic Traveler magazine, and is now a freelance journalist living in Galway. When she turned 25, she started a personal project called 'A first a day', in order to challenge herself by doing something new for the first time every day. She is also thinking about starting a food truck with 'poffertjes' (little Dutch pancakes) in Japan.

Describe your perfect evening (or weekend) after a long week.

I would grab my bicycle on Saturday morning and cycle through the Lee Valley Park to Cambridge. The route is beautiful and I always find that cycling takes my mind off things. On Saturday evening I would join my boyfriend, who lives in Cambridge, to attend a formal dinner at his college.

On Sunday afternoon we would visit the Fitzwilliam museum, read a book and have coffee somewhere in town. Before I would take the train back to London on Sunday evening, we would have dinner and watch an episode (or two) of Black Mirror or Mr. Robot. Alternatively, I would stay in London to visit one of the many great museums or exhibitions, and explore the food markets.

Explain some of the challenges involved in working on a research project.

Doing a PhD programme is a rewarding experience, but it can also be a challenging one. In a few years time, you are expected to master new techniques, and to produce a solid body of scientific work. Although you are likely to work more than 40 hours a week, because of your learning status you are considered to be a student.

Most PhD students in the UK receive a tax-free stipend instead of a salary. This is cheaper than employing PhD candidates with a staff contract, and thus creates more PhD positions.

However, the major downside is that these student contracts often come with fewer rights. It is not uncommon for PhD students to have no rights to maternity/paternity or sick leave.

I became painfully aware of this issue after I was diagnosed with thyroid cancer and had to take time off to undergo surgeries and treatment. In the UK, a PhD student's funding is often at risk of becoming suspended when they fall ill. In these cases, universities often do not step in to cover the costs. This causes a significant additional amount of stress on top of the stress that comes along with facing an illness.

I soon realized I was not the only student in this situation. I contacted Edwin, who I met a few years back during my MSc programme, after reading his blog post 'Cancer during your PhD? Sucks!'. Soon, we became aware that another student, Claudia, who had been diagnosed with cancer during her PhD. She described her experience in a blog post - 'PhD funding during illness: cancer, consequences & suggestions for change'.

In our opinion, all PhD students should have the right to paid sick leave. This does not necessarily mean that all PhD students should get a staff contract without the advantage of a tax-free income. You can imagine a situation in between, where the student status is retained but universities ensure that every PhD scholarship includes a basic right to sick leave. This right should be guaranteed by either the funding body or by the University.

Together with Claudia and Edwin, I wrote a letter about this issue to raise awareness and submitted it to Nature. Our letter was published last month, entitled 'Illness should not curtail PhD funding'.

I am also in contact with the postgraduate representative of the UCLU to see whether we can improve the situation for PhD students at UCL.

To end on a positive note, I am going to be fine. The treatment for the type of cancer I have is very effective and has little side effects. It was a great relief when, a couple of weeks ago, I heard that the scan did not show any metastasis.

I would make sure all PhD students at UCL have rights to sick leave and maternity/paternity leave.