Making an assistive robot partner expressive and communicative is likely to make it more satisfying to work with and lead to users trusting it more, even if it makes mistakes, a new UCL-led study suggests. 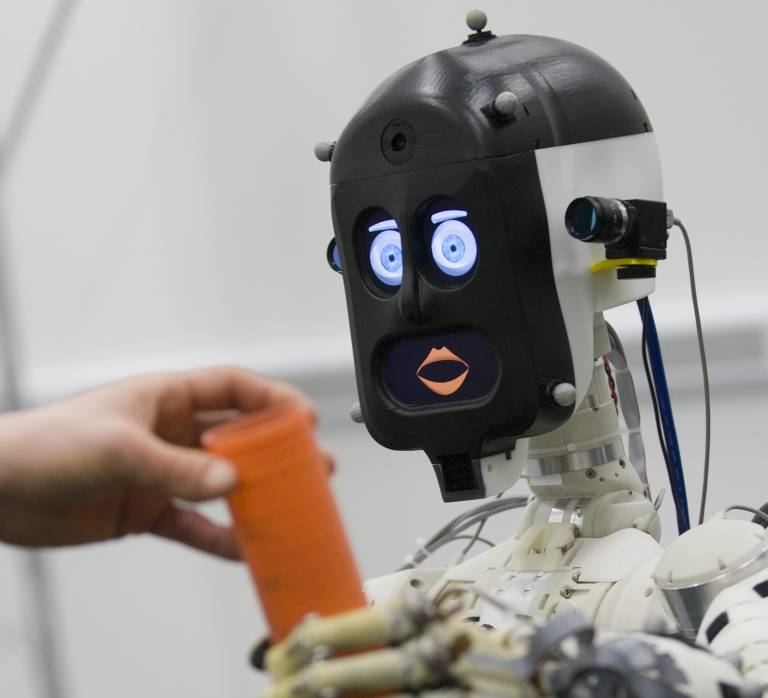 But the research also shows that giving robots human-like traits could have a flip side - users may even lie to the robot in order to avoid hurting its feelings.

Researchers from UCL and the University of Bristol experimented with a humanoid assistive robot helping users make an omelette. The robot was tasked with passing the eggs, salt and oil but dropped one of the polystyrene eggs in two of the conditions and then attempted to make amends.

The aim of the study was to investigate how a robot may recover a user's trust when it makes a mistake and how it can communicate its erroneous behaviour to somebody who is working with it, either at home or at work.

The study suggests a communicative, expressive robot is preferable for the majority of users to a more efficient, less error-prone one, despite it taking 50 per cent longer to complete the task.

Users reacted well to an apology from the robot that was able to communicate, and were particularly receptive to its sad facial expression. The researchers say this is likely to have reassured them that it 'knew' it had made a mistake.

"Human-like attributes, such as regret, can be powerful tools in negating dissatisfaction but we must identify with care which specific traits we want to focus on and replicate. If there are no ground rules then we may end up with robots with different personalities, just like the people designing them," said Adriana Hamacher, who conceived the study as part of her MSc in Human Computer Interaction at UCL.

At the end of the interaction, the communicative robot was programmed to ask participants whether they would give it the job of kitchen assistant, but they could only answer yes or no and were unable to qualify their answers.

Some were reluctant to answer and most looked uncomfortable. One person was under the impression the robot looked sad when he said 'no,' when it had not been programmed to appear so. Another complained of emotional blackmail and a third went as far as to lie to the robot.

"We would suggest that, having seen it display human-like emotion when the egg dropped, many participants were now pre-conditioned to expect a similar reaction and therefore hesitated to say no; they were mindful of the possibility of a display of further human-like distress," explained Adriana Hamacher.

Professor Kerstin Eder of the Bristol Robotics Laboratory, who co-supervised Adriana Hamacher's project, said: "Trust in our counterparts is fundamental for successful interaction. Adriana's study gives key insights into how communication and emotional expressions from robots can mitigate the impact of unexpected behaviour in collaborative robotics. Complementing thorough verification and validation with sound understanding of these human factors will help engineers design robotic assistants that people can trust."

The project was aligned with the EPSRC funded project Trustworthy Robotic Assistants, where new verification and validation techniques are being developed to ensure safety and trustworthiness of the machines that will enhance our quality of life in the future.

The research will be presented at the IEEE International Symposium on Robot and Human Interactive Communication (RO-MAN), taking place from 26 to 31 August in New York, and published by the IEEE as part of the conference proceedings available via the IEEE Xplore Digital Library.