UCL has agreed a £280 million loan with the European Investment Bank to develop its Bloomsbury and UCL East campuses, the largest sum ever lent by the bank to a university. 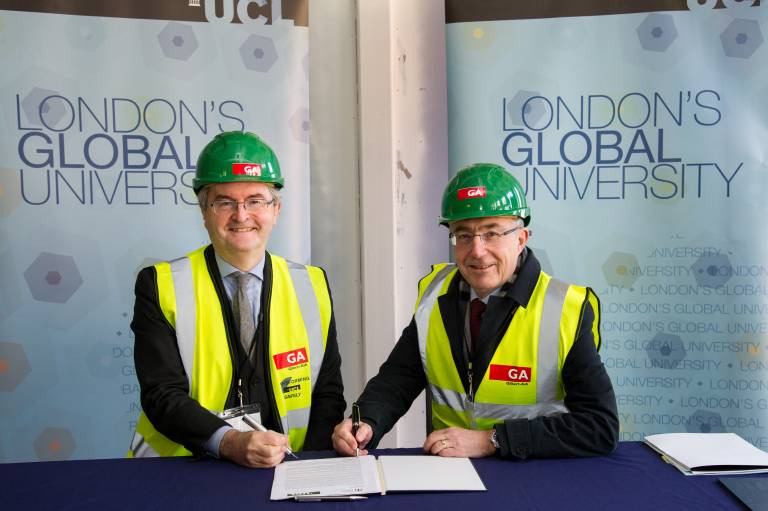 The 30-year loan will provide funding for UCL's Bloomsbury campus in central London which is undergoing an ambitious programme to upgrade and expand its historic buildings as well as finance for the building of UCL East, the university's new site at the Queen Elizabeth Olympic Park in east London.

UCL is investing £1.25 billion over 10 years to implement its Transforming UCL programme, which includes developing the two campuses as well as other projects across London, to support growth in its world-leading teaching and research and create a more vibrant, student-focused environment.

It is the largest capital investment programme UCL has undertaken since the building of its original campus, and is one of the biggest being carried out in the higher education sector in the UK.

Projects in Bloomsbury include the refurbishment and expansion of the prestigious Bartlett School of Architecture which will house nearly 1,000 staff and students and the building of a new student centre, on which construction started this year. Investment in the Bloomsbury campus is expected to be around £740 million.

When the Transforming UCL programme was published five years ago, it was clear that further growth in Bloomsbury would be constrained. In 2014, the university announced that it would build UCL East, a new campus at the Queen Elizabeth Olympic Park to form part of the wider Olympicopolis education and cultural quarter.

UCL East is envisaged as a radical new model of how a university campus can be embedded in the local community and with businesses.

The new campus will bring together cross-disciplinary UCL expertise in such areas as creativity and material culture, future global cities, experimental engineering, and education and research through public service, including the UCL Centre for Access to Justice. The first phase of UCL East is due to open during the 2019/2020 academic year.

The loan agreement was formally signed during a visit to UCL by Jonathan Taylor, Vice President of the European Investment Bank. The loan follows the investment of £25 million in January in the new UCL Technology Fund by the European Investment Fund, which is part of the EIB group and provides risk finance to small and medium sized enterprises across Europe.

Professor Michael Arthur, UCL President & Provost, said: "UCL is proud of its world-class teaching and research and this support from the European Investment Bank will help us deliver our ambitious growth plans, enhancing facilities for students and allowing our academics to continue to tackle key global research challenges. Our investment in our Bloomsbury and UCL East campuses is substantial and will support our activities for decades to come, allowing us to deliver on the UCL 2034 programme which sets out our 20 year strategy."

Jim O'Neill, Commercial Secretary to the Treasury, said: "Supporting Britain's world-class universities is crucial to the success of our economy, and this significant investment by the EU's bank, the largest sum ever given to a university, is set to transform UCL's two campuses. This £280 million loan will help grow its world-leading research and teaching facilities, building on the millions of pounds worth of investment already secured from the European Investment Fund. It is a strong example of the benefits that money from the European Investment Bank can bring to support our leading universities across the country."

Jonathan Taylor, Vice President of the European Investment Bank, said: "The European Investment Bank recognises the impressive and ambitious development planned at UCL that will strengthen world class research, transform teaching facilities and improve student life, as well as creating a new centre of learning in Stratford. This new £280m 30-year loan represents the largest ever EIB backing for investment at a European University, and reflects the EIB's commitment to strengthen the local and global role of leading universities. The EIB has supported more university investment in the UK than any other country and provided more than GBP 2.1 billion for investment at 30 universities across the UK over the last six years."

Since 2010 the European Investment Bank has provided GBP more than 2.1 billion for transformational investment at thirty universities across the UK. This has included new campuses in Swansea and Belfast, cutting edge research facilities in Oxford and Edinburgh, the world-class Technology and Innovation Hub at Strathclyde and new research and teaching facilities in Newcastle, Birmingham, Hull and Lincoln.