This week the spotlight is on Dr Jennifer Rohn, Principal Research Associate at the Centre for Nephrology in the Division of Medicine. 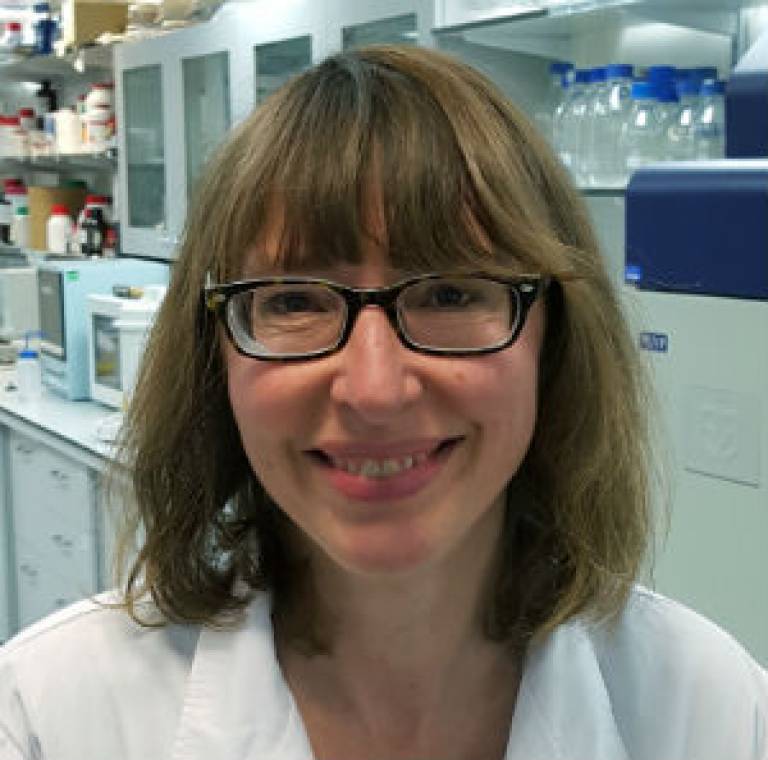 I'm a principal investigator and, like most scientists in academia, I wish I could clone myself to make juggling the various aspects of the job easier.

First and foremost, I lead a laboratory research group on the Royal Free campus, trying to understand the subversive behaviour of the bacteria involved in chronic urinary tract infection. This involves supervising the researchers as well as writing an endless series of grants and papers.

I am also heavily involved in teaching undergraduates, both on the Division's new Applied Medical Sciences course, as well as overseeing a constant influx of students doing BSc projects in the lab - they keep me young. And then there is committee work, meetings, mentoring - and the less glamorous stuff they never teach you in scientist school, like organizing equipment repair or updating your risk assessment forms.

Last but certainly not least, I'm currently the Athena SWAN lead for the Division as we gear up to renew our Silver award.

Each of these roles could take up all of your time if you let it, so you have to be very careful with how you balance everything.

I joined UCL in 2007 and worked as a Wellcome Trust Career Re-entry Fellow in the MRC Laboratory for Molecular Cell Biology.

As the name of my fellowship implied, I was returning to research after a sizeable career break from academia. Following a sensible start as a post-doctoral researcher at Cancer Research UK, I'd veered wildly off-piste to do time in a start-up biotech company in the Netherlands, followed by a number of years in scientific publishing with a side-line as a paid freelance science writer and consultant.

Although I flourished in these interesting new environments and learned an enormous amount, academia eventually lured me back. I've found that I've been able to use skills I gained outside to my advantage: for example, I've now got a keen eye for exploitable intellectual property after my stint in industry, and working as an editor rejecting scientific manuscripts is a remarkably good way to improve your paper-writing skills.

Like most researchers who've been in the game for a few decades, I've made a series of important contributions to scientific knowledge. But in some ways I'm prouder of the things I've managed to achieve in my spare time that are off the beaten track.

I'm the founder and chair of Science is Vital, a well-respected grassroots organization of scientists and science supporters that has been remarkably successful in helping to stave off serious cuts to the UK science budget - a sadly ever-present threat these days.

Fed up with the poor and scarce depictions of scientists in literature and films, I founded LabLit.com, a web magazine devoted to fostering realistic portrayals of scientists and the scientific profession in mainstream fiction. Ten years on, even The New York Times is using the term I coined for this woefully rare genre: 'lab lit'.

Putting my money where my mouth is, I've actually published two novels about scientists, Experimental Heart and The Honest Look. These were loosely inspired by my experiences in the strange world of the biology research lab.

I'm also outspoken about the under-representation of women in the higher echelons of academic STEMM, and together with Prof Uta Frith and Prof Philippa Talmud, I co-founded UCL Women, a grassroots networking group.

Finally, I devote a lot of my free time to engagement and science communication, because it's so important for scientists to have a dialogue with the wider public.

And I'm proud that I've just about managed to keep all of these balls in the air with an indefatigable toddler son.

I drink a lot of lattes.

For a few years now I've been collaborating with clinicians and engineers on a new way to treat chronic urinary tract infection (UTI).

Chronic UTI is a serious problem amongst the elderly patients, mostly women, can get infected again and again, or suffer from lower-grade infections that never properly go away and that can flare up repeatedly despite antibiotic treatment. It is truly miserable, and can be life-threatening.

I used to work on cancer in the abstract-along with many thousands of others-but made a conscious decision some years back that I wanted to contribute to an area where my efforts would make more of a practical difference.

UTI is a severely neglected disease; despite it imposing an absolutely enormous economic and healthcare burden, there are only a handful of labs worldwide studying chronic UTI. This is despite the fact that our population is getting older - and given the global antibiotic resistance crisis, the problem is set to get worse.

Very recently we attracted industrial funding to take our novel therapeutic strategy through to clinical trials via the UCL start-up company AtoCap. We have encapsulated antibiotics into innovative, multi-layered microcapsules, which are designed to be targeted into the bladder, to deliver a high, penetrative dose of therapeutic agent.

We are all thrilled that our idea is going to be put to the test and will have a chance to make a difference to patients. So the top of my to-do list is to oversee the biological aspect of the preclinical work, which has only just begun.

The therapy needs to be tested in my lab. This will involve working with the engineers to get the formulation just right, and with my biologists to ensure that the testing is thorough and informative. There is an amazing amount of hard graft ahead, but I'm always energized when working with talented people from other disciplines towards a common goal.

When I was a PhD student in Seattle, I used to work 80-hour weeks in the lab, much of it late at night when no one else was around. I would blast the Offspring's Smash so loud that the glassware rattled. I still play it when I want to get worked up about something important.

As someone interested in scientists in fiction, I spend a lot of time reading lab lit. My favourite book at the moment is Flight Behavior by Barbara Kingsolver. An intelligent but poorly educated woman in rural Tennessee has her stifled life transformed when scientists come to town, attracted by an almost miraculous natural phenomenon in the nearby woods.

What is wonderful about this story is that the reader can experience science and scientists from a totally outside-even ignorant-perspective, as the protagonist is slowly drawn into the world of research as a much-needed escape. At the same time, the book has a lot to say about family, relationships, religion, politics, and the potential of climate change to wreak havoc on the fragile ecosystem.

As for films, it's got to be I, Robot. I have a soft spot for Will Smith (who, by the way, looks pretty sexy as a white-coated scientist in I Am Legend), and director Alex Proyas did a great job integrating an original modern screenplay with aspects from some of Isaac Asimov's classic short stories.

Why did the ancient Egyptians shave their heads?

To make them more pharaoh-dynamic.

Assuming they're allowed to be dead as well as alive, it would be very satisfying to pair up scientists who had not lived to know the significance of their theories with modern-day researchers who owe a great debt to those discoveries.

For example, Gregor Mendel (1822-1884), a solitary monk credited as the father of genetics, did not live to understand the DNA-based nature of heredity, nor receive the accolades; he would probably greatly enjoy a chat with some people on the cutting edge of genetics, such as Andy Fire and Craig Mello, who discovered RNA interference, or key players from the diverse group of scientists currently jockeying for Nobel pole position for the discovery of CRISPR-Cas.

Listen up! Yes, you. All those people telling you you'll never make it? Well, let me just clue you in. They might have an agenda. They might be jealous-they might be clueless. They might be having a bad day, and you happen to be in the firing line. They might have absolutely no idea what you are truly capable of, and have no interest in finding out. Don't listen to them-listen to people who have your best interests at heart and who are on the side of the positive.

I was recently pleasantly surprised myself to have been elected a Visiting Fellow at the University of Oxford's Lady Margaret Hall, for a three-year term. When the full list was published, I was even more surprised to see that I was the only academic on the eleven-person list (which included people like Benedict Cumberbatch).

I am looking forward to getting stuck into this unexpected adventure, making new contacts and widening my horizons. Alan Rusbridger, the Principal of LMH, has said that he wants the fellows to act as a bridge between their own worlds and that of the academic community, with the expectation that the enrichment would flow in both directions.

Chalk Creek, Colorado-an ice-cold stream in the heart of the Rocky Mountains where my family used to camp each summer.

I have spent countless hours there casting my dry fly into pools, rivulets and under mossy banks, coaxing trout onto my line. With the sun on your back and the gurgle of running water in your ears, time stands still.