Data from location-based social networks may be able to predict when a neighbourhood will go through the process of gentrification, by identifying areas with high social diversity and high deprivation. 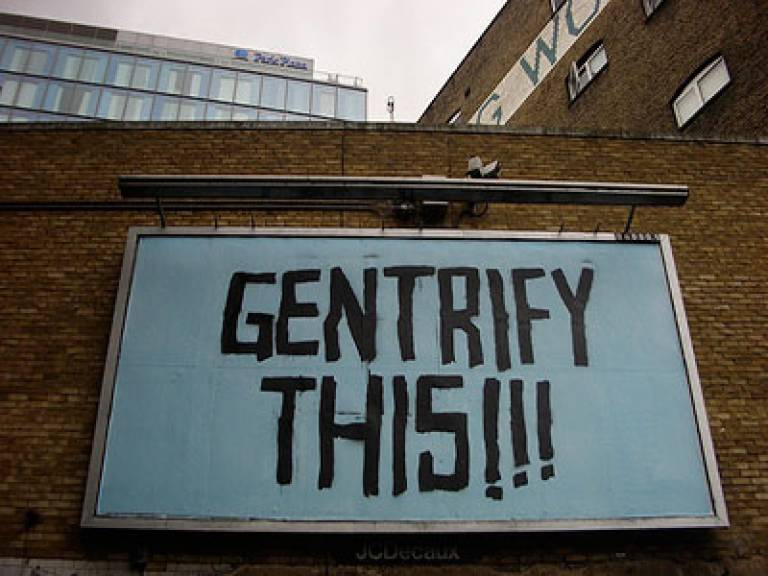 The first network to look at the interconnected nature of people and places in large cities is not only able to quantify the social diversity of a particular place, but can also be used to predict when a neighbourhood will go through the process of gentrification, which is associated with the displacement of residents of a deprived area by an influx of a more affluent population.

The researchers behind the study, led by the University of Cambridge, include Dr Mirco Musolesi (UCL Geography) and colleagues from the University of Birmingham and Queen Mary, University of London. They will present their results today (13 April) at the 25th International World Wide Web Conference in Montréal.

Dr Musolesi commented: "This study shows the power of these new forms of data, which are truly changing the way we understand our cities and our society as a whole. This is an example of how computational models can effectively be applied to understand changes in people's lifestyles and the environment we live in.  I believe that the analysis of large-scale datasets, like this one extracted from online social networks, can really have a remarkable positive impact by providing a cost-effective way of understanding phenomena at a scale and truly in real-time."

The researchers used data from approximately 37,000 users and 42,000 venues in London to build a network of Foursquare places and the parallel Twitter social network of visitors, adding up to more than half a million check-ins over a ten-month period.

From this data, they were able to quantify the 'social diversity' of various neighbourhoods and venues by distinguishing between places that bring together strangers versus those that tend to bring together friends, as well as places that attract diverse individuals as opposed to those which attract regulars.

When these social diversity metrics were correlated with wellbeing indicators for various London neighbourhoods, the researchers discovered that signs of gentrification, such as rising housing prices and lower crime rates, were the strongest in deprived areas with high social diversity. These areas had an influx of more affluent and diverse visitors, represented by social media users, and pointed to an overall improvement of their rank, according to the UK Index of Multiple Deprivation.

The UK Index of Multiple Deprivation (IMD) is a statistical exercise conducted by the Department of Communities and Local Government, which measures the relative prosperity of neighbourhoods across England. The researchers compared IMD data for 2010, the year their social and place network data was gathered, with the IMD data for 2015, the most recent report.

"We're looking at the social roles and properties of places," said the study's lead author Desislava Hristova (University of Cambridge). "We found that the most socially cohesive and homogenous areas tend to be either very wealthy or very poor, but neighbourhoods with both high social diversity and high deprivation are the ones which are currently undergoing processes of gentrification."

Hristova and her co-authors found that of the 32 London boroughs, the borough of Hackney had the highest social diversity, and in 2010, had the second-highest deprivation. By 2015, it had also seen the most improvement on the IMD index, and is now an area undergoing intense gentrification, with house prices rising far above the London average, fast-decreasing crime rate and a highly diverse population.

In addition to Hackney, Tower Hamlets, Greenwich, Hammersmith and Lambeth are also boroughs with high social diversity and high deprivation in 2010, and are now undergoing the process of gentrification, with all of the positive and negative effects that come along with it.

The ability to predict the gentrification of neighbourhoods could help local governments and policy-makers improve urban development plans and alleviate the negative effects of gentrification while benefitting from economic growth.

"We understand that people who diversify their contacts socially and geographically have high social capital, but what about places?" said Hristova. "We all have a general notion of the social diversity of places and the people that visit them, but we've attempted to formalise this - it could even be used as a specialised local search engine."

For instance, while there are a number of ways a tourist can find a highly-recommended restaurant in a new city, the social role that a place plays in a city is normally only known by locals through experience. "Whether a place is touristy or quiet, artsy or mainstream could be integrated into mobile system design to help newcomers or tourists feel like locals," said Hristova.