Provost's View: Women in the workplace (and what men can do to help)

This week saw something of a departure for me. 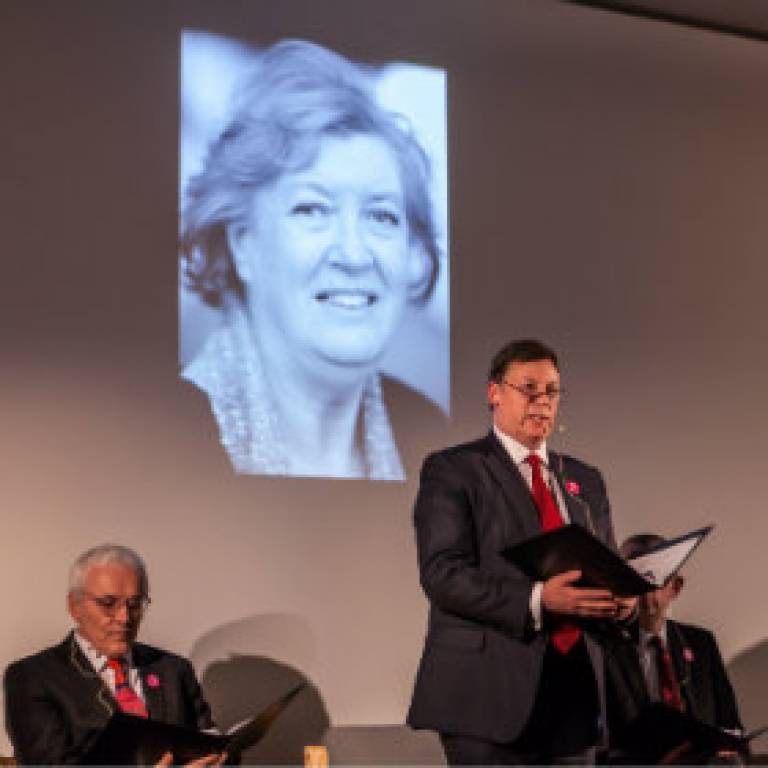 On Monday, it was my great pleasure to take part in SEVEN, a documentary play presented by the UCL Institute for Women's Health and based on the real life stories of seven women's rights activists from Nigeria, Afghanistan, Guatemala, Russia, Pakistan, Northern Ireland and Cambodia.

The reason it marked a departure for me was that I was one of the seven senior men at UCL chosen to stand on stage and voice the stories of these seven courageous women. My fellow performers were Professor Sir John Tooke, Vice-Provost (Health) and Head of UCL School of Life and Medical Sciences; Professor David Lomas, Vice Provost-elect (Health) and Dean of Medical Sciences; Professor Anthony Smith, Vice-Provost (Education & Student Affairs); Professor Alejandro Madrigal, Pro-Provost for the Americas; Professor Peter Brocklehurst, Director of the UCL Institute of Women's Health; and Professor Anthony Costello, Pro-Provost for Africa and the Middle East and Director of the UCL Institute for Global Health.

The purpose of the event was to rethink the status of women in societies and the role that UCL can play - through academic influence and impact - to improve the lives of women internationally. It was also an opportunity for all of us involved in reading the play to immerse ourselves in these tragic but very powerful stories, and to consider what that experience might mean for our roles and responsibilities in promoting gender equality at UCL.

SEVEN is just one part of a whole fortnight of events to mark International Women's Day. Another highlight is UCL Women's inaugural International Women's Day Lecture on 10 March, which I will also be attending. Nobel Laureate Professor Elizabeth Blackburn will be giving the lecture, which will be followed by a reception and a photo exhibition of female staff nominated as part of the SLMS Academic Role Models publication.

There are many extraordinary women working here and this is something we must celebrate. I worry, however, that in some instances that they are successful despite, rather than because of, our working culture.

UCL has certainly made progress in recent years - the proportion of female professors has been increasing year-on-year, with higher proportions of women than men recently being promoted to professor in our academic promotions rounds. But despite this, the proportion of female professors still only stands at 24% (albeit above the Russell Group average of 21%). The very small number of female heads of department is another big challenge, in my mind, and one that we will address.

A frustrating state of affairs

It would be easy to explain this away and assert that there 'aren't enough women in the pool', we recruit and promote on merit or that women don't 'choose' these roles, but the fact that there are fewer women at each stage of the pipeline belies this assertion. It is a frustrating state of affairs - especially as 2015 marks 40 years since the Sex Discrimination Act came into force.

What can we do about it? Or, more specifically, what can I do about it? Gender equality has been one of my strategic priorities since I arrived at UCL. To this end, I became Chair of UCL's 50:50 gender equality group and we are currently overseeing UCL's ambitious application for a university Athena SWAN Silver award.

Nevertheless, we are struggling to enhance our policies, as they are already quite progressive - such as a term's sabbatical leave for maternity returners. It is exciting that male and female partners will finally be eligible to take Shared Parental leave, as has been done for years in many Nordic countries. I am quietly optimistic that this will begin to transform expectations about who takes career breaks and the relative roles of men and women.

Everyone has a part to play

However, the changes that are needed on the ground, as I see them, are cultural, incremental and require everyone to play a part. Collectively, we need to transform restrictive stereotypes and release men and women from the burden of expectation. UCL's culture also must adapt so that excessive hours and overtly adversarial behaviours become the exception rather than the norm - as the focused collaboration of diverse minds is surely the key to our success.

One area in which I am determined to pioneer new initiatives is in part-time working. Currently, there are few opportunities for challenging or high-status part-time work. This means that people who need to work part-time, usually women, can have their careers curtailed because of the quantity of hours that they are able to do, rather than their abilities.

They tend to either stay where they have negotiated reduced hours or take a new job that is below their skill set. The 50:50 group is exploring ways of creating rewarding part-time work, in order to support mid-career women, and reduce any stigma that discourages men from reducing their hours to support their families and partners.

It is time for UCL to modernise its working practices to get away from the outmoded notion of the 'ideal worker' who has a linear, full-time career path without any significant breaks until retirement (and is usually male). As Sheryl Sandberg recently noted, "Careers are a jungle gym, not a ladder."

Of course, not all women have children and, unfortunately, there are still persistent barriers due to stereotyping and bias. Research indicates that there is a greater expectation, from both men and women, that female leaders behave in a way that is more 'communal' and 'nurturing'.

This would seem to be, potentially, a harmless generalisation and an effective style, but positive stereotypes can be as restrictive as negative ones, in that they don't allow people to play to their individual strengths and character. Research in this area also suggests that women who do not conform to stereotypes are treated more harshly than those who do, and this may be more pronounced when ethnicity is also a factor.

There are several women's networks at UCL such as Astrea, for women in Professional Services, and UCL Women for academics and researchers in STEMM, who are doing fantastic work to support gender equality at UCL. However, these endeavours won't work without male allies. In leading the 50:50 group I hope I am contributing, but I ask that all male colleagues play a role in advancing women's careers on equal terms with men's.

This can be done in simple ways. If you are a manager, make sure that you take the time to develop your female colleagues and have open conversations about their career plans. If you witness a sexist remark, take that person to one side and tell them honestly what you think about it.

Be open about your family responsibilities, if you have them. Make sure that there is space for different women's voices to be heard in meetings. These acts may seem small and insignificant, but can collectively make an enormous difference.

Lastly, we need to redefine what success means, so that it's not just about someone's position on the hierarchy, but how fulfilled they are in their jobs and their lives outside work. Only by promoting a wide range of role models, involving women and men from different staff groups, will we be able to show that there are many ways for people to have a rewarding and successful career at UCL on their own terms.