Provost's View: How philanthropy enables our students to succeed

As many of you know, my office is located at the southern end of the Wilkins Building's South Cloisters, which means I have an esteemed neighbour: Jeremy Bentham's auto-icon. 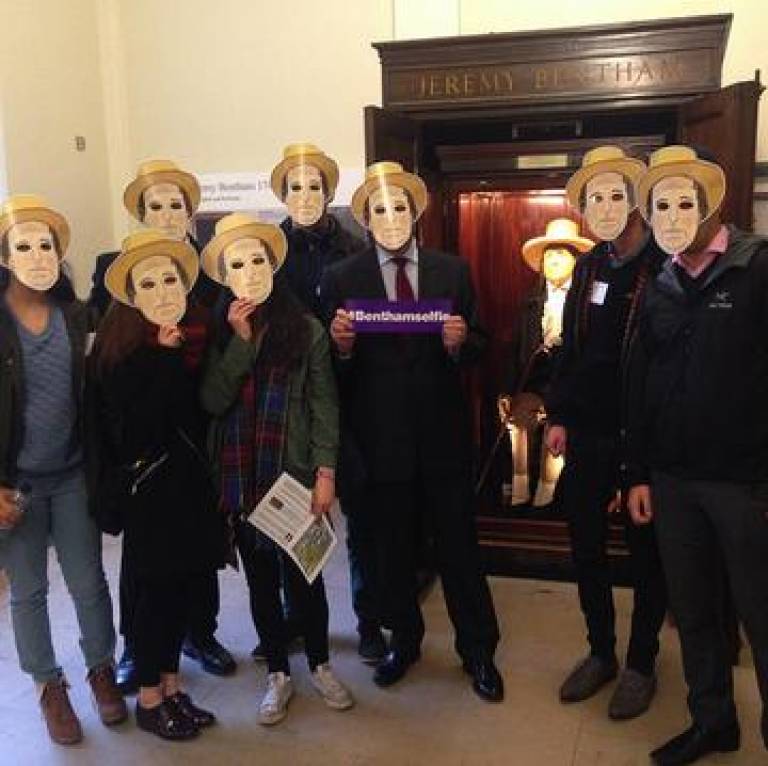 As I see him every day, his face is a familiar one to me. But if there was anyone unsure of what Jeremy looked like, they could have had no greater introduction than to have wandered into the South Cloisters or the Quad on 24 February. There, they would have been met by a total of 153 'Jeremy Benthams' staring back at them.

For those who missed it, the multitude of Benthams* was the focal point of Philanthropy Day - itself the culmination of activities designed to raise awareness of philanthropy at UCL, part of a sector-wide CASE Student Engagement & Philanthropy Month. The response from the UCL community was tremendous.

With Jeremy's face mask as its central theme, Philanthropy Month generated huge interest. Media and social media reached more than 128,000 people (including in the THE), and the Development and Alumni Relations Office distributed more than 5,500 Jeremy masks. These promptly popped up all over the world, from Bloomsbury to Bogota. You can browse the images on the UCL Alumni Flickr channel.

The celebrations proved to be hugely popular with our worldwide alumni and with our staff, and I thank all who played their part. A special mention must go to Peter Cadley (Bloomsbury Theatre) who gamely spent much of February wearing Bentham attire, speaking Bentham's language and posing in countless photos.

As Philanthropy Month aims to highlight to the student community how alumni support has had a positive impact on UCL, it was particularly pleasing that the majority of the 153 Benthams in the Wilkins Building were students.

Philanthropy has transformed the student experience since 1826, by radically redefining who could attend university, which disciplines they could study, in what sorts of facilities, and with what sort of financial support.

However, it is a story that many are unfamiliar with. When we hear the name Birkbeck, most would think of our close Bloomsbury neighbours. Few would associate the name with innovative philanthropy at UCL. But it was George Birkbeck who funded our first-ever purpose-built teaching laboratory, opened in 1846 and fully equipped with space for 24 chemistry students.

It stood at the heart of the campus, at the 'back' of the Wilkins Building. Today, the area is busy with works for the new Wilkins Terrace, close to where the new Student Centre will be built over the next few years.

Of course, it is possible - though, hopefully, ever less likely, thanks to the efforts during Philanthropy Month - that students can go about their daily lives at UCL without knowing which gifts funded which facilities.

More obvious, one imagines, are the scholarships and bursaries that provide students with access and hardship funds. UCL has history here. Our original fundraising campaign - to which Jeremy Bentham contributed - was based on the sale of shares. This conferred several benefits on individual subscribers, including the right to nominate a student to attend at a reduced rate of fees - a sort of partial fees waiver.

Though in our early years this tended to benefit only "the sons of the middling rich", it was not long before donors started to support other, less solvent candidates. One of our first 'access' scholarship recipients dates from 1834, when a group of villagers in Essex clubbed together to raise £300 to send a local 20-year-old to London.

Edwin Lankester came from a poor background and his formal schooling was over by the age of 12. But he went on to be one of England's most influential public health reformers and his son would later take over a philanthropically-endowed Chair in Zoology at UCL.

The common theme between then and now is support for students that enables the very best to succeed, by dismantling the financial barriers that stood in their way. This is an enduring principle at UCL and one that I was delighted to celebrate again earlier this week at our annual Scholarships and Bursaries reception.

Nearly 100 students welcomed more than 80 donors and prospective donors to the North Cloisters. The purpose of the event, a highlight in the UCL calendar, was to thank those who have supported UCL students, raise awareness of how important such funding remains and give donors the opportunity to meet our scholarship and bursary recipients.

Two students spoke about how their scholarships have helped them. It was inspiring to hear from Leon, a second year undergraduate in UCL Archaeology who has had the opportunity to work on excavations in Jersey and Montenegro, but who had previously been working 60- or 70-hour weeks to fund his education, while also supporting his daughter.

Sam, a final year Laws student from Canada, reminded us of the ripple-effect of donor support: she has been able to devote time to extracurricular pro bono activities, working with the local community through the UCL Centre for Access to Justice - itself supported by philanthropic support in recent years.

There are now more students coming to UCL than ever before, from all sorts of backgrounds. The rise in undergraduate tuition fees in 2012/13 has not been the deterrent many people feared, but it is clear that student support continues to make the difference for some.

Moreover, while undergraduate tuition fees are again firmly in electioneering discourse, support for postgraduate study remains an institutional priority. We now have more postgraduates than undergraduates, but financing postgraduate degrees remains a challenge for many.

Next year's home/EU Master's students will be the first group to graduate from higher undergraduate fees, but they will do so a year too early for the new government postgraduate loan scheme in 2016/17.  We are fortunate that HEFCE have offered around £1.8 million in match-funding for 2015/16 and donors can help us ensure that postgraduate study remains a viable proposition for disadvantaged students next year.

Just last week, I was delighted to hear that another PhD scholarship had been funded by one of our physics alumni. I would like to think that over the coming years, we will have so many donors and student recipients that our annual reception rapidly outgrows the North Cloisters.

Of course, by then we'll have a stunning new Student Centre a stone's throw away - the perfect venue, I dare say, for future celebrations of philanthropy.

* Jeremy Bentham coined many new words in his lifetime. Answers on a postcard please for a new collective noun to describe 153 Jeremy face-masks. I'll announce the favourites in a future Provost's View.