More than a third (35%) of 12-year-olds and 28% of 15-year-olds say they have been embarrassed to smile or laugh due to how they felt about their teeth, finds a new UCL-led report commissioned by the Health and Social Care Information Centre. 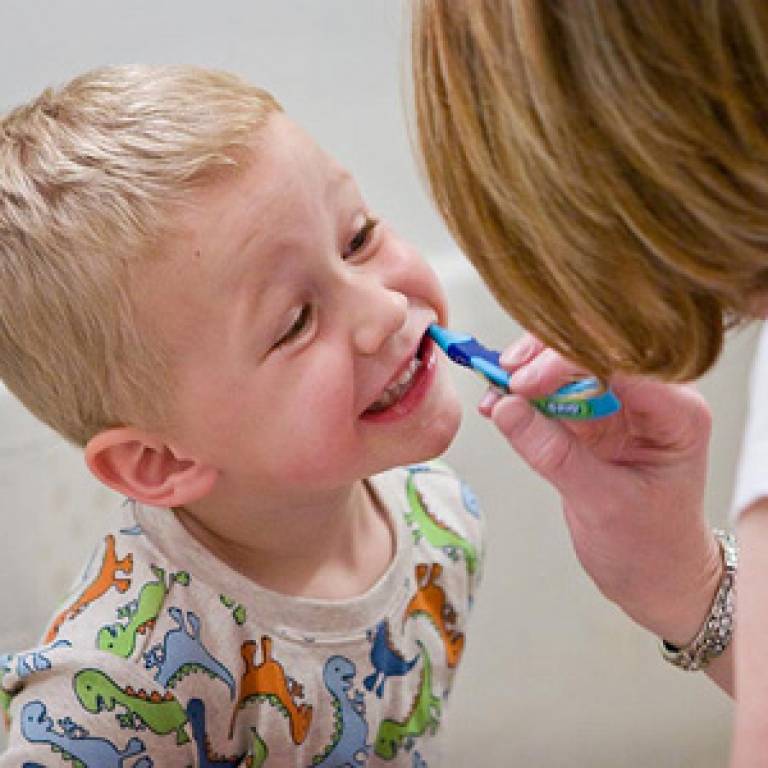 The new report, Attitudes, Behaviours and Children's Dental Health, reveals for the first time how children aged 12 and 15 feel about their dental health. It was written by Dr George Tsakos (UCL Epidemiology & Public Health) in collaboration with colleagues at the Universities of Birmingham, Cardiff and the Office of National Statistics.

58% of children aged 12 and 45% of those aged 15 reported that their daily life had been affected in some way by oral problems in the last three months. This was most commonly experienced as embarrassment when smiling, laughing or showing teeth, followed by difficulty eating, and difficulty cleaning teet.

"Oral conditions can affect children's quality of life in many different ways, not just with physical impacts such as eating but also psychologically and socially," says Dr Tsakos. "We found that problems were much worse in those eligible for free school meals, with 33% of 15 year olds eligible and 22% of those not eligible (for free school meals) saying that their oral health made their everyday life more difficult. This highlights the extent of social inequalities in oral health and quality of life among adolescents and the need for preventive strategies to improve oral health particularly for the more deprived children in the population."

Urgent action is needed to tackle oral health inequalities. It is simply unfair and unjust that children from deprived households suffer so much from dental diseases that are largely preventable. Organisations such as Public Health England have a key role in addressing this problem.

Other key findings from the report include:

"Children from deprived backgrounds are more likely to engage in risky behaviours such as drinking alcohol and sugary drinks, and less likely to brush their teeth or visit the dentist," explains Dr Tsakos. "At the same time, they report that their oral health is having a negative effect on their lives. We need to do more to address these risk factors and promote good oral health in children as failure to do so may have a considerable impact on their lives."

The report forms part of the Children's Dental Health (CDH) Survey 2013 published by the Health and Social Care Information Centre (HSCIC), which provides detailed information on the dental health of children in England, Wales and Northern Ireland. The 2013 survey was produced by a consortium led by the Office for National Statistics with the National Centre for Social Research (NatCen), the Northern Ireland Statistics and Research Agency, UCL, the University of Birmingham, Cardiff University, Kings College London and Newcastle University.

The survey also includes a report led by Professor Richard Watt (UCL Epidemiology & Public Health) on the challenges in children's dental health highlighted by the wide range of clinical and questionnaire data from the survey. The survey found, for example, that 27% of 5 year olds eligible for free school meals reported toothache in the last 6 months, compared with 11% of those not eligible.

"Of particular concern was the strong and consistent relationship between deprivation and severe dental decay in both 5 and 15 year olds," says Professor Watt. "For example, amongst the 15 year olds 26% of those entitled to free school meals had one or more of the severe decay markers, compared to only 12% amongst the other children. Rates of severe decay were also consistently higher in Wales and Northern Ireland compared to England.

"Urgent action is needed to tackle oral health inequalities. It is simply unfair and unjust that children from deprived households suffer so much from dental diseases that are largely preventable. Organisations such as Public Health England have a key role in addressing this problem. Last week the WHO also published guidelines to reduce sugars consumption, a particular problem amongst young people. Public health professionals now need to work together to promote the oral and general health of children."