This week the spotlight is on Rebecca Allen, Student Experience Data Manager, Office of the Vice-Provost (Education and Student Affairs). 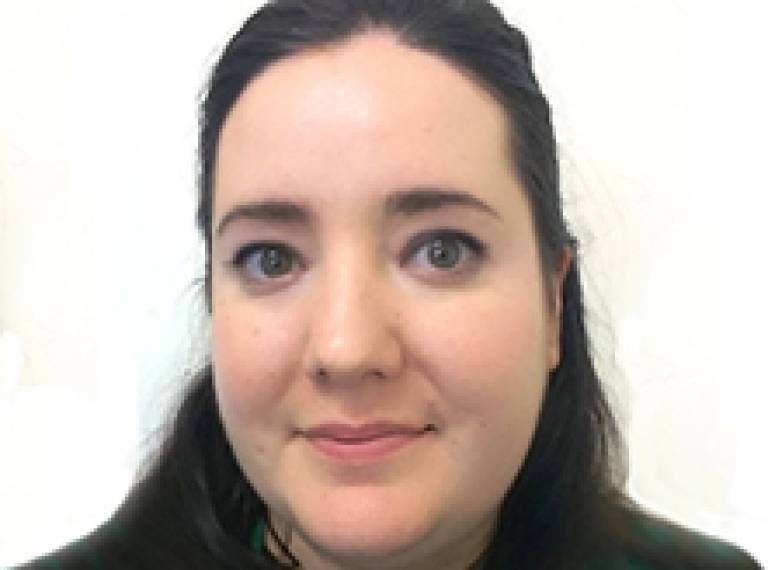 I am UCL's Student Experience Data Manager, which is a brand new role working within the Office of the Vice-Provost (Education and Student Affairs). My job involves promoting the various student surveys that we run, and monitoring and analysing the results at institutional and departmental levels. This information is used to inform policy and strategy development, as well as to give us a picture of student experience as a whole at UCL. We can use this information to really understand what the key issues are and what we can do to improve the student experience at UCL.

I have been at UCL for about six weeks so I'm very new! Prior to this I was a data manager for a train operating company, so UCL is a big change for me. Before that I worked in various roles in railways, including on a franchise bid team bidding to run a railway in the north east. I've also worked in a law firm, an antiques auctioneer's, as a farm labourer and in a music shop.

At my last job on the railway I worked in health and safety management where we ran a public awareness campaign to tackle unsafe behaviour amongst passengers, which was causing a lot of avoidable injuries. I used accident data to target the specific groups, causes and locations where injuries were most prevalent, and over a year successfully reduced major injuries by 50%. We went on to win an award for the campaign at the National Rail Awards last year. The campaign demonstrates how using data effectively can impact change in a very powerful way - which is something we are aiming to do here using the wealth of information provided by the National Student Survey and Student Barometer to positively impact student experience at UCL.

The National Student Survey 2015 has is currently underway so I'm busy promoting that to students and working with the NSS liaison officers to try to achieve our best response rate yet - we are aiming for 75% this year. Departments who achieve the 75% will receive a financial reward to spend on their students, so anything you can do to promote the survey and encourage your students to fill it out will be most welcome. The survey is open to all final year undergraduates and runs until the end of April.

Album - John Mayer's album Where the Light Is, recorded live in LA, is just incredible. Paul Simon's Graceland and the Muse album Absolution are also up there.

Film - I recently saw Wild, the film where Reese Witherspoon walks 1000 miles along the Pacific North East Ridge. It changed my life - I felt like I could achieve anything after watching it. I will always love the Miyazaki film Howl's Moving Castle, which I could watch over and over again.

Novel - Finn Family Moomintroll has a special kind of magic that takes me right back to childhood. If I had to pick just one adult book, it would probably be Wolf Hall.

There are loads of people I admire but wouldn't actually want to have sitting at my dinner table. So I'd have to go with Tina Fey and Amy Poehler (hilarious), Barack and Michelle Obama (clearly awesome company), and a couple of guys I used to work with who once made me laugh so much I was almost sick.

Being happy is a choice. Also, do more exercise now while it's still easy.

I was a very good highland dancer as a teenager, I have five siblings and I can speak seven languages (some of them very badly).

I love Bamburgh castle and beach in Northumberland, especially when it isn't raining.