A new way to process fibre optic signals has been demonstrated by UCL researchers, which could double the distance at which data travels error-free through transoceanic sub-marine cables. 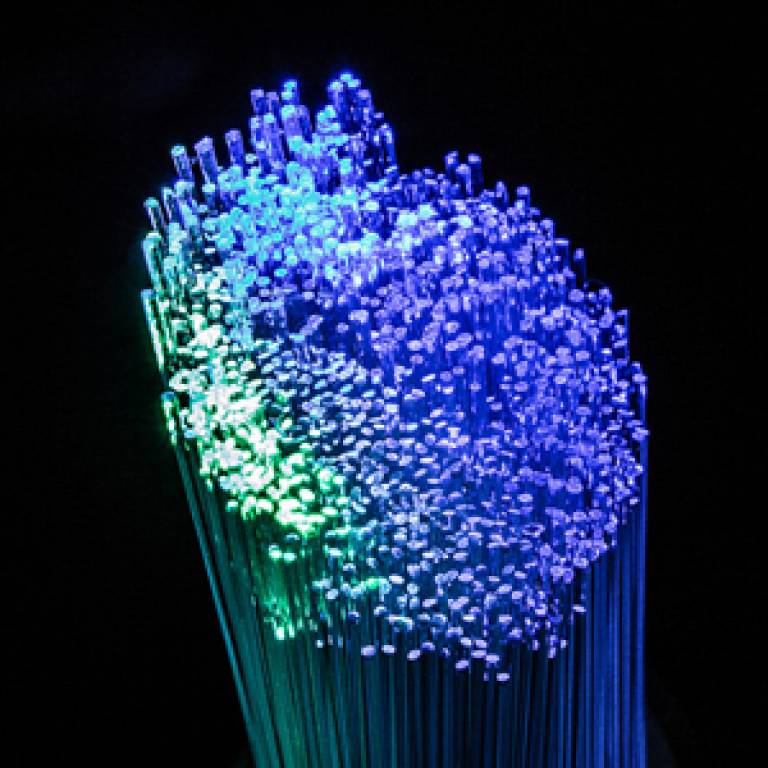 The new method has the potential to reduce the costs of long-distance optical fibre communications as signals wouldn't need to be electronically boosted on their journey, which is important when the cables are buried underground or at the bottom of the ocean.

As the technique can correct the transmitted data if they are corrupted or distorted on the journey, it could also help to increase the useful capacity of fibres. This is done right at the end of the link, at the receiver, without having to introduce new components within the link itself. Increasing capacity in this way is important as optical fibres carry 99% of all data and demand is rising with increased use of the internet, which can't be matched by the fibres' current capacity, and changing the receivers is far cheaper and easier than re-laying cables.

To cope with this increased demand, more information is being sent using the existing fibre infrastructure with different frequencies of light creating the data signals. The large number of light signals being sent can interact with each other and distort, causing the data to be received with errors.

The study, published in Scientific Reports today and sponsored by the EPSRC, reports a new way of improving the transmission distance, by undoing the interactions that occur between different optical channels as they travel side-by-side over an optical cable.

One of the biggest global challenges we face is how to maintain communications with demand for the Internet booming - overcoming the capacity limits of optical fibres cables is a large part of solving that problem.

Study author Dr Robert Maher (UCL Electronic & Electrical Engineering), said: "By eliminating the interactions between the optical channels, we are able to double the distance signals can be transmitted error-free, from 3190km to 5890km, which is the largest increase ever reported for this system architecture. The challenge is to devise a technique to simultaneously capture a group of optical channels, known as a super-channel, with a single receiver. This allows us to undo the distortion by sending the data channels back on a virtual digital journey at the same time."

The researchers used a '16QAM super-channel' made of a set of frequencies which could be coded using amplitude, phase and frequency to create a high-capacity optical signal. The super-channel was then detected using a high-speed super-receiver and new signal processing techniques developed by the team enabled the reception of all the channels together and without error. The researchers will now test their new method on denser super-channels commonly used in digital cable TV (64QAM), cable modems (256QAM) and Ethernet connections (1024QAM).

Study author Professor Polina Bayvel (Electronic & Electrical Engineering) who is Professor of Optical Communications and Networks and Director of UNLOC, said: "We're excited to report such an important finding that will improve fibre optic communications. Our method greatly improves the efficiency of transmission of data - almost doubling the transmission distances that can be achieved, with the potential to make significant savings over current state-of-the art commercial systems. One of the biggest global challenges we face is how to maintain communications with demand for the Internet booming - overcoming the capacity limits of optical fibres cables is a large part of solving that problem."