Concentrating attention on a visual task can render you momentarily 'deaf' to sounds at normal levels, reports a new UCL study funded by the Wellcome Trust. 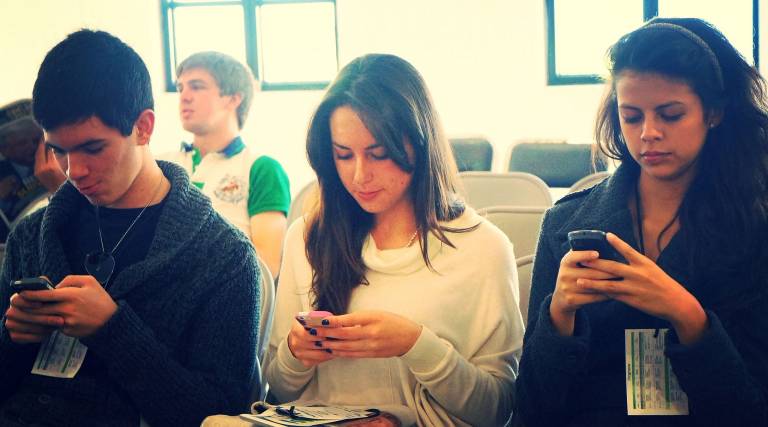 The study, published in the Journal of Neuroscience, suggests that the senses of hearing and vision share a limited neural resource. Brain scans from 13 volunteers found that when they were engaged in a demanding visual task, the brain response to sound was significantly reduced. Examination of people's ability to detect sounds during the visual demanding task also showed a higher rate of failures to detect sounds, even though the sounds were clearly audible and people did detect them when the visual task was easy.

"This was an experimental lab study which is one of the ways that we can establish cause and effect. We found that when volunteers were performing the demanding visual task, they were unable to hear sounds that they would normally hear," explains study co-author Dr Maria Chait (UCL Ear Institute). "The brain scans showed that people were not only ignoring or filtering out the sounds, they were not actually hearing them in the first place."

The phenomenon of 'inattentional deafness', where we fail to notice sounds when concentrating on other things, has been observed by the researchers before. However, this is the first time that they have been able to determine, by measuring brain activity in real-time using MEG (magnetoencephalography), that the effects are driven by brain mechanisms at a very early stage of auditory processing which would be expected to lead to the experience of being 'deaf' to these sounds.

"Inattentional deafness is a common experience in everyday life, and now we know why," says co-author Professor Nilli Lavie (UCL Institute of Cognitive Neuroscience) "For example, if you try to talk to someone who is focusing on a book, game or television programme and don't receive a response, they aren't necessarily ignoring you, they might simply not hear you! This could also explain why you might not hear your train or bus stop being announced if you're concentrating on your phone, book or newspaper.

"This has more serious implications in situations such as the operating theatre, where a surgeon concentrating on their work might not hear the equipment beeping. It also applies to drivers concentrating on complex satnav directions as well as cyclists and motorists who are focusing intently on something such as an advert or even simply an interesting-looking passer-by. Pedestrians engaging with their phone, for example texting while walking, are also prone to inattentional deafness. Loud sounds such as sirens and horns will be loud enough to get through, but quieter sounds like bicycle bells or car engines are likely to go unheard."