What sixth formers think of the UCL Education Strategy

Sixth formers from a school that UCL sponsors took part in a university-run 'hackathon' on Wednesday. 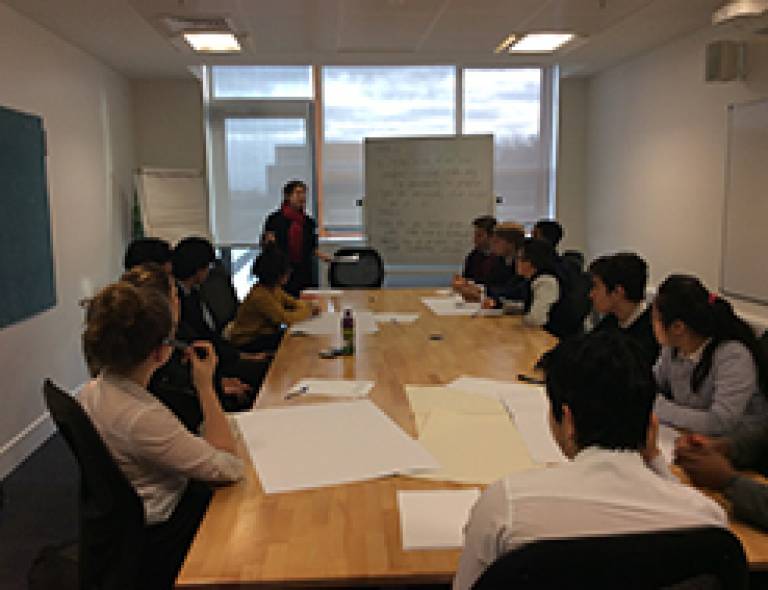 The Office of the Vice-Provost for Education and Student Affairs ran the event at the UCL Academy to find out how future students envisage their university education.

The sixth formers' views will feed into UCL's five-year Education Strategy, which is currently under consultation.

The 13 sixth formers were asked what they would like to be included in an optional online course for students who had accepted a place at UCL, but not yet started their studies.

They replied that lecturers introducing their subjects, detailed maps, in-depth guides to their course and information on extra-curricular activities would be useful.

One group of students said they would find careers information at this early stage invaluable as it would prove useful guidance during the course of their time at UCL.

One of the sixth formers said: "I think a guide to life in London would be helpful to everyone, even if you already live here."

The sixth formers also detailed what they expected from feedback on their work and how this might be different at university. All the students wanted it to be personal to them with one student expressing that "it should not be too harsh, it should be positive".

Some of the students said they wanted assessment criteria to be laid out clearly and to have extra help online after they had received feedback.

Another group suggested that there should also be regular face-to-face feedback sessions in order to keep the feedback personal.

Following the short session, the students said they enjoyed feeding back their views on university life. One said, "I think it's great, and very useful, when universities come in to schools and give us the chance to tell them what we think. It can be quite daunting to find out information about university life  by yourself so it's good to know universities want our opinion too."

Another student commented that, "At university you have to be more independent so it's been useful to know what kinds of things might be different before we arrive."

The comments follow our a previous hackathon hosted at UCL in November where 29 students gave their thoughts on what kinds of things UCL could do to improve their teaching and learning experience. Illustrator Dave Smithson (from UCL Health Creatives) illustrated their ideas. Students were also asked what they thought at two pop-up consultations in the South Cloisters.

The consultation is open until Thursday 7 January and all UCL staff and students are welcome to tell us what they think.

UCL was the first university in the country to become a single sponsor of an academy school.