Changes like this can occur when people vary their route to work during a tube strike, for example. Commuters may be familiar with the location of two underground stations but only realise how one is linked to the other by walking between them. Knowing how the stations are connected can then be used to decide which route to take next time.

The study in rats provides the first evidence that grid cells can form maps for large-scale navigation between distinct areas, adding to previous Nobel-prize winning research showing that grid cells appear to map the local environment, acting as a coordinate system to measure distances between places.

Published today in Current Biology and funded by the Wellcome Trust, Medical Research Council and the Royal Society, the study monitored grid cell firing in the brains of eight rats as they moved between two identical compartments connected with a corridor.

Initially, the grid cells fired in the same pattern in each compartment, creating two identical but separate maps. The similarity in the patterns reflects identical sensory cues in each area. As the rats spent more time exploring over the course of several hours, the patterns created by grid cell firing became different for each compartment as the separate maps merged into a single, continuous map that spanned both areas. The scientists think this new, 'global' map is permanent, allowing the rats to understand the absolute location of the compartments which is useful information when planning future journeys. 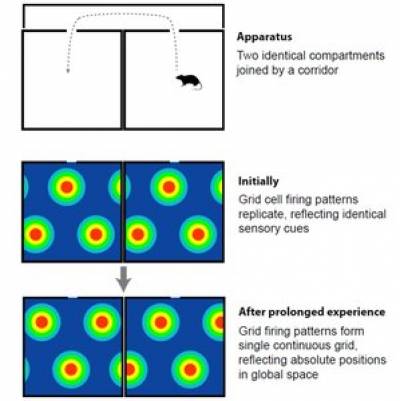 First author of the study, PhD student Francis Carpenter (UCL Cell & Developmental Biology), said: "We've shown what happens in the brain when you realise how two spaces are connected. It wasn't clear before whether grid cells would form a single map for both spaces or keep separate maps. Having these two spaces on a single map means you can plan how to travel between them and suggests that grid cells play a role in large scale navigation, something we'd like to explore further."

To follow how the maps changed, the researchers compared the grid firing patterns to idealised data for local and global mapping. Initially, the patterns fitted the model for local mapping best, before merging to give a closer representation of global mapping as the rats learned how the two compartments were linked and their different locations relative to each other.

Senior author, Wellcome Trust Fellow Dr Caswell Barry (UCL Cell & Developmental Biology), said: "Previous studies looked at how place cells change as we learn how locations are linked. However those results don't really get at the question of how the brain represents space, which is why we wanted to study grid cells as they produce regular repeating patterns. Basically, grid cells tell us how far we've walked and in what direction, this information can be used by place cells to populate our mental maps. If the maps remain separate then it is not possible to relate the places they contain. Our results show that as we move between the areas, grid cells link everything up. The question we're interested in now is how this global map is used to plan journeys and take shortcuts."