This week the spotlight is on Steve Miller, Professor of Science Communication and Planetary Science, Departments of Science and Technology Studies / Physics and Astronomy. 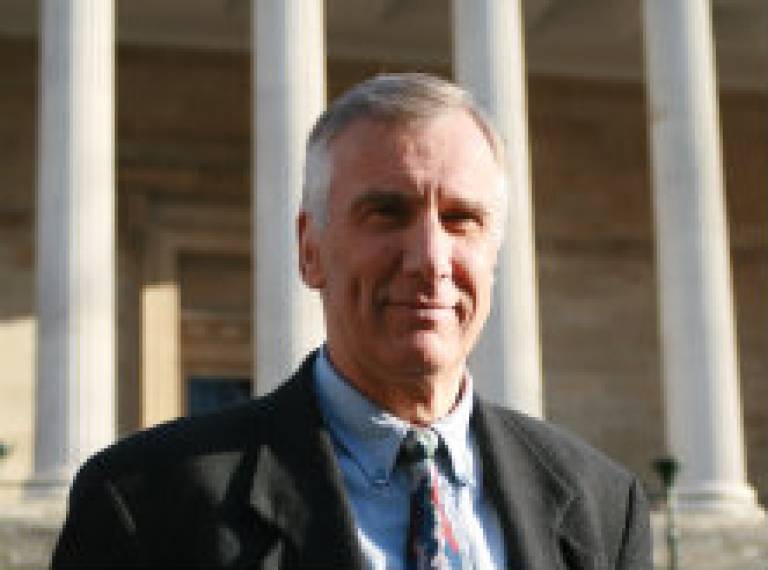 I have a dual professorship - in both Science Communication and Planetary Science. So I'll describe both roles.

Unlike most Professors of Science Communication/Public Understanding of Science/ Public Engagement with Science etc., my role in the Department of Science and Technology Studies involves both teaching and research in science communication, as well as outreach and engagement activities. So, for example, I co-authored (with Jane Gregory) what is still one of the most popular introductions to public understanding of science - Science in Public: communication, culture and credibility  (1998) - based on several years of research into public attitudes towards and involvement with science, and teaching scientists young and old how to communicate with their fellow citizens. And I continue to do both teaching and research today.

My article Public Understanding of Science at the Crossroads (2001) is in the top ten of most cited articles in the peer-reviewed journal Public Understanding of Science. Several of my former students now hold important jobs in science communication, or elsewhere in the media. I have been involved with training some 200+ of Europe's leading scientists in public engagement, too, through the European Science Communication network (ESConet) which I directed. (We have plans to get the band back together again, some time.)

At the same time, I was very involved with science in the mass media - particularly in the 1990s and early 2000s - writing popular science articles and talking on TV and radio (mainly on astronomy). And I wrote my own book The Chemical Cosmos: a guided tour (2012) to "popularise" an area of science that I felt was under-represented in the popular science literature.

This very much tied in with my work in planetary science in the Department of Physics and Astronomy. Here I am mainly a researcher, carrying out observations using the large (infrared) telescopes in Hawaii, and analysing the results to understand - in particular - how the giant planets of the Solar System and those around stars other than our Sun (exoplanets, as they are known) work. I have a question I have been chasing for over 20 years, and to which I still do not have an answer: why are the upper atmospheres of giant planets hundreds of degrees hotter than they should be according to the amount of heat they get from the Sun?

Combining both my STS and P&A roles, I am now chairing a Steering Group for the Royal Astronomical Society's RAS200: Sky and Earth programme. This is a £1 million funding scheme for outreach and engagement with astronomy and geophysics that aims to reach out to new audiences for the Society, such as young people who are not in education, employment or training, or people with special needs and abilities.

I joined UCL in October 1986 as a post-graduate programmer (the lowest research role possible) and I worked my way up to post-doctoral research fellow, lecturer, senior lecturer, reader and finally professor between then and 2003. My roles have involved drilling large holes in the walls of the Physics and Astronomy Department through which we threaded 1"-thick ethernet cables, when the then Head of Department said there was no money to put in networking (really!), to sitting on various committees as a departmental head.

Being a founder member, from 1993 onwards, and then Head of Department in Science and Technology Studies (STS) between 2002 and 2011 was probably the best thing I have ever done. STS is unique in the UK, and the world, I think, in combining history and philosophy of science along with science communication, science policy and sociology of science. When I took over as HoD in 2002, the department was having a more-than-usually tough time: I was the fourth HoD in as many years - not a good omen.

We then faced the threat of the 2003 UCL/Imperial College "merger" - or takeover, as it soon became clear. Our Imperialist partners were the super-arrogant Centre for the History of Science, Technology and Medicine (CHoSTM), who treated UCL STS like a bunch of no-nothings to be got rid of at the earliest possible opportunity: Imperial staff had been briefed by their Rector that the merger would result in 30% redundancies, almost all of which would be UCL staff. Fortunately, a staff rebellion at UCL - we are the Awkward Squad, the Godless of Gower Street, after all - quashed the merger.

In 2004, STS was again threatened - this time from within UCL. The then-Dean of Life Sciences suggested our Department be dismantled, philosophers going to philosophy, historians to the super-rich (and arrogant) Wellcome Trust Centre for the History of Medicine, and the rest of us …? Fortunately, the Dean of our Faculty (Maths and Physical Sciences) realised that STS was one of UCL's going-places departments. So whilst I was HoD we laid the basis to repay that trust and the Department celebrated its 20th Anniversary last year; under our new HoD Professor Joe Cain we have grown to be the largest STS department in the country.

And what of CHoSTM and the Wellcome Trust Centre? I won't use the word "sadly", because I'm not a hypocrite, but they are no more.

One from each area:

In STS I'm now the UCL Principal Investigator for a European project called Responsible Research and Innovation Tools. The UCL team consists of Melanie Smallman and Jack Stilgoe as co-coordinators and Kaatje Lomme as project manager, along with Natacha Faullimel and Olivia Hamlyn as part-time researchers. The project aims to create a toolkit that will help researchers and innovators ensure that their work chimes with the needs and aspirations of their fellow citizens. UCL is the UK Hub for Responsible Research and Innovation (RRI), one of more than 20 across the European Union. We are just a few months into the three-year project now, and have been working to help define just what RRI really means, including the challenging worlds of enterprise and policy. Later in the project, UCL will have the main responsibility for developing the training package for the toolkit that is being developed by the La Caixa Foundation in Barcelona, the overall project leaders.

In P&A, I have been heavily involved in the Europlanet EU-funded projects to coordinate the planetary science community across Europe. This movement is now over 10 years old, and last year UCL hosted its annual European Planetary Science Congress, with a week-long packed programme attended by over 1,000 people from all over Europe (and the world). We even held one of our sessions in Committee Room 11 in the Houses of Parliament, hosted by the Parliamentary and Scientific Committee and the Parliamentary Space Committee. Europlanet is now putting together a new bid for €10 million for funding from the Horizon 2020 programme, making new facilities available for planetary scientists across Europe, with a particular emphasis on including researchers from the East and South-East of the continent, and reaching out to large numbers of European citizens through our outreach and engagement programmes.

Oh yes, and I'm supposed to be going into (semi-) retirement - that's a project in itself.

Film: Walt Disney's "Fantasia" (but there are hundreds more I love)

Novel: Wilkie Collins "The Moonstone" (but there are hundreds more I love)

The enemy were advancing in large numbers, so I put an egg in my boot and beat it. (Courtesy of Spike Milligan)

For six years I ran and wrote for The Labour Herald, a weekly campaigning newspaper edited by Ken Livingstone and Ted Knight. It was very challenging, sometimes scary, and great fun. The paper closed in 1986 when the political climate after end of the miners' strike and Maggie Thatcher's abolition of the Greater London Council and other major (Labour-controlled) local authorities became too difficult for us to raise the funds needed to support it.

My wife's garden in Hilo, Hawai'I, where I grow native hibiscus and other Hawai'ian plants - and the Wailuku River thunders at the back of us. Then Crystal Palace, where I live within ¼ mile of where my father grew up, and where most of my family still live.