Cassini spacecraft received the equivalent of a 200 volt electric shock from the electrostatically charged surface of Saturn's moon, Hyperion, confirming that objects in the outer Solar System can have charged surfaces, according to UCL research. 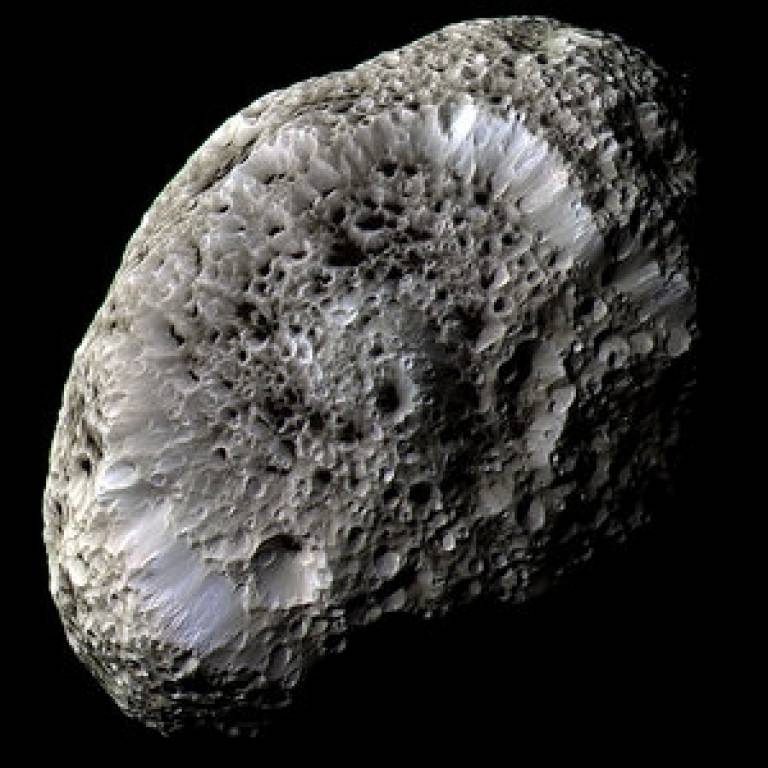 The study, published in Geophysical Research Letters, reports that Cassini was briefly magnetically connected to the surface of Hyperion, allowing it to be caught by a beam of electrons coming from the moon's surface. Static electricity is known to play an important role on Earth's airless, dusty Moon, but evidence of surface charging on other objects in the Solar System has been elusive until now.

The finding supports predictions that many different bodies including asteroids, moons and the surface of comets may be charged, which has wide-ranging implications, say the team. For example, astronauts may be at risk from strong electrostatic discharges when exploring planetary objects without atmospheres, like Earth's Moon.

Hyperion is an irregularly shaped outer moon of Saturn, about 133 km wide, with a bizarre, sponge-like appearance owing to its unusually porous interior. The team believe it becomes charged when exposed to UV light from the Sun and plasma, which contains charged particles, in Saturn's magnetosphere - the invisible, movable bubble generated by the planet's internal magnetic field.

It was rather like Cassini receiving a 200 volt electric shock from Hyperion, even though they were over 2000 km apart at the time. The alignment between the two was just right for us to be able to detect this fairly rare event. If Cassini had been in a different location during the flyby, the electron beam would not have been detected.

The unexpected measurements happened on September 26th 2005, when Cassini conducted its only close targeted flyby of Hyperion. Scientists at the time realised that something odd was happening, but the evidence of Hyperion's charging only became clear when PhD student Tom Nordheim at the UCL Mullard Space Science Laboratory (MSSL) revisited data from past flybys whilst studying the interaction between Saturn's magnetosphere and its many icy moons.

Approximately 6 minutes before the closest approach, the Cassini Plasma Spectrometer (CAPS) on board the spacecraft detected a sharp increase in the number of negatively charged particles. These electrons were in the form of a beam coming from the direction of Hyperion. At the same time, Cassini's Radio and Plasma Wave instrument detected intense plasma wave fluctuations caused by the electron beam.

Data from several Cassini instruments were involved in this work, but the electron spectrometer (ELS), part of the CAPS that detected the electron beam was built at MSSL in a project led by Professor Andrew Coates.

Lead author of the study, Tom Nordheim (UCL MSSL), said: "We know that objects in space, including Earth's Moon, may become electrostatically charged by exposure to solar ultraviolet light and incoming charged particles. This is comparable to what happens when you rub your hair against a balloon, or when a shirt or blouse rubs against a sweater.

"The large difference in potential between the surface and the spacecraft resulted in a flow of electrons being accelerated from Hyperion toward Cassini. It was rather like Cassini receiving a 200 volt electric shock from Hyperion, even though they were over 2000 km apart at the time. The alignment between the two was just right for us to be able to detect this fairly rare event. If Cassini had been in a different location during the flyby, the electron beam would not have been detected."

Co-author, Dr Geraint Jones (UCL MSSL), added: "Surface charging as a fundamental phenomenon affecting planetary objects is currently not well understood and while it has been observed on Earth's Moon, the Saturn system presents us with an opportunity to study this effect in an environment where many parameters are completely different. Our observations show that this is also an important effect at outer planet moons and we need to take this into account when studying how these moons interact with their environment."