This week the spotlight is on Professor Nick Brook, Dean of UCL Mathematical and Physical Sciences. 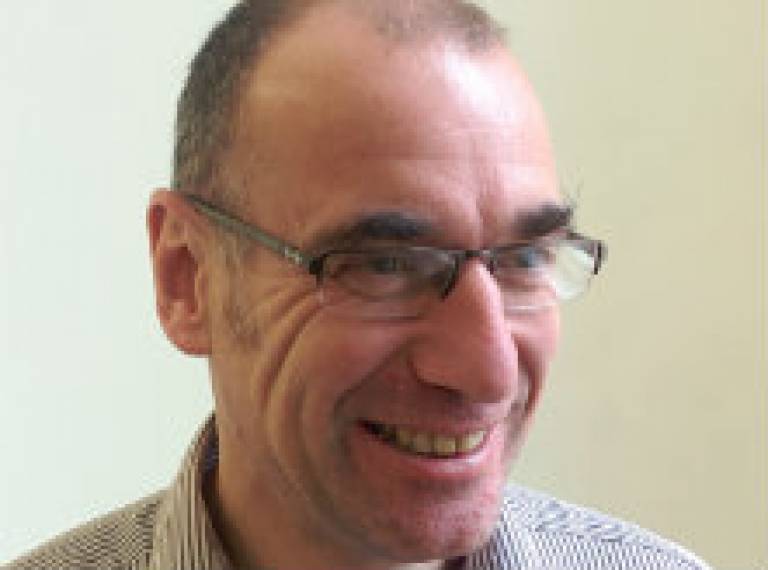 I'm the new Dean of the Faculty of Mathematical and Physical Sciences. As Dean, I am responsible for the strategic leadership and management of the faculty. Those duties include not only ensuring that we continue to build upon UCL's and the faculty's world-class research, but to ensure that research drives our students' educational experience. Our students and academics, and their research and education, should reach out to benefit and enthuse society well beyond the academic realm. Part of my role is to enable that to happen.

What has struck me most in the few weeks I have been at UCL is the sheer breadth and quality of the academic endeavour within the faculty, coupled with an immense enthusiasm. There is a fantastic base upon which to build and to achieve even greater success in both education and research. I firmly believe it is essential that we not only recognise but celebrate success across the board in the faculty from our undergraduates, postgraduates, postdoctoral staff and academics. Nor should we forget the professional service staff that enable all this to happen.

I started on 1 September 2014. Previously I was head of physics at Bristol University. I was at Bristol for 15 years and previously Glasgow University for 8 years. My undergraduate and postgraduate degrees were both at the University of Manchester.

I was the computing project leader of the LHCb experiment at CERN prior to the start-up of the Large Hadron Collider. I was the architect of the computing model that ensured the data from the experiment was distributed worldwide and the raw data was reconstructed into physics objects for use in the physics analysis - and that the analysis could be carried out efficiently in a distributed environment. Thankfully it all worked fine - admittedly not without a few hiccups along the way.

My research is in experimental particle physics and I am involved in the Large Hadron Collider (LHC). As well as being involved in the analysis of the wealth data being produced at CERN, I am active in the development of novel technologies to be used in the upgrade of the experimental facilities. In particular, I am working on making use of Cerenkov light (the optical equivalent of the sonic boom) to identify different types of particle produced in collisions at the LHC. This requires measuring the arrival of the light to within an accuracy of tens of picoseconds. In one picosecond, light only travels 0.3mm.

My musical tastes are all very low brow I'm afraid - guitar based, ranging from jazz (Al DI Meola, Pat Metheny,…) to 70s rock (Uriah Heep, Wishbone Ash, UFO,… - all still touring!) to more modern rock (Black Stone Cherry, The Answer, Alter Bridge) All of these nobody has heard of! Most likely to be popped into the CD player at the moment is the debut album by the Temperance Movement.

I enjoy films from Lindsay Anderson and Hitchcock - both excel in dark humour and great cinematography. If I was to chose a favourite, it would be North-by-Northwest.

I don't know if this is pre-watershed...

If not, how about this:

A neutron walked into a bar and asked, "How much for a drink?" The bartender replied, "For you, no charge."

As long as the guests are amusing and witty, I am more interested in who is doing the cooking. The dangerous (or sad) conclusion from that is that my stomach rules.

I was the first person from my immediate family who went to university. I am the first in three generations not to become a plasterer. Though it is my brother who has the holiday home abroad and a big fancy car.

Auvergne region in France - the French equivalent of the Lake District, only without the lakes! A lot less busy than the Lake District and you can escape from people with some great walking.

City: Rio de Janeiro - one of the few places I've visited that has lived up to the hype. It included climbing up Sugar Loaf - admittedly from the opposite side from the cable car.

Sporting venue: John Smith Stadium, Huddersfield - especially when the town's rugby league club finished league leaders (2013-14 season) for the first time in 81 years. Three generations of the Brook family were there to savour the once in a (three) lifetime achievement!