Most people would rather harm themselves than others for profit

A UCL-led experiment on 80 pairs of adults found that people were willing to sacrifice on average twice as much money to spare a stranger pain than to spare themselves, despite the decision being secret. 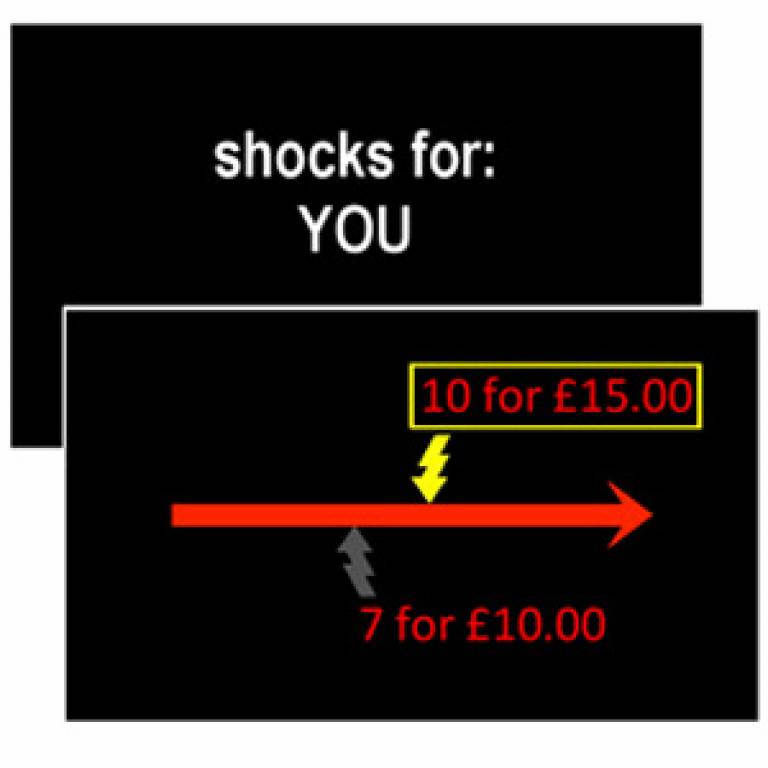 The study, conducted by researchers from UCL and Oxford University and funded by the Wellcome Trust, was the first to experimentally compare how much pain people were willing to anonymously inflict on themselves or strangers in exchange for money. The research is published in Proceedings of the National Academy of Sciences.

Their findings provide a surprisingly optimistic view of human nature, in stark contrast with previous economic studies claiming people fundamentally care about their own interests over those of other people. Understanding how people balance financial gains against the suffering of others could help to explain how policymakers and business leaders make spending decisions, for example on policies to improve the welfare of citizens or employees.

The research also provides insight into clinical disorders characterised by a lack of empathy, such as psychopathy. People with more psychopathic traits were more likely to harm both others and themselves, suggesting antisocial behaviour could result from a general insensitivity to harm. A better understanding of how people evaluate the suffering of others relative to themselves, and how that differs in people with antisocial tendencies, could lead to more effective treatments.

We have shown that when it comes to harm, most people put others before themselves. People would rather profit from their own pain than from someone else's.

In the experiment, 160 participants were randomly assigned to the roles of decider and receiver and anonymously paired up such that each decider did not know who the receiver was and vice-versa. All participants were given mildly painful electric shocks matched to their pain threshold so that the intensity was not intolerable. Deciders were explicitly told that shocks to receivers would be at the receiver's own pain threshold.

Deciders went into a room alone with a computer terminal, and each took part in 150-160 trials. For each trial, they had to choose between different amounts of money for different numbers of shocks, up to a maximum 20 shocks and £20 per trial. For example, they might be offered a choice of 7 shocks for £10 or 10 shocks for £15. Half of the decisions related to shocks for themselves and half to shocks for the receiver, but in all cases the deciders would get the money.

"These results contradict not just classical assumptions of human self-interest, but also more modern views of altruism," says lead author Dr Molly Crockett, who conducted the study at UCL and is now at Oxford University. "Recent theories claim people value others' interests to some extent, but never more than their own. We have shown that when it comes to harm, most people put others before themselves. People would rather profit from their own pain than from someone else's.

"We also timed volunteers' decisions, and found that they hesitated longer when the decision involved harming another person. The most altruistic subjects in our study took the longest to decide for others, suggesting that they may have been making moral calculations. The more selfish subjects decided the fate of others more quickly, which may indicate a lack of thought about moral responsibility. These findings suggest that the speed of people's decisions, as well as decisions themselves, can reveal how moral people are. This logic is reflected in our everyday language - we describe morally praiseworthy people as 'thoughtful' and 'considerate,' whereas more selfish people are described as 'thoughtless' and 'inconsiderate'.

"Although people in this study were highly altruistic in terms of sparing others from pain, they were much more selfish when given the chance to donate money to charity. Exchanging money seems to bring out the worst in people who might otherwise selflessly help others avoid suffering, if given the opportunity."