London and other cities in Britain could be made safer for cyclists finds a study by researchers at UCL and Loughborough University. 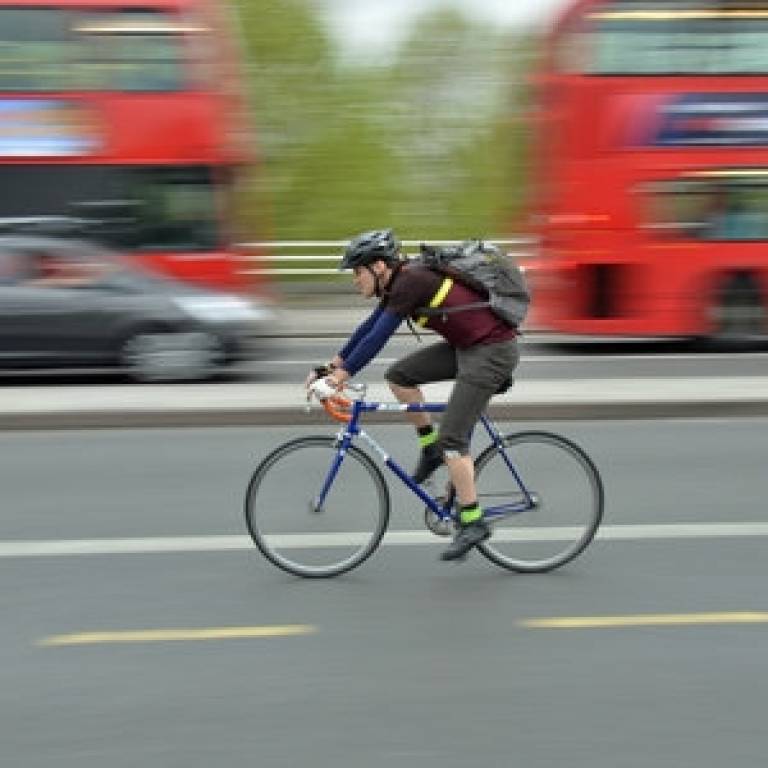 The report commissioned by Transport for London (TfL), makes recommendations which could be implemented using £913 million earmarked by London's Mayor Boris Johnson to improve cycle safety in the capital and increase the number of cyclists four-fold by 2026, say the scientists behind the study.

The main finding is that collisions could be reduced by London emulating the 'best international practise in cycle infrastructure' in cities like Copenhagen and Amsterdam, where up to 40% of journeys are made on bicycles. The team says this would reduce the direct conflict cyclists face with buses, construction vehicles and HGVs and would make London much safer for cyclists.

Other recommendations include reducing HGV movements during commuting hours, educating cyclists not to pass to the left of HGVs and retro-fitting side-guards and mirrors that remove blind spots to HGVs.

The report was carried out to support the development of TfL's updated Cycle Safety Action Plan as casualties among cyclists increased by 59% between 2000 and 2012 with a three-fold increase in the number of cyclists, while total road casualties fell by 51%.

The in-depth study examined 53 of the 79 fatal and life threatening collisions involving cyclists in the time period to understand the factors which led to the accidents. This involved a systems approach of reviewing the built environment, fatality reports from police, CCTV footage, as well as behaviours and occupations of the road users involved.

Our recommendations rely on improved cyclist and driver behaviour, coupled with measures to remove direct cycle and vehicle conflict. We feel the best way to achieve a safer environment and encourage more people to cycle is to invest in best practice cyclist infrastructure.

Almost half of the collisions involved HGVs and 49% involved a vehicle hitting a cyclist while turning left or running into the back of them, with women being most vulnerable. Most of the vehicles involved in collisions when turning left across cyclists were HGVs.

The team found 93% of fatalities occurred on weekdays, with 25% of these happening in the morning rush hour and 73% taking place between November and April.

Dr Nicola Christie, co-author from the UCL Centre for Transport Studies, said: "The way we conducted this investigation was unique in that we looked at all the evidence which would improve cyclist safety not just statistically but qualitatively. We know there are hotspots for collisions including junctions and four-lane roundabouts but we looked at all sites, at the numbers of cyclists using routes and the behaviours of all road users. Our recommendations rely on improved cyclist and driver behaviour, coupled with measures to remove direct cycle and vehicle conflict. We feel the best way to achieve a safer environment and encourage more people to cycle is to invest in best practice cyclist infrastructure."

Professor Pete Thomas, who led the study from the Transport Safety Research Centre, Loughborough University, said: "We have said that we ought to aim for the world's best provision for cyclists - and that is Copenhagen. To achieve that would take decades, these things don't happen overnight. But this, I think, is achievable for London and for other cities in the UK. It's expensive but over the years you would get the money back in terms of fewer accidents, healthier people, and, therefore, less pressure on the NHS. It's also part of a broader issue. What do we want our cities to be like?

"If you increase the percentage of cycle trips from four per cent to say 10 per cent you are taking a lot of vehicles off the road which reduces congestion, improves safety, and is better for the environment. There are benefits for London if they can move further towards being another Copenhagen. It keeps London up there as a world class city."

Ben Plowden, Director of Surface Strategy and Planning at TfL, said: "Our updated Cycle Safety Action Plan demonstrates our commitment to both safer roads for all users and to growing cycling in the capital.

"By using the expertise of British academic institutions, we are able to intelligently focus our efforts in the right places. From a Safer Lorries Scheme to additional training for cyclists and drivers, London is leading the way in cycle safety in the UK."

TfL is currently consulting on proposals for Europe's longest substantially-segregated urban cycle superhighway, which includes innovative designs for major junctions and roads. UCL believes that the proposals for the cycle superhighways represent a positive and much-needed step forward in providing safe routes for cyclists. It fully supports the two proposals which have been set out for consultation.