This week the spotlight is on Dr Jolene Skordis-Worrall, Lecturer in Health &amp; Development Economics and Director of Postgraduate Programmes, UCL Institute for Global Health (IGH). 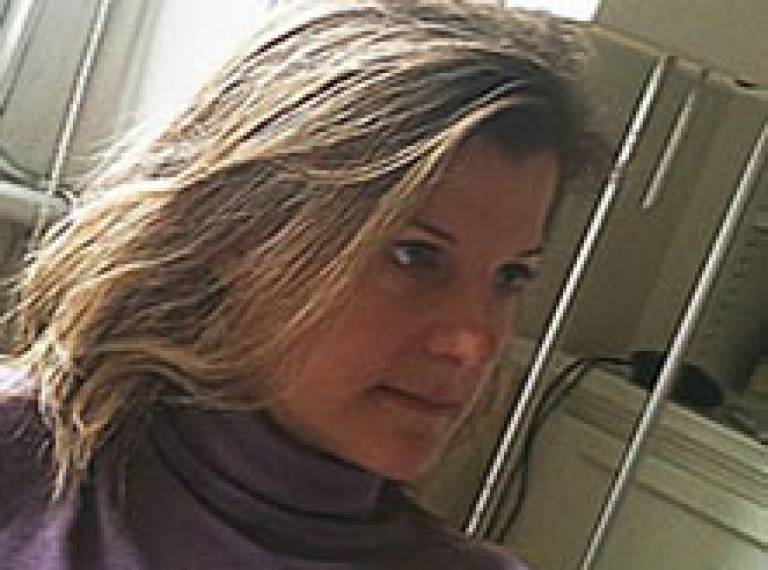 As a lecturer in Health & Development Economics, I am involved in both teaching and research. On the teaching side, I am the Director of Postgraduate Programmes at IGH and I run three modules that introduce students to the exciting world of applied economics. Needless to say, some find it more exciting than others….

On the research side, I work within a number of public health and development trials in low-income countries.

We aim to answer questions on the cost effectiveness of interventions, the extent to which interventions alleviate (or exacerbate) medical poverty and whether interventions support gender empowerment and build the capacity of women to improve their own health and the health of their children.

As this work is highly multidisciplinary, we collaborate widely and have established an academic collective to foster this more closely as well as promote new links and engage users with our work.

I have been at UCL for almost seven years now. Previously, I held posts at the London School of Hygiene and Tropical Medicine (LSHTM) and the University of Cape Town.

I still have an honorary appointment at the LSHTM and work closely with the University of Cape Town.

Within IGH, I have built a team of five economists. I am proud of the formidable talent that we have attracted to the team, the work ethic and energy within the team and the extent to which we are now able to respond to important policy questions and shape the post-2015 agenda in global public health.

Check out our new working paper series on the IGH website.

Our work on early childhood development is at the top of my priority list right now. I am involved with the CARING trial in India, and the SPRING trial in India and Pakistan. These trials are generating the first evidence of their kind for South East Asia.

As an African, my priority is to learn from these trials and then seek to extend the evidence base to the sub-Saharan African context. Arguably, this is where the need is greatest and the evidence most scarce.

I have eclectic media tastes. I couldn't pick an album, but Jack Johnson and Keane probably win out over Lily Allen or Adele.

However, empirical evidence suggests I spend most of my time listening to Classic FM and anything my eight-year-old daughter considers 'cool'.

My favourite movie is an obscure French film called Le Château de Ma Mere. In the way of many French films, there is almost no plot to speak of. It is, quite simply, a perfect slice of childhood summer with extra cherries and lashings of cream.

Novels? These are my passion and my favourite changes with the weather. A top ten list would usually include Palace Walk by Naguib Mahfouz, Independent People by Halldór Laxness, Philip Pullman's His Dark Materials trilogy and anything by Roald Dahl, J. K. Rowling, Jane Austen or the Brontë sisters (except Wuthering Heights!).

"Why did the chicken cross the road?". Such a simple premise, so many possible solutions, none entirely satisfactory.

Nina Conti (so I can thank her for helping me to conquer my fear of ventriloquists), Sarah Millican (to keep Nina company), Nelson Mandela (I am South African after all), Mahatma Ghandi (so that there is another vegetarian at the table for a change), Jon Snow (to let us know if they find the currently missing Malaysian Airlines plane during dinner), George Eliot (for literary flavour), Mamphela Aletta Ramphele (the woman who should be running South Africa and never one to avoid an argument) and my grandmother (the best cook in the world and the only one likely to remember that I have left the food in the oven!).

1) Don't take life quite so seriously. 2) There is more time…. 3) Other people are capable and willing to help!

I am unbeaten at thumb wrestling.