The Japanese Prime Minister, Mr Shinzo Abe, visited UCL on 1 May to celebrate collaboration between the UK and Japan in education and research - and to explore how this can be further developed. 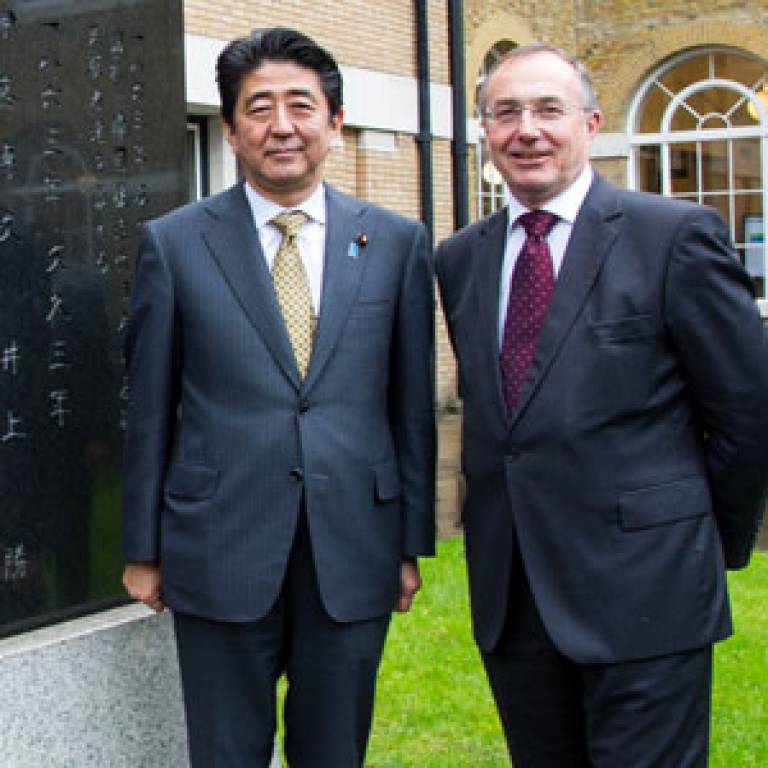 Mr Abe gave the keynote speech at the Japan: UK Conference 'Collaboration in Research and Education' co-hosted by UCL and the Embassy of Japan in the UK. The conference was the first of its kind and was designed to give the leading universities in Japan and the UK the opportunity to showcase their recent efforts in both research and education and discuss future ways to cooperate in these fields.

Following the conference a joint announcement is to be issued signalling participating universities' commitment to encouraging mutual exchange between staff and researchers in both countries, the development of new collaborative research links and the creation of joint international curricula.

Professor Michael Arthur (UCL President & Provost) said: "We are honoured to receive Prime Minister Abe at UCL today and to be the co-host of this important conference. We have very strong ties with Japan - historically and right up to the present day - and recognise the importance of making these stronger, not just at UCL but across the UK higher education sector.

"This meeting of University Presidents is unprecedented and it is clear that there is strong commitment to increase the education and research collaboration between the UK and Japan".

We are honoured to receive Prime Minister Abe at UCL today and to be the co-host of this important conference.

UCL was chosen as the co-host for the conference because of the university's close connection with Japanese history and the strength of its current collaborations with Japanese institutions.

Five young Japanese noblemen known as the 'Choshu Five', members of the Choshu clan in what is now Yamaguchi Prefecture, western Japan, secretly left the country in 1865 to study at UCL.

In addition, in 1865 a group of 14 students from the Satsuma clan including Tomoatsu Godai and Arinori Mori arrived at UCL. The Satsuma group also had significant influence on the modernisation of Japan.

The long lasting relationship between UCL and Japan is symbolised by the Japan Monument that stands in the garden next to the South Cloisters at UCL. The nineteen names of Choshu 5 and the Satsuma 14 students that travelled to UCL are inscribed on the granite monument and accompanied by a Japanese waka (poem).

During his visit, Mr Abe visited the monument and was shown highlights from UCL Art Museum's collection of Japanese prints.