This week the spotlight is on Dr Elettra Carbone, Teaching Fellow in Norwegian, Department of Scandinavian Studies (SELCS). 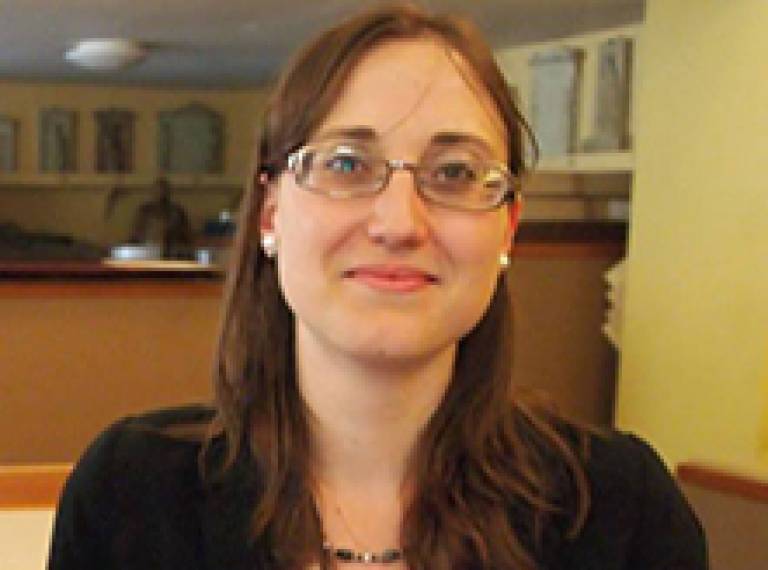 I am a teaching fellow in Norwegian. This involves teaching Norwegian language at all levels as well as sessions of content courses on Norwegian literature and culture.

I worked as postgraduate teaching assistant while completing my PhD, teaching sessions of courses on Scandinavian literature and culture. In 2011, I became Editorial Assistant for Norvik Press Ltd, a small publishing company specialising in Nordic literature, based in the Department of Scandinavian Studies at UCL.

I was also a knowledge exchange associate with UCL Advances for nine months, researching the relationship between small publishing companies in the humanities, such as Norvik Press, and universities. I obtained the position of Teaching Fellow in Norwegian in 2011.

I am especially proud of my work with Norvik Press Ltd. In 2010, I was involved in Norvik's move from the University of East Anglia to the Department of Scandinavian Studies at UCL, together with Dr Claire Thomson (Senior Lecturer in Scandinavian Film, UCL) and the other three company directors (Dr Sarah Death, Professor Helena Forsås-Scott and Professor Janet Garton).

The move wasn't just a physical one, but involved exploring how Norvik Press could benefit from new publishing formats and how it could contribute to UCL research, teaching and public engagement activities (more on this can be found in the comment piece I co-authored with Marita Fraser and Jesper Hansen, "Learning Through Publishing").

This transition phase was supported by UCL Advances and resulted in a number of outputs, including "Book Camp: a hands-on introduction to publishing", a workshop open to all UCL staff, students and members of the wider public interested in learning more on the publishing business and in mastering the basics of a widely used publishing software.

I am also very proud of a project I developed in collaboration with Dr Sara Ayres, "Sculptural Mobilities: Tracing the flows of sculptural artworks between the Nordic Countries and Europe from the early modern period to the present day".

Besides bringing together international experts in sculpture to reflect on the many directions in which sculpture can move in a one-day symposium, we were able to organise a pop-up exhibition thanks to the collaboration of the UCL Art Museum and the UCL Special Collections.

Unique portfolios of drawings representing works of the internationally renowned Danish sculptor Bertel Thorvaldsen (1770-1844) (held by UCL Special Collections and only recently rediscovered by Professor David Bindman) were exhibited at UCL Art Museum in connection with the event.

Finally, I am looking forward to seeing my PhD thesis, Nordic Italies, published as a monograph later this year. The topic combines my cultural background with my academic expertise and explores representations of Italy by Nordic authors in the 19th and early-20th centuries.

My priority project at the moment is a one-day seminar at UCL that celebrates the bicentenary of the Norwegian Constitution (1814-2014). The seminar will be held on 9 April and is supported by the Norwegian Research Council and the Royal Norwegian Embassy in London.

Scholars from the UK and Norway will join in commemorating this anniversary, analysing the impact the Norwegian constitution had and still has on politics and culture in Norway and beyond.

Undergraduate students from the Department of Scandinavian Studies will also be contributing to the seminar, reflecting on what this bicentenary means for them.

The seminar is organised in collaboration with Dr Ruth Hemstad (the National Library in Oslo), my colleague at UCL, Dr Mary Hilson (Senior Lecturer in Scandinavian History), The Norwegian Research Council, the Royal Norwegian Embassy in London and Norvik Press Ltd.

For more information on this event and a full programme, please see here.

I don't really have one favourite album: I like listening to any album by The Beatles, but I also love classical music (I adore Mozart's The Magic Flute).

Most of my favourite jokes are in Italian, Danish and Norwegian and don't really translate that well….

I am going to say Romano Prodi, Italian politician and president of the European Commission, and Kim Bodnia, who plays the main character in the Danish series The Bridge.

There is no point in stressing out about things you cannot change.

As a teenager I was seriously considering a career as an opera singer.

This is a difficult question as I have many favourite places and London is certainly one of them. But Oslo, Copenhagen (in particular the Thorvaldsen Museum) and Hvaler (a Norwegian archipelago) also share first place with London.