This week the spotlight is on Ömar Safwat, who is on work experience in UCL Communications and Marketing. 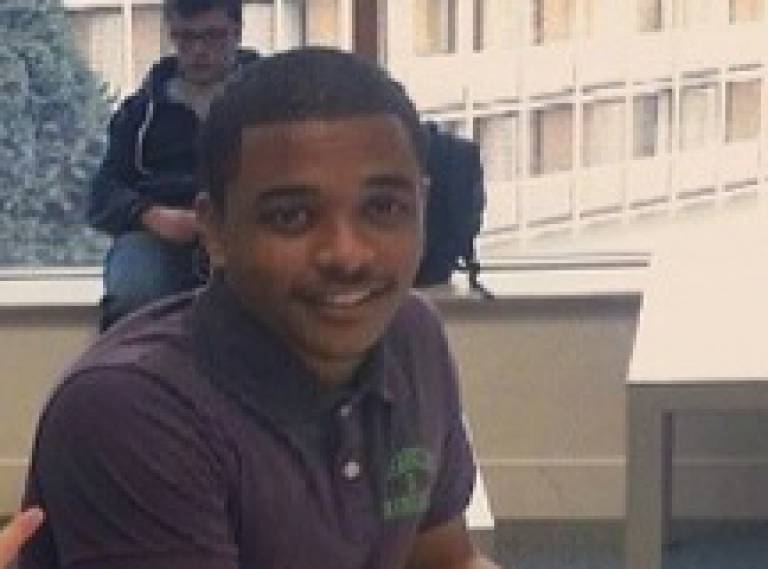 At UCL, I'm doing work experience for two weeks with the Communications and Marketing team, whereas, at the UCL Academy I'm an A Level student studying Psychology, History, Chemistry and Computer Science.

I'm currently studying at the UCL academy and have a week left till I finish my first year.

Being 17 I haven't really done much, but I'd probably say completing the Duke of Edinburgh Bronze and Silver award.

Writing up an extended project for extra UCAS points on the topic 'Is big money ruining our modern day game of football?'. I'm focusing on the impact huge wages and billionaire owners have on the Premier League, for example, people like Vincent Tan, Sheikh Mansour and wages of players like Wayne Rooney.

FILM- I love watching movies, so this is like asking a mother who's her favourite child. I suppose I have to go for Warrior or Blood Diamond

NOVEL - A Long Way Down by Nick Hornby.

What's the difference between a tea bag and the English football team?

A tea bag stays in the cup longer.

Play less football and read more. Having said that, if I had the chance to go back, I would probably do the same thing again.

Being a massive Arsenal fan, it hurts me to say that when I was younger (around 10 years old) I used to have a Manchester United jersey with my favourite player, Ronaldo, on the back of it. Technically I was a Man Utd supporter - because my dad supported them. Then, when I developed some brains at around 12 years old I saw the light and started to support Arsenal.