The partners of women who miscarry often feel invisible, ignored and sidelined during and after miscarriage - and unable to talk about their own feelings of loss and pain - according to new findings from UCL and the Miscarriage Association. 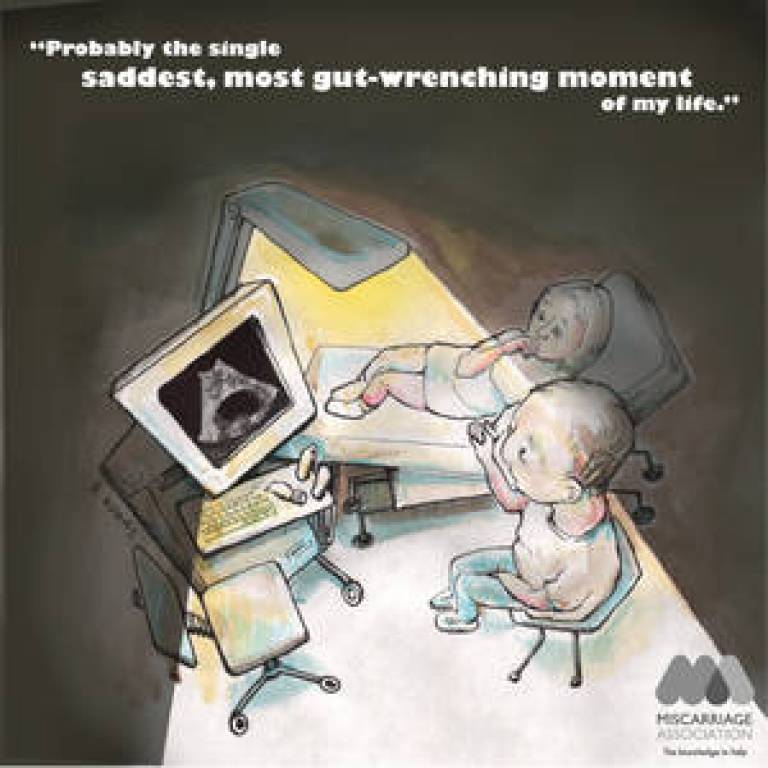 This represents a very large group of people who may require additional help and support, as more than 1 in 5 pregnancies end in miscarriage and a further 2% are ectopic - when a fertilised egg implants itself outside the womb.

The Miscarriage Association is today launching a public awareness campaign, 'Partners Too', to highlight the issue and direct those affected to sources of help and information.

UCL researchers carried out in-depth interviews with 160 partners, who reacted to the miscarriage(s) with emotions such as sadness (85%), grief (63%) and shock (58%).

58% said they struggled to concentrate, 47% reported sleep problems, and 48% said it affected their work. However, 46% of partners didn't share all of how they were feeling with their wife or girlfriend for fear of saying the wrong thing or causing her further distress. 22% didn't talk about any feelings of loss and pain with their partner.

Ruth Bender Atik, National Director of the Miscarriage Association, said: "These findings show that partners often feel invisible during and after miscarriage or ectopic pregnancy. Many keep their real feelings hidden from their wife or girlfriend for fear of saying the wrong thing or causing more distress. Friends and family often ask how the woman who has miscarried is coping, but never think to ask her partner.

"All too often the voices of partners go unheard, and their needs go unmet. We want this campaign to highlight their stories, showing partners that they are not alone in their feelings and telling them where they can find support. We want them to be considered rather than sidelined during and after pregnancy loss."

In the interviews, male partners frequently referred to the expectation that they would be strong for their partners. One respondent said: "It was an experience that we went through together, and I believe that she is the only other person who understands what I feel. However, there is certainly a pressure (either perceived or real) that as a male it is important to be strong and supportive for the other person, which can be hard."

While the majority of the interview respondents who used healthcare services as part of the miscarriage were positive about the help and care they received, there were still problems identified for some partners - particularly around information and support post miscarriage.

While the emotional impact on women who experience pregnancy loss is well-researched, much less is known about partners. We set out to talk to as many as possible to find out both their experiences of pregnancy loss and what they needed to cope during and after miscarriage.

22% partners felt excluded by healthcare staff, 38% were not offered additional information about what was going on, 63% said they were not told of any support groups or services for people who had experienced miscarriage and 13% were distressed by hospitals continuing to send letters about antenatal care after the miscarriage.

Dr Petra Boynton (UCL Medical School), who undertook the research, said: "While the emotional impact on women who experience pregnancy loss is well-researched, much less is known about partners. We set out to talk to as many as possible to find out both their experiences of pregnancy loss and what they needed to cope during and after miscarriage.

"We discovered, contrary to the limited existing research, that partners DO want to talk about miscarriage. While some described having to fill a role of being 'strong' for the woman who miscarried, most really want to talk about their experiences, but struggle to find a way to do this.

"The miscarriage often affected their friendships, work, and physical and mental wellbeing. Although they wanted to have someone to talk to or care for them they said they did not feel able to ask for help from friends, family or their employers and those people didn't seem aware partners might be upset or in need of support."

The main things partners said would help them included:

The experiences detailed by partners as part of the research have been turned into materials to support the Partners Too campaign. These include films of their stories read by actors, cartoons and information leaflets.

This research was funded by a Beacon Bursary via the UCL Public Engagement Unit.

Videos of actors reading partner stories can be viewed below: