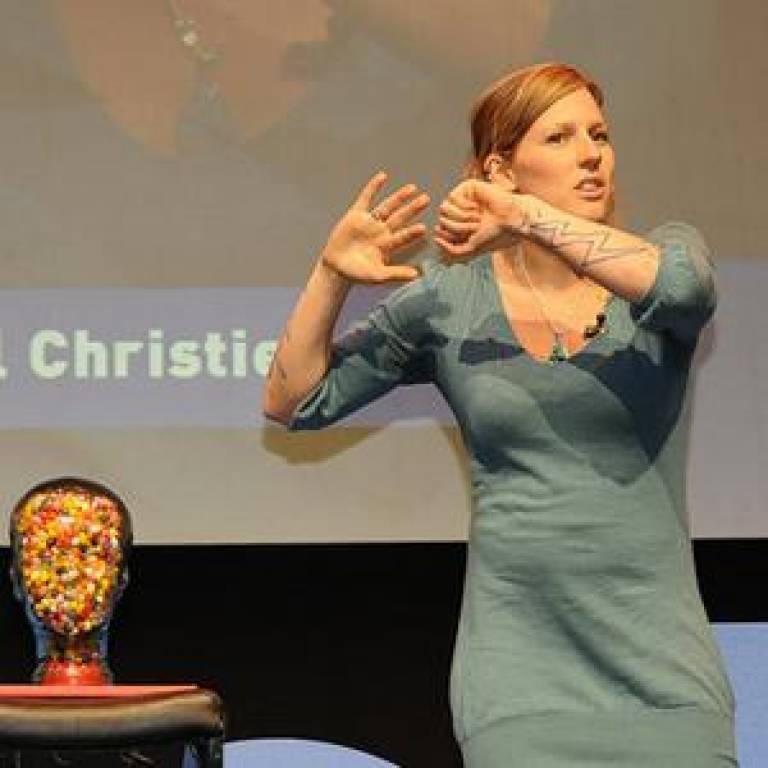 Described by the judges as a "great example of the higher education sector giving its time and talent to benefit the students of the future," Isabel's project aims to encourage students to pursue STEM (science, technology, engineering and maths) subjects at university.

As part of "Virtually University", a videoconferencing outreach set up by the Sutton Trust to inspire higher education candidates, Isabel speaks to school children in schools across the country, describing her unique academic path from favouring English literature at school to undertaking a PhD in neuroscience.

Becoming a Neuroscientist also covers her research at UCL which involves the imaging of brain activity with MRI scanners and the pioneering use of optogenetic technology, a process whereby brain cells are engineered to be light sensitive.

The talk's underlying messages - that scientific careers are accessible to students of all backgrounds and that far more young people ought to study science at university - are brought home by an innovative use of live, interactive presentational technology enabled by Desmond Walker from the UCL Learning and Teaching Spaces team.

On the digital presentation, Isabel said: "It is fantastic because I don't have to leave the campus but am nonetheless able to talk to five different classrooms across the country - which is great because I'm very busy with experiments."

It is fantastic because I don't have to leave the campus but am nonetheless able to talk to five different classrooms across the country - which is great because I'm very busy with experiments.

Isabel has previously been a finalist in the science communication competition Famelab, but engaging with teenagers across the country has been good fun for Isabel, who is impressed by their curiosity and intelligence: "I was struck by some of the scientific questions they asked, such as, "Could we use optogenetics to cure diabetes?"

Much of the popular reception to Isabel's talk lies in her emphasis that despite studying for a PhD she "remains rubbish at maths". Many students incorrectly believe a high level of mathematics is a prerequisite for studying science and so one of her intentions is "to help young people see that they could be excellent scientists once they get beyond the books".

Isabel suggests that studying STEM subjects will allow students to "push the boundaries of human knowledge" which is a great honour. She said: "The value of science can be initially hard to quantify but once we unlock some secrets of the brain I hope we can treat medical problems more effectively". The prize, awarded by the Janet Videoconferencing Service, was presented at a ceremony on Friday 24th January by Labour Peer Lord Jim Knight.