Two UCL professors led a key part of the new analysis of 'Skeleton 1'; which was discovered in a Leicester car park in 2012 on the site of the Grey Friars friary, the last known resting place of King Richard III. 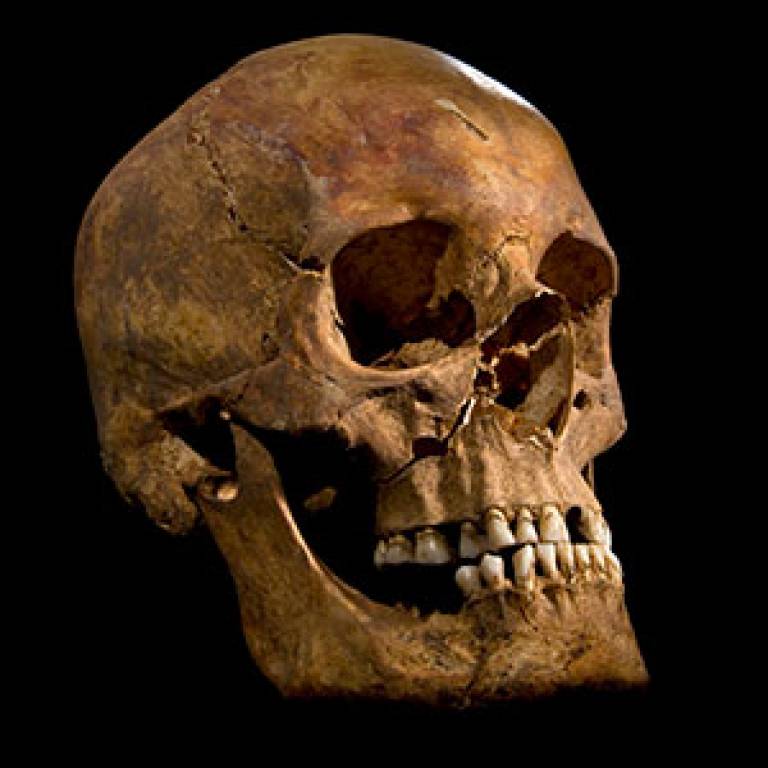 They used probability calculations to combine several different lines of evidence, producing an overall weight-of-evidence for the skeleton being that of King Richard III. Their work forms part of a research study led by Dr Turi King at the University of Leicester and published in Nature Communications.

Professors Mark Thomas and David Balding (UCL Genetics, Evolution & Environment) worked with Dr Turi King to combine the strength of the non-genetic evidence (radiocarbon data, estimated age at death, sex, presence of scoliosis, presence of wounds suffered around the time of death) together with the genetic evidence (the maternally-inherited mtDNA and the paternal Y chromosome) to perform a statistical analysis on the identity of the skeleton.

Contrary to what many may have expected, the genetic evidence alone is not conclusive, partly because only the mtDNA and Y chromosome are suitable for comparing distantly related individuals. In fact, the Y chromosome, did not match presumed male-line relatives of the king, and so counted against Hypothesis 1. However, this non-match could be explained by one or more false-paternity events (where the biological father is not the father recorded in family history) over 19 generations; such events are not uncommon so the male-line data only weakly favoured Hypothesis 2. The mtDNA evidence was found to support Hypothesis 1, but overall the genetic evidence was not enough to confidently identify Skeleton 1 as Richard III.

Analysing all the available evidence in a probabilistic framework, we conclude that the evidence for Skeleton 1 being the remains of Richard III is overwhelming. Hopefully, this research should persuade any remaining doubters.

However, when combined with the non-genetic evidence, even after making assumptions intended count against Hypothesis 1, the authors obtained an overall likelihood ratio of 6.7 million. Even a sceptical translation of this likelihood ratio corresponds to a 99.9994% probability that 'Skeleton 1' is the remains of King Richard III, which the scientists believe puts the matter beyond reasonable doubt.

Professor Thomas said: "When assessing the different lines of evidence we encountered some uncertainties, such as the rate of false-paternity and the rate at which DNA mutates. So in every case we made sure that we choose the most conservative value, by which I mean the value that most favours the remains not being those of Richard III. Even so, analysing all the available evidence in a probabilistic framework, we conclude that the evidence for Skeleton 1 being the remains of Richard III is overwhelming. Hopefully, this research should persuade any remaining doubters."

Professor Balding added: "We are excited to be using mathematical reasoning to play a part in resolving this intriguing bit of history. We hope thereby to promote the use of quantitative reasoning to help resolve other thorny problems involving complex and possibly conflicting lines of evidence. Such probabilistic methods have been used in connection with DNA evidence in courts, but could have much wider applicability if we could convince more people to put aside their fear of numbers and appreciate the power and flexibility of probabilistic (sometimes called Bayesian) reasoning."