Scientists at UCL and the Max Planck Institute for Biology of Ageing in Cologne have discovered how a specific genetic mutation may damage nerve cells in frontotemporal dementia and motor neurone disease. 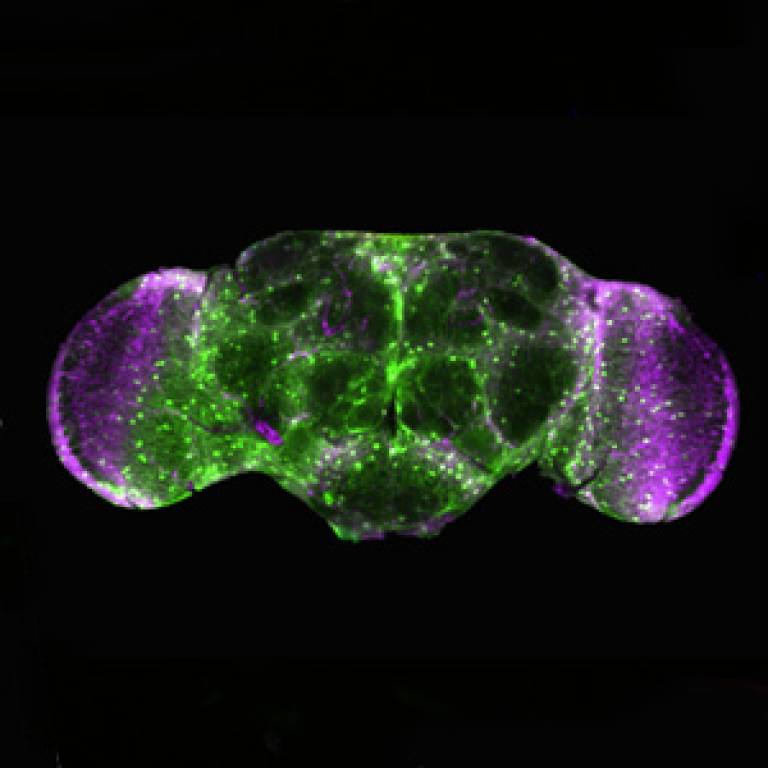 The research, which suggests a potential new target for treating the two brain diseases, was funded by Alzheimer's Research UK, the Motor Neurone Disease Association, the UK Medical Research Council (MRC) and the Wellcome Trust. The paper is published on Thursday 7 August in the journal Science.

The faulty gene contains a short section of genetic code that is repeated thousands of times. This repeated code results in extra molecules called RNA, as well as repeated fragments of protein, and the challenge has been to uncover whether the RNA or the protein - or both - may be harmful to nerve cells.

The research team first worked to 'clone' sections of DNA in a way that produced only RNA, only protein fragments, or RNA and protein together. They then used fruit flies to study the effects of both the RNA and protein. They found that although RNA on its own did not result in any damage to nerve cells, artificial DNA that produced RNA and protein, or only protein, caused striking damage to nerve cells and shortened the lifespan of the flies. The results suggest that toxic protein fragments are the main culprit in causing brain cell death in both diseases.

We believe these results mark an important advance in our understanding of these neurodegenerative diseases, and we are excited to follow up these findings.

Further experiments showed that the toxic effects could be traced to two particular types of protein fragment - those containing high amounts of an amino acid called arginine.

Dr Adrian Isaacs of UCL's Institute of Neurology, senior author of the research, said: "These results suggest a key role for these toxic proteins in FTD and motor neurone disease, and the next step will be to understand whether drugs could be designed to target these proteins and stop the death of nerve cells. We believe these results mark an important advance in our understanding of these neurodegenerative diseases, and we are excited to follow up these findings.

"Our findings were also surprising because our earlier results showed that people with FTD have a build-up of RNA in certain brain regions, and one future avenue for research will be to determine what role this RNA build-up may play in the disease."

Dr Simon Ridley, Head of Research at Alzheimer's Research UK, said: "The discovery of the faulty C9orf72 gene was an important step forward for research into FTD and motor neurone disease, and it's encouraging to see our scientists begin to uncover some of the gene's different biological effects. By understanding how this faulty gene causes disease, we may also begin to understand how to fight these diseases. Further research to understand why this gene can cause two different diseases will also be important. We're delighted to have helped fund this important but early-stage study, and it's crucial that investment in research continues if results like these are to be translated into much-needed new treatments."

Dr Brian Dickie, Director of Research Development at the Motor Neurone Disease Association, said: "Since the discovery of C9orf72 in 2011, researchers have been continually trying to understand how this gene causes both motor neurone disease and FTD. This detailed and elegant research has given us an important insight into how C9orf72 causes disease, which will guide the MND and FTD research communities in their efforts to develop new approaches to treatment."