The fossilised remains of a reptile closely related to lizards are the oldest yet to be discovered. 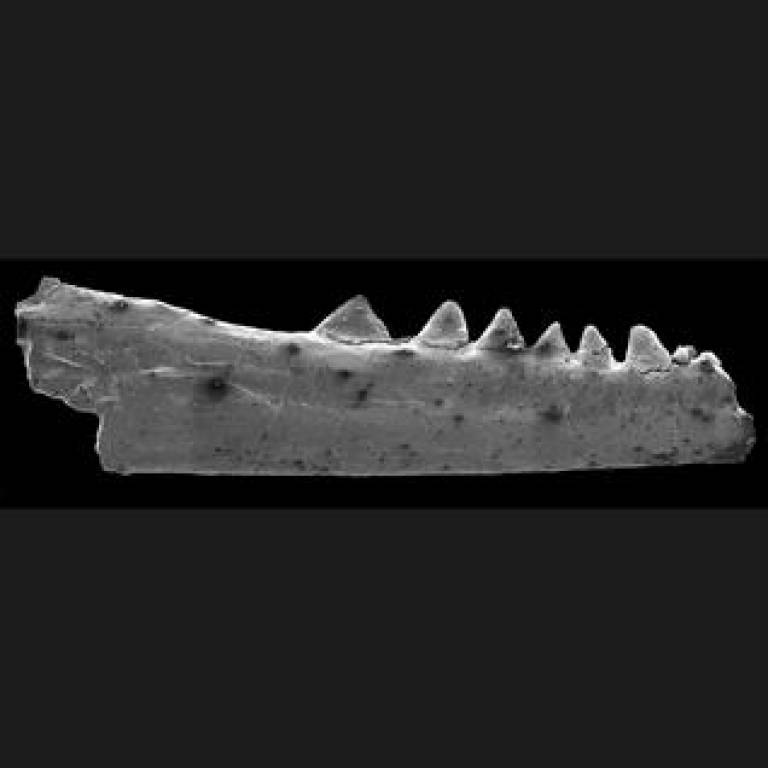 Two new fossil jaws discovered in Vellberg, Germany provide the first direct evidence that the ancestors of lizards, snakes and tuatara (known collectively as lepidosaurs), were alive during the Middle Triassic period - approximately 240 million years ago.

The new fossil finds predate all other lepidosaur records by 12 million years. The findings are published in BMC Evolutionary Biology.

The international team of scientists who dated the fossil jaws have provided evidence that lepidosaurs first appeared after the end-Permian mass extinction event, a period when fauna began to recover and thrive in the more humid climate.

Lead author Dr Marc Jones, who conducted the research at UCL, explained: "The Middle Triassic represents a time when the world has recovered from the Permian mass extinction but is not yet dominated by dinosaurs. This is also when familiar groups, such as frogs and lizards, may have first appeared."

The small teeth and lightly built jaws suggest that the extinct animal preyed on small insects. The new fossils are most closely related to the tuatara, a lizard-like reptile.

Tuatara can be found on 35 islands lying off the coast of New Zealand and were recently reintroduced to the mainland. However, they are the sole survivors of a group that was once as globally widespread as lizards are today. Tuatara feed on beetles, spiders, crickets and small lizards, also enjoying the occasional sea bird.

The Middle Triassic represents a time when the world has recovered from the Permian mass extinction but is not yet dominated by dinosaurs. This is also when familiar groups, such as frogs and lizards, may have first appeared.

Today, there are more than 9,000 species of lizards, snakes and tuatara. Knowing when the common ancestor of this grouping first appeared is crucial for understanding the ecological context in which it first evolved as well as its subsequent diversification.

To establish the age of the fossil remains, biologists use a dating technique known as a "molecular clock". This method compares the amount of genetic divergence between living animals, caused by changes in their DNA sequences that have accumulated since they split from a common ancestor.

These mutations occur fairly regularly, ticking along at a clock-like rate. However, for the clock to convert genetic differences into geological time, it has to be calibrated using one or more fossils of known relationship and time.

Molecular clocks have been used by biologists to answer questions as important as when the first modern humans emerged, and when humans and chimpanzees shared a common ancestor.

The new fossil jaws can improve molecular dating estimates of when reptiles began to diversify into snakes, lizard and tuatara, and when the first modern lizards inhabited the earth. Previous estimates have varied over a range of 64 million years and the team are keen to help narrow this down.

"Some previous estimates based on molecular data suggested that lizards first evolved 290 million years ago," said second author Cajsa Lisa Anderson, University of Gothenburg. "To a palaeontologist, this seems way too old and our revised molecular analysis agrees with the fossils."

Revised molecular dating in light of this new fossil find now suggests lizards began to diversify into most of the modern groups we recognise today, such as geckos and skinks, less than 150 million years ago in the Cretaceous period, following continental fragmentation.

The specimens were collected and initially identified by Professor Rainer Schoch from the Staatliches Museum für Naturkunde in Stuttgart, where the specimens are now registered.

Scientists anticipate that the Vellberg site will yield yet more fossil discoveries in the future, broadening our knowledge of the vertebrate fossil record.

Co-author Professor Susan Evans from the UCL Department of Cell and Developmental Biology said: "The fossil record of small animals such as lizards and frogs is very patchy. Hopefully, this new fossil site in Germany will eventually give us a broader understanding of what was going on at this time."

Image: one of the Vellberg jaws. Credit: Marc Jones