This week the spotlight is on Lizzy Baddeley, Events Coordinator for UCL's Public Engagement Unit. 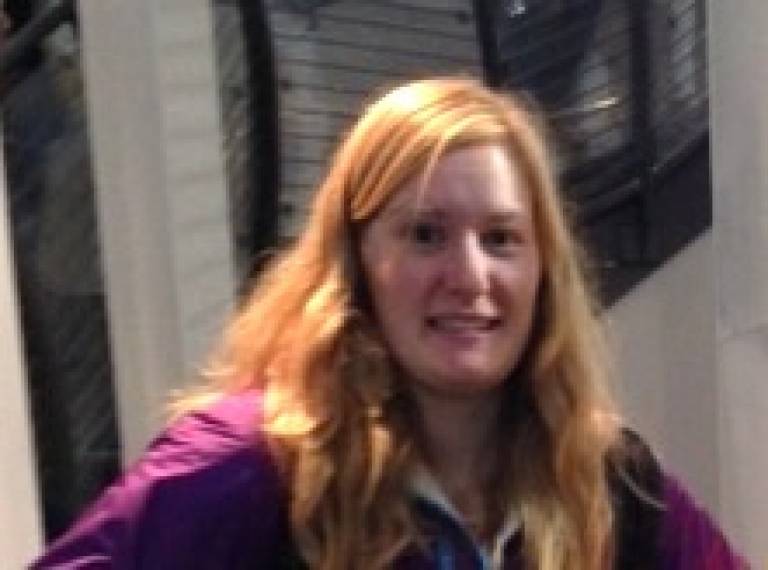 I am the Events Coordinator for the Public Engagement Unit, which means I run public events to help get UCL researchers interested in engaging with public groups. I run Bright Club and take events to local festivals such as the Bloomsbury Festival.

I've been here since January and, previously, I had two jobs. I was working at the Houses of Parliament giving educational tours to school children and at the Wellcome Collection, where I worked in Visitor Services, interpreting the collections and running small events.

I am most proud of the Bloomsbury Festival activities that I put together recently, which ran from 15-20 October. The festival has been running for a few years, and I was previously involved at Wellcome, but it was great to be able to put together a cohesive programme of small events,and help out other people at UCL who were taking part this year.

Our headline event was the UCL Ideas Salon - a marquee on Russell Square, right in the heart of the festival, where 11 top UCL academics from all over the university ran discussion sessions with locals and festival-goers.

It's such a simple idea, but it really opens up channels for conversation between researchers and public audiences.

Professor Philip Schofield from UCL Laws highlighted Jeremy Bentham with an entertaining talk in the South Cloisters; we also had a walk led by Carole Reeves from  UCL Science and Technology Studies; and some really interesting PhD students from the UCL School of Life and Medical Sciences giving short lectures in local workplaces.

My next project is to run our big Bloomsbury Theatre Bright Club on Tuesday 5 November. There will be 10 UCL researchers doing stand-up about their work and three professional comedians to help them out. We run these about two times a year as a celebration of our smaller gigs.

We can fit 500 people in the audience, so I am working to fill as many of those seats as possible! If you like the sound of it, tickets are on sale from the Bloomsbury Theatre website.

Album: I don't really listen to albums, just the radio, so I couldn't say!

Film: I love films, but I never really re-watch them. So I'd say 10 Things I Hate About You is probably my favourite from being a teenager - but I haven't seen it in years!

Novel: I am a ferocious reader - mostly a lot of trashy sci-fi - but my favourite novel is probably The Dispossessed by Ursula K Le Guin, which is slightly more highbrow. She is generally amazing and explores really interesting cultural or political ideas by writing about them on other worlds. This one is all about anarchy and a must-read for anyone, no matter what their political persuasion is.

Despite running a comedy night (Bright Club) I can't think of any jokes!

I'd like to reunite some old Blue Peter presenters, so Tim Vincent and Diane Louise Jordan, (you can tell which was my 'Blue Peter era'!) and then throw in Matt Baker for good luck. It's my dream job, so they could give me some tips on how to get there!

Climb more trees! Or just get outside more. You don't realise how much you miss being able to do that when you are a grown-up and live in a massive city.

My first job out of university was at Buckingham Palace. Sadly, I didn't get to meet any royals - but I did once stroke the corgis.

Highgate ladies' pond. I'm not quite sure how I lived before I discovered this place! I am yet to brave them later in the year than September though.