This week the spotlight is on Professor Ijeoma Uchegbu, Professor of Pharmaceutical Nanoscience, UCL School of Pharmacy What is your role and what does it involve? I teach pharmacy students and carry out drug delivery research. 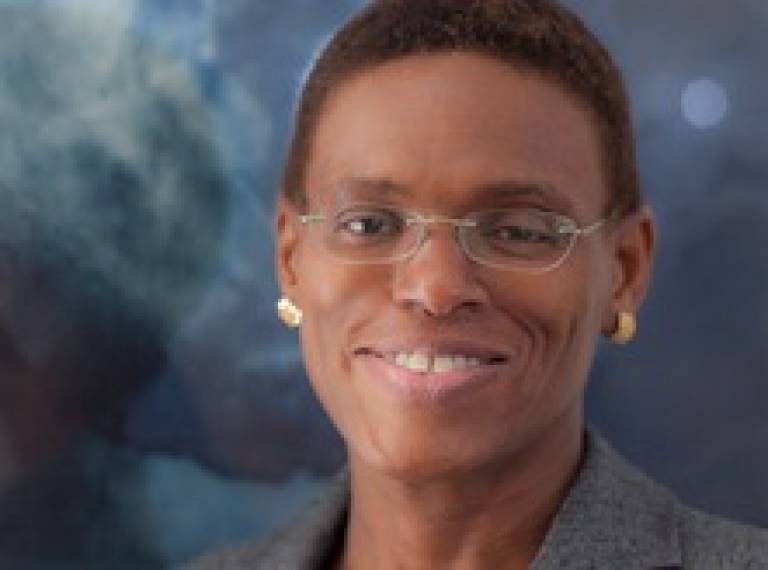 Our laboratory is currently developing a new pain therapeutic based on a molecule secreted in the brain.

We have an excellent team of collaborators and researchers who have shown that the molecule, when encapsulated in nanoparticles, provides pain relief in both chronic and acute pain animal models. Without the nanoparticles the molecule does not work.

Chronic pain is an area poorly served by current medicines and it is estimated that only a quarter of chronic pain patients experience at least a 50% relief in their symptoms.

I have been at UCL for almost two years and I previously worked at the School of Pharmacy in Brunswick Square. My new job did not involve a change of address or having to relocate my family as our department merged with UCL in January 2012.

In my previous role at the School of Pharmacy, I did more or less the same thing - carry out drug delivery research and teach pharmacy students. In fact come to think of it, I am still in the same office and laboratory and so nothing has really changed.

I am really proud of some of the work we have published on the delivery of peptides to the brain. By getting together an excellent team of collaborators such as Andreas Schätzlein, also of the School of Pharmacy, and Julian Moger of Exeter University, we were able to show convincingly that we could deliver peptides to the brain, enabling these peptides to cross from the blood to the brain, by packaging them in our nanoparticles.

Based on these results, Dr Schätzlein and I spun out Nanomerics Ltd about three years ago, licensing the intellectual property from the former School of Pharmacy. It has been a hard slog, with some unpleasant, heart-stopping moments, but things are going well at the moment.

At the moment we are all working hard on our pain therapeutic. We have shown that the technology works in animals and now we are trying to make a medicine that patients can take.

On the top of my to-do list is a scary meeting with the regulator - I am hoping that they agree with our plans as we want zero surprises at this stage. To be honest we have a long way to go as we have not tested our prototype medicine in the clinic yet and I am looking forward to the day that the first patients are dosed and am hoping that things continue to go well for the project.

Oh dear I really only listen to the pop songs that I used to dance to as a young woman, such as Bob Marley's Punky Reggae Party and Mark Morrison's Return of the Mack.

Recently, however, as a result of my teenage daughter I have been listening to Adele's Rolling in the Deep quite a bit. I tend to listen to music in an unorthodox fashion, with one song on repeat until my family beg me to stop!

With films I love thrillers but do not get to the cinema much. The last film I watched was Skyfall, and for the first time I realised how much of the James Bond genre was sheer fantasy - I was under the impression these were spy thrillers prior.

With respect to books, I loved Frank McCourt's Angela's Ashes as I could cry a lot. (I love a good cry.) Generally though I tend to read non-fiction books and have just finished reading Scarcity: Why Having Too Little Means So Much by Sendhil Mullainathan and Eldar Shafir. This is a great book, the central thesis of which is that the poor lack the "bandwidth" to be creative and make optimum decisions as their cognitive energy is focused on merely surviving.

Sorry, all my favourite jokes are absolutely filthy!

Oh God. Stop being such a wallflower and enjoy the party!

I am quite good at "Mum Dancing."

Without a doubt - London. It is the best, literally the best, city in the world.  No question.