UCL is to establish a new Centre for the Study of Decision-Making Uncertainty with an initial $250,000 grant from the Institute for New Economic Thinking. 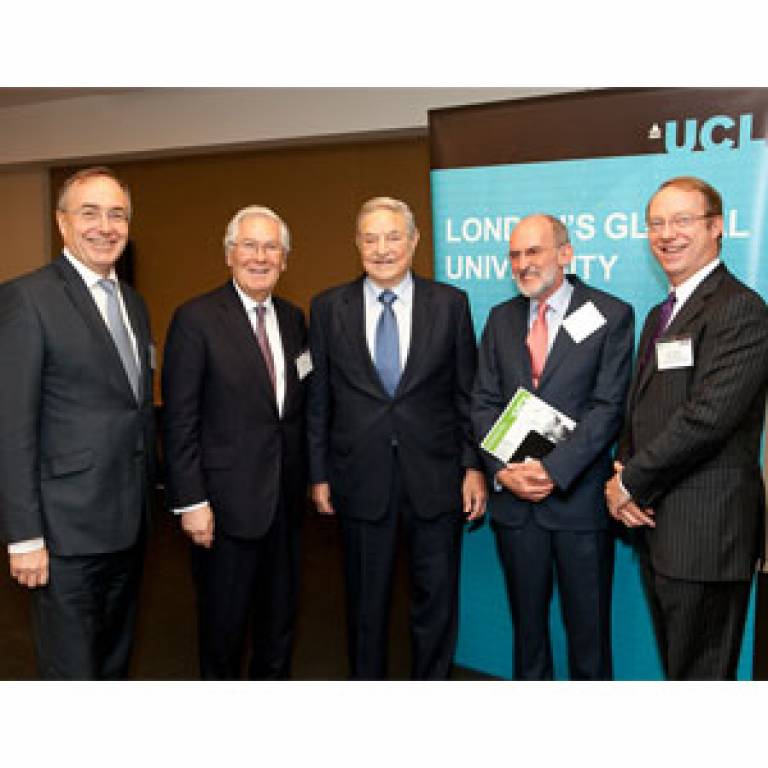 The new Centre will address the ongoing intellectual and policy challenges unleashed by the global financial crisis, and will be the first in the world to focus on why individuals and groups think and act in specific ways when faced with uncertainty.

Announced during the first international trip of new UCL President and Provost Professor Michael Arthur to the USA, the Institute for New Economic Thinking has also said that it will give $1 in additional funding for every $2 UCL raises from other donors towards the new Centre.

The funding was announced at a high-level roundtable held at European bank BNP Paribas in New York City, organised by UCL in conjunction with UCL alumnus Mark Howard, Head of US Credit Analysis and Strategy at the bank's offices in New York.

The event saw UCL alumni, friends and corporate partners from across the US gather to hear the thoughts of investor George Soros and former Governor of the Bank of England, Lord King of Lothbury, on the necessity of new economic thinking as the world economy recovers. The event was chaired by UCL President and Provost Professor Michael Arthur.

It will be headed by visiting Professor of Psychoanalysis at UCL, David Tuckett. Professor Tuckett has written extensively on financial markets and risk and the role of the unconscious and emotions in affecting financial decision making. In particular, the Centre will examine the social, psychological and neurobiological factors that affect decision-making in finance and elsewhere.

Professor Tuckett is already working with the Bank of England on several pilot projects, including new methods to measure risk building in financial institutions, similar to the kind which occurred before the financial crisis.

The Centre will also utilise Big Data to build a more accurate picture on a macro scale of financial decision making and sentiment. For example, Professor David Tuckett has recently led research analysing ten years of Reuters news reports about Fannie Mae, revealing a gradual but striking disconnect between conviction and 'reality'.

Uncertainty is a significantly neglected area of decision making in general - and economic and financial decision-making in particular.

The research has found that between 2005 and 2007, stories about Fannie Mae became relatively full of excitement and increasingly free of anxiety - share price and sentiment rose together despite the levelling out of actual house prices. This was followed in 2008 with a huge reversal in sentiment which also tracked declines in share prices. It is a revolutionary new approach to economics: systematically showing how narratives develop independently of the facts yet with very real consequences for financial markets.

Setting out the need for the Centre and its research in advance of his participation at the roundtable in New York City, George Soros, Co-Founder of the Institute for New Economic Thinking and author of the seminal The Alchemy of Finance, said:

"Economic theory needs to be rethought from the ground up. I am delighted that one of the world's leading universities has chosen to support David Tuckett. He has already developed some promising approaches. The real economy is the complex and uncertain outcome of human agents interacting reflexively and we need to understand much more about that."

David Tuckett, Visiting Professor of Psychoanalysis at UCL and new Director of the UCL Centre for the Study of Decision-Making Uncertainty, said:

"Uncertainty is a significantly neglected area of decision making in general - and economic and financial decision-making in particular. We expect further research to throw considerable light on the social, psychological and neurological aspects of the way people manage to develop the conviction to act when things are uncertain and to understand much more about what can go wrong."

Mark Howard, Head of US Credit Strategy at BNP Paribas and an alumnus of UCL, added:

"BNP Paribas in a leading Global bank and as such we are always looking to improve our understanding of how market participants make decisions and conceive of risk."

Rob Johnson, President of the Institute for New Economic Thinking, which has pledged an initial grant to fund the Centre, said:

"Economics is a human endeavour, human made with human elements. David Tuckett is well on his way to showing us how different modes of systematic analysis can shed light on the behaviour of the economy and surpass the mechanical economics that should have withered long ago.

"Investors and government officials will all benefit from Tuckett's insights. As a result, all levels of society will be less likely to be subjected to the bumpy ride of an ill-conceived and poorly regulated financial system architecture built on false premises."

Image (from left): Professor Michael Arthur (UCL President & Provost), Mervyn King (Former governor of the Bank of England), George Soros (Co-Founder of the Institute for New Economic Thinking), Professor David Tuckett (Director of the UCL Centre for the Study of Decision-Making Uncertainty), Mark Howard (Head of US Credit Strategy at BNP Paribas and an alumnus of UCL)