A specialist £20 million research centre, funded by the Wolfson Foundation and dedicated to carrying out first-in-human studies, opens in London today. 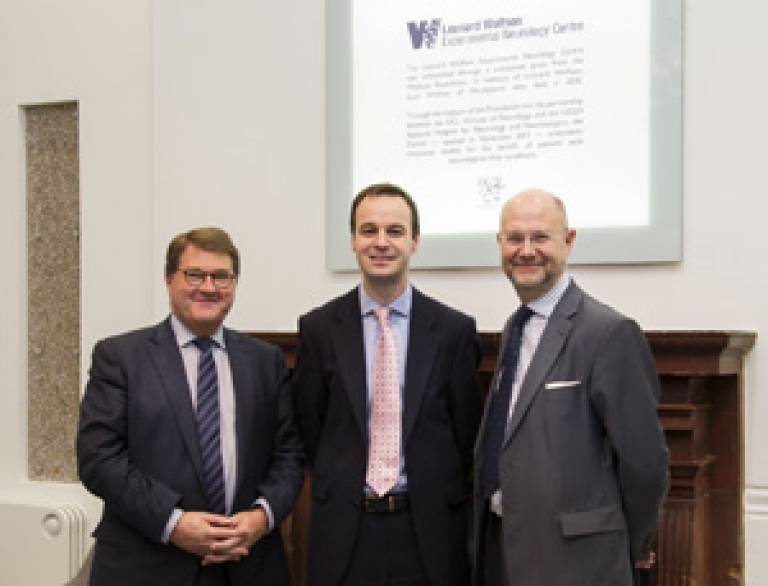 Researchers at the Leonard Wolfson Experimental Neurology Centre (LWENC) will investigate exciting new therapies for neurodegenerative diseases such as Alzheimer's and Parkinson's.

The LWENC will receive its first patients in early 2014 and one of the first trials to be carried out at the facility will investigate whether immunotherapy can be used to tackle familial Alzheimer's disease - a debilitating illness which can affect people in their 30s and 40s.

The new centre has been funded by a £20 million award from the Wolfson Foundation to UCL. In addition to setting up the experimental neurology centre, the money has also been used to establish a new education and research programme that builds on UCL's cross-disciplinary expertise in neuroscience to provide unique training opportunities for future generations of neurodegenerative disease researchers. The grant is the largest single award ever made by the Foundation and one of the largest philanthropic donations in UCL's history.

The Leonard Wolfson Centre will be the perfect bridge between the research strengths of UCL Neuroscience and the application of potential new therapies to patients with neurodegenerative disorders in the expert clinical setting of Queen Square.

Paul Ramsbottom, Chief Executive of The Wolfson Foundation, says: "Our aim is to support excellence in science, medicine, health, education and the arts. With this award we wanted to highlight the fact that research into neurodegenerative diseases is relatively underfunded.

"Neurodegenerative diseases are the sixth leading cause of death, a major cause of disability and residential care placement, and the main cause of dementia in the UK. By 2025, one million people will be affected by dementia - unless effective therapies are found. Dementia alone is estimated to cost the UK economy some £23bn a year, more than cancer and heart disease combined, yet UK government and charitable investment in dementia research is twelve times lower than spending on cancer research."

Nick Fox, Professor of Neurology at UCL and a Principal Investigator in the new Leonard Wolfson Experimental Neurology Centre, says: "The highest priority for patients with neurodegenerative diseases is to find treatments that slow or halt the progress of the disease or delay its onset. These treatments should be offered as early as possible to minimise impact on loss of cognitive and neurological functions. Experience across medicine shows that treatment of advanced disease may come too late.

"At the Leonard Wolfson Experimental Neurology Centre we aim to speed up the development and validation of treatments, and open an earlier window to patients through which we can provide treatment and try to minimise the damage caused by neurodegenerative disease."

The Leonard Wolfson Experimental Neurology Centre will be located at the heart of the National Hospital for Neurology and Neurosurgery, a national referral centre for patients with neurodegenerative diseases. In addition to being able to work with the hospital's specialist clinics and patient cohorts, scientists at the Centre will also benefit from UCL's position as Europe's research powerhouse in neuroscience, tapping into an unrivalled wealth of expertise and knowledge.

Professor Alan Thompson, Dean of the UCL Faculty of Brain Sciences, says: "The Leonard Wolfson Centre will be the perfect bridge between the research strengths of UCL Neuroscience and the application of potential new therapies to patients with neurodegenerative disorders in the expert clinical setting of Queen Square. It will facilitate the all-important step of translating drug discovery into effective treatment."

Professor John Duncan, divisional clinical director for the National Hospital for Neurology and Neurosurgery, says: "We are delighted to see the opening of the Leonard Wolfson Experimental Neurology Centre in the National Hospital for Neurology and Neurosurgery at Queen Square. This centre will see the first treatments for debilitating neurodegenerative conditions, and will bring forward when these treatment can be offered in the clinics. This is a huge step forward and is only possible with the close cooperation of University, Hospital and the Wolfson Foundation."