Think you can figure out a way to unlock one of the biggest secrets of the universe? The recently launched third Gravitational Lensing Accuracy Testing challenge (GREAT3) is giving researchers the opportunity to do just that. 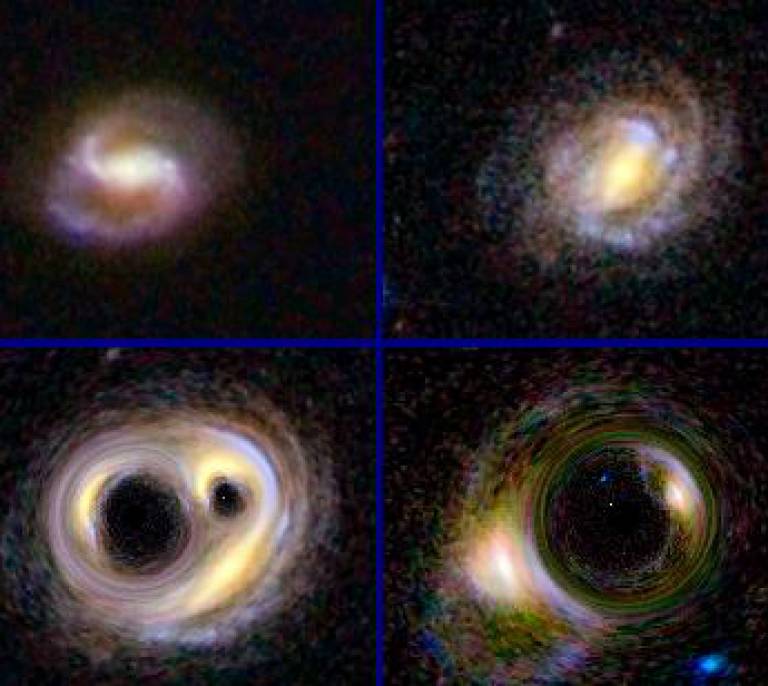 GREAT3, which is led by Carnegie Mellon University's Rachel Mandelbaum and UCL's Barnaby Rowe, invites researchers from fields including astrophysics, statistics and machine learning, to test new and existing methods for measuring weak gravitational lensing. Weak gravitational lensing is one of the most direct - but also most difficult - ways scientists have to learn about the mysterious invisible dark matter and dark energy that dominates our universe.

"In previous challenges, people have come up with entirely new methods for measuring weak gravitational lensing that we are using in practice today. We're excited to think about what people will come up with in this challenge, and to think about what new information we'll learn about existing methods for measuring weak lensing," said Dr Mandelbaum, who is an assistant professor of physics and member of the McWilliams Center for Cosmology at Carnegie Mellon.

When light from distant galaxies travels through the universe, its path is deflected as it passes by other galaxies or large clumps of matter, including dark matter. This effect, called weak gravitational lensing, results in small distortions in how distant galaxies are viewed from earth and space-based telescopes. Scientists can use lensing measurements to map dark matter and study how it has changed over time. As a result, they can better understand dark energy.

Analysing weak lensing is tricky, there are a number of things in the atmosphere and in our instruments that can meddle with our data. GREAT3 is a fair test to see how new and current methods handle these types of problems and provide accurate results.

Measuring weak lensing, however, is extremely difficult. The distortions are so tiny that researchers must collect and sift through data from millions of galaxies. They must also be able to correct for things like blurring caused by telescopes or the atmosphere.

"Analysing weak lensing is tricky, there are a number of things in the atmosphere and in our instruments that can meddle with our data," said Dr Rowe (UCL Physics & Astronomy).  "GREAT3 is a fair test to see how new and current methods handle these types of problems and provide accurate results."

In the challenge, participants download simulated data created by GalSim, an open-source image simulation software package developed by a team including Mandelbaum and Rowe for GREAT3. The images, which are similar in format to what is gathered by today's high-powered telescopes, contain galaxies that have some weak lensing distortion that is known only to the developers of the challenge.

The competition is not just open to scientists studying weak lensing. In fact, the organizers hope that researchers from other areas of science, like machine learning and statistics, will join the challenge. "Computer scientists and particle physicists excelled in previous challenges," said Rowe, "And this brings new skills and ideas to the problem."

"For those outside of the astrophysics community, there can be a great barrier to studying weak lensing," said Mandelbaum. "But fields like machine learning could prove to be invaluable for helping us pull information out of our huge data sets, which can contain tens of millions of galaxies. The controlled nature of the simulations, along with the simple and well-described data formats used for the challenge, lowers the barrier to entry for people outside of astronomy."

Information about GREAT3 is available at the challenge website and data for GREAT3 is also available (both links below). Participants have until April 30, 2014 to complete the challenge, and the winner will receive a prize such as a laptop, in addition to worldwide recognition of their efforts.

GREAT3 is funded by NASA through the Strategic University Research Partnership Program of the Jet Propulsion Laboratory, California Institute of Technology and the IST Programme of the European Community under the PASCAL2 Network of Excellence.

Image: Detail from the Warped Galaxies Quiz. Qalaxy warping occurs naturally in a phenomenon called strong gravitational lensing. The gravity of matter in front of a more distant galaxy, either dark or normal matter, bends and twists the galaxy's light, resulting in wacky shapes and sometimes multiple versions of the same galaxy. It's like seeing a galaxy in a funhouse mirror. Credit: UCL/NASA/JPL-Caltech