Professor Christopher Pinney (UCL Anthropology) has been awarded the fourth highest civilian award in the Republic of India for his contributions to Literature and Education. 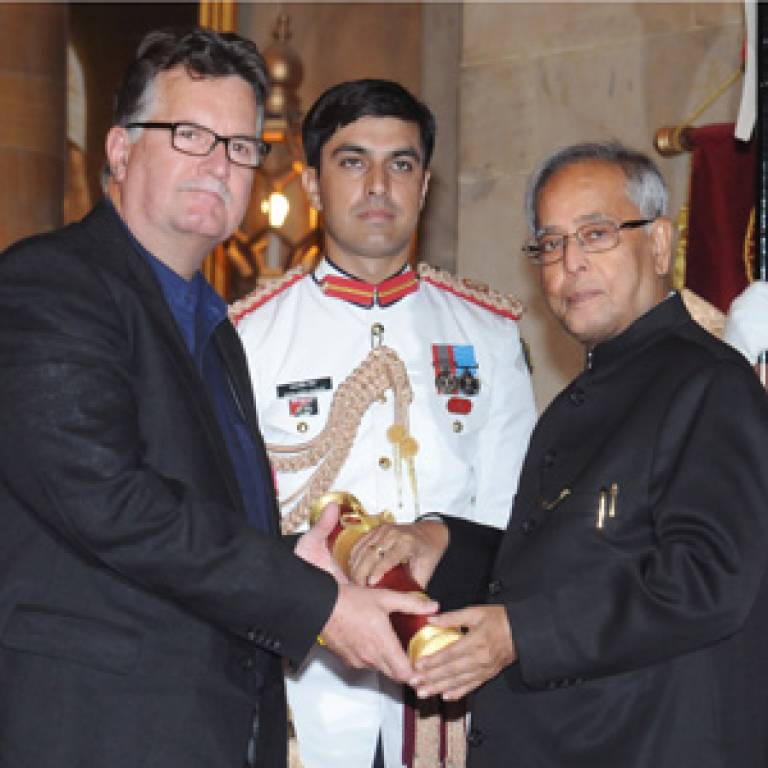 He was presented with the Padma Shri last month by the President Pranab Mukherjee at his official residence, the Rashtrapati Bhavan in New Delhi, in the presence of the Prime Minister Manmohan Singh.

Announced on Republic Day each year, there are of four kinds of Padma awards which cover various categories from Sports, to Social Work and Literature and Education.

This year 108 Padmas were awarded, but only six were given to non-Indian nationals of whom three were persons of non-Indian heritage.

Professor Pinney said: "I found myself surprised by how moved I was by the gesture. I remember in 1983, during the course of my PhD research being destitute in Delhi after all my belongings were stolen on a train. So driving through the back gates of Rashtrapati Bhavan provoked reflections about earlier experiences. Best of all was that my companions for the awards were my oldest village friends from Madhya Pradesh, Pukhraj and Priti Jain."

Each year the Padmas get huge publicity, with awards to celebrities - especially filmstars and sportsmen - achieving a great deal of media coverage in India. This year awardees included the filmstars Sridevi and Nana Patekar, and Ramesh Sippy the director of the famous "curry western" Sholay.

On his experience of the awards, Professor Pinney said: "The ceremony itself was, probably unavoidably, intimidating: rather like waking up in the middle of a nineteenth-century history painting. The high points for me, apart from meeting the President, the Prime Minister and Sonia Gandhi and actually being able to see inside Rashtrapati Bhavan, which is closed to the public, was being able to introduce Pukhraj and Priti to the film director Ramesh Sippy who proved to be remarkably charming and generous with his time."

Professor Pinney has worked on popular visual culture in central India since 1982 and has taught and lectured widely in India. His research interests cover the art and visual culture of South Asia, with a particular focus on the history of photography and chromolithography - a method for making multi-color print - in India.

Professor Pinney's publications cover photography and printed political and devotional images. His first book was Camera Indica, while his latest, due later this year, is Lessons from Hell on popular printed Hindu images of punishment in hell.