The Grant Museum of Zoology at UCL has been voted the winner of the inaugural Culture Pros Pick at the Museums + Heritage Awards - the Oscars of the museum world - at the awards ceremony last night. 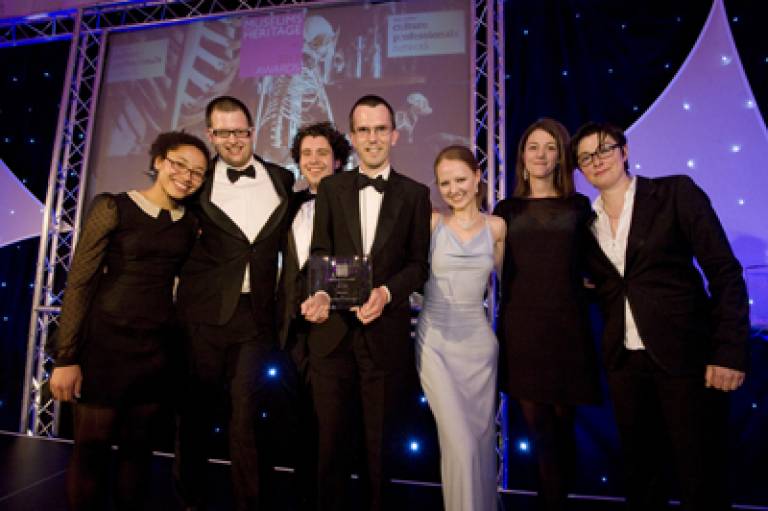 The Guardian Cultural Professionals Network launched a search for the UK's most inspiring museum or heritage visitor attraction of the past 12 months. A shortlist of the five with the most nominations was then put up to a further public vote. The Grant Museum has been named the winner.

Founded in 1828 as a teaching collection, the Grant Museum is one of the world's oldest natural history collections and the Museum is packed full of skeletons, mounted animals and specimens preserved in fluid.

Among the 68,000 specimens held at the Grant Museum are some of the rarest extinct animal specimens in the world. The Museum contains dodo bones, the remains of a quagga (an extinct species of half-striped zebra) and a giant deer with antlers measuring over 3 metres across.

"This is such a wonderful award - being named by the public as the UK's most inspiring museum - I really can't think of a more delightful accolade," said Jack Ashby, Manager of the Grant Museum.

This is such a wonderful award - being named by the public as the UK's most inspiring museum - I really can't think of a more delightful accolade,

He added: "We are only a small team but we all work extremely hard to make innovative and inspiring experiences for our visitors. Every member of staff is heavily involved in engaging the public with their work. I think this what our audiences appreciate - that they really get to see what museums and universities do."

The Museum runs an active programme of events and exhibitions for adults and families including film nights, treasure hunts, panel debates, talks and show and tells.

They have been praised for their engaging blogs and social media work, which feature work behind the scenes at the museum, Underwhelming Fossil Fish of the Month and debates such as "Would zoologists survive an apocalypse?"

The Grant Museum of Zoology is open from 1-5pm Monday to Saturday. Admission is free and there is no need to book.