Behaviour of seabirds during migration revealed

The behaviour of seabirds during migration - including patterns of foraging, rest and flight - has been revealed in new detail using novel computational analyses and tracking technologies. 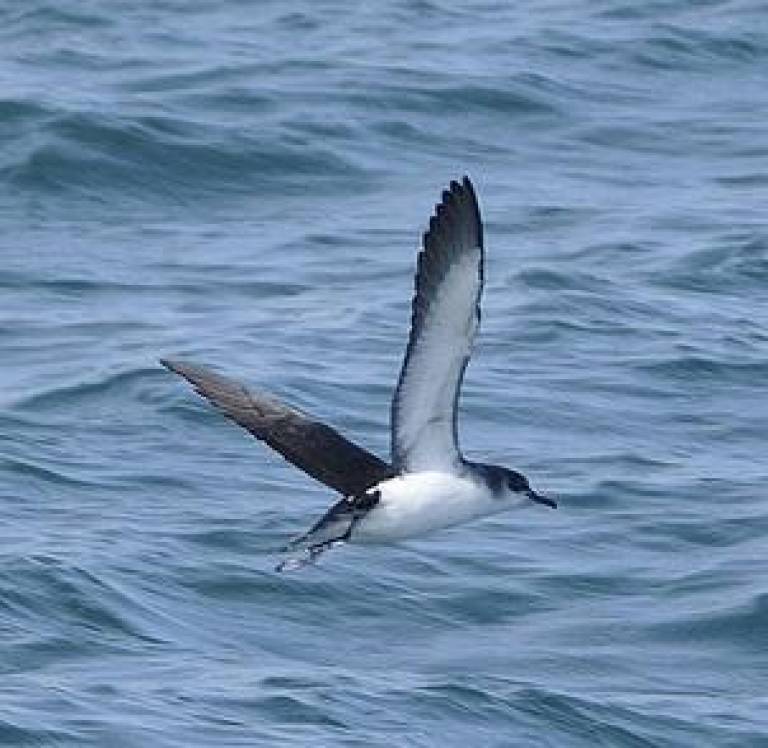 Using a new method called 'ethoinformatics', described as the application of computational methods in the investigation of animal behaviour, scientists have been able to analyse three years of migration data gathered from miniature tracking devices attached to the small seabird the Manx Shearwater (Puffinus puffinus).

The Manx Shearwater is currently on the 'amber' list of UK Birds of Conservation Concern. Up to 80% of the world population breeds in the UK, travelling 20,000km each year in their migrations to South America and back.

In a continuing long-term collaboration, researchers at UCL and the University of Oxford collected data over three consecutive years. In this study, published in the Royal Society journal Interface, they show that the migration of the Manx Shearwater contains a complex pattern of three behavioural states; rest, flight and foraging.

Results indicate that in winter, birds spend much less time foraging and in flight than in breeding season. Also, a much larger proportion of birds' time in the southern hemisphere was spent at rest - probably a reflection of their release from the demands of reproduction and also the increased costs of flight during the winter.

Understanding the behaviour of these birds during migration is crucial for identifying important at-sea locations and for furthering conservation efforts. By tracking the movements, foraging behaviour and environmental drivers of such species, and developing new techniques to do so is critical as they continue to be subject to environmental and anthropogenic pressure.

Dr Robin Freeman, from the UCL COMPLEX (Centre for Mathematics and Physics in the Life Sciences and Experimental Biology), and first author of the study, said: "Understanding the behaviour of these birds during migration is crucial for identifying important at-sea locations and for furthering conservation efforts. By tracking the movements, foraging behaviour and environmental drivers of such species, and developing new techniques to do so is critical as they continue to be subject to environmental and anthropogenic pressure."

He added: "Methods to understand animal behaviour from complex data series - what we're calling 'ethoinformatics' - are increasingly important as we continue to gather large amounts of data about animals in the wild."

Professor Tim Guilford, who leads the team at the University of Oxford, said: "At the Oxford navigation group, we have been able to gather an unprecedented amount of information about these elusive ocean wanderers. We trying to understand the processes that govern the behaviour seabirds at sea, and the decisions they must make during migration and foraging."

During the study, birds were fitted with miniature geolocators and lightweight GPS loggers. The geolocation devices have been developed by the British Antarctic Survey and record salt-water immersion and light levels. Using behaviours identified from GPS tracking during the breeding season, the team demonstrated that these behaviours could be predicted solely from data collected by the much smaller immersion-loggers.

Unlike other devices that limit broad use because of their mass, cost and longevity (life span), these devices can record continuously for many years and weigh less than two grams.

During the birds' migratory journey the team identified areas of high foraging behaviour, with concentrations off south-eastern Brazil during the southbound journey and in the Western Atlantic during the return. Rest also occurs throughout migration, with greater concentration towards the very end of the route in both directions. This could reflect distinct stopover types, like foraging stopovers to take advantage of the high prey availability or rest stopover to recover from long flight periods.

The researchers also discovered that the birds' behaviour responded to different environmental conditions. There was a significant relationship between behaviour and environmental variables such as net primary production (the rate at which all the plants in an ecosystem produce net useful chemical energy), chlorophyll and sea surface temperature. During migration, resting behaviour was found to occur in much more productive waters than other behaviours.