Grant Museum taken over by artists for Sculpture Season

Sculpture Season at the Grant Museum of Zoology at UCL opens this week. 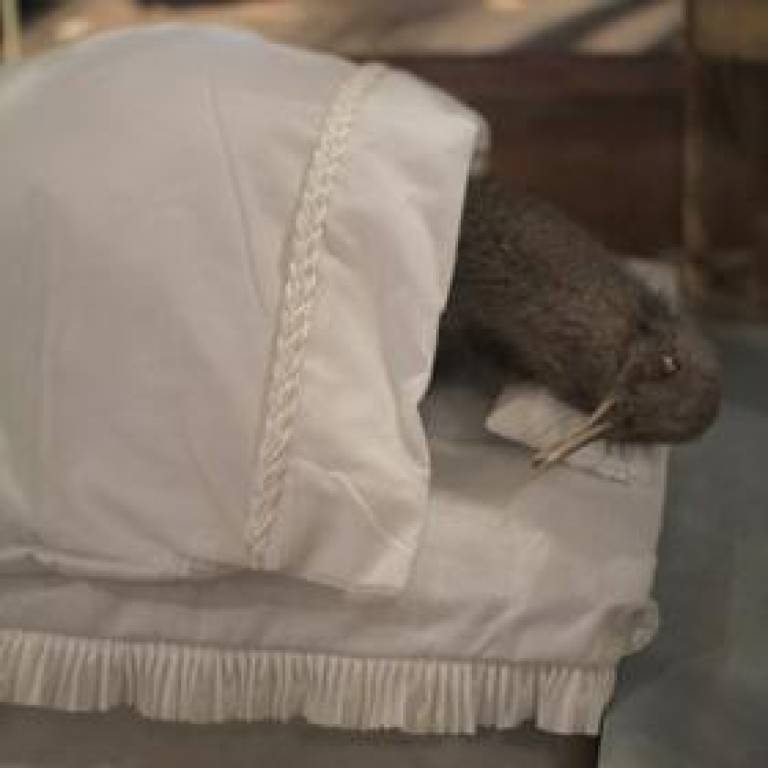 13 emerging artists from the UCL Slade School of Fine Art have been invited to re-curate the Museum's spaces with their own sculptures, interpretations and installations.

The artists have responded to the physical spaces and specimens of the Museum, creating music technologies, phantom occupations of the Museum's iPad apps, hand-knitted internal organs and explorations of the excessive masculinity of giant deer antlers. Specimens have been re-ordered, re-labelled and reimagined.

Founded in 1828 as a teaching collection, the Grant Museum is one of the world's oldest natural history collections and the Museum is packed full of skeletons, mounted animals and specimens preserved in fluid. Last month it was voted the winner of the Guardian Cultural Pros award - a search for the UK's most inspiring museum - at the Museum + Heritage Awards.

Among the 68,000 specimens held at the Grant Museum are some of the rarest extinct animal specimens in the world. The Museum contains dodo bones, the remains of a quagga (an extinct species of half-striped zebra) and a giant deer with antlers measuring over 3 metres across.

"It is so exciting to see the collection through the eyes of this diverse group of artists," said Jack Ashby, Manager of the Grant Museum. "Allowing the Museum to be taken over by undergraduate sculpture students has been a really exciting, and occasionally nerve-wracking, project. The results are fantastic."

"The invitation to run the Museum's first Sculpture Season is timely: there is a huge resurgence of interest in animism at the moment" said Melanie Jackson, Head of Undergraduate Sculpture at the Slade School of Fine Art, who worked with the artists.

She added: "It allows the artists to position their work in a unique setting that helps tease out what is at stake, to speculate on what these new definitions of animism might become, and their own relationships with processes of art-making."

Sculpture Season runs until 31st August. The Grant Museum of Zoology is open from 1-5pm Monday to Saturday. Admission is free and there is no need to book.