EIB and UCL to cooperate on new infrastructure finance course

The European Investment Bank and University College London have agreed to work together to support a new post-graduate course in Infrastructure Investment and Finance. 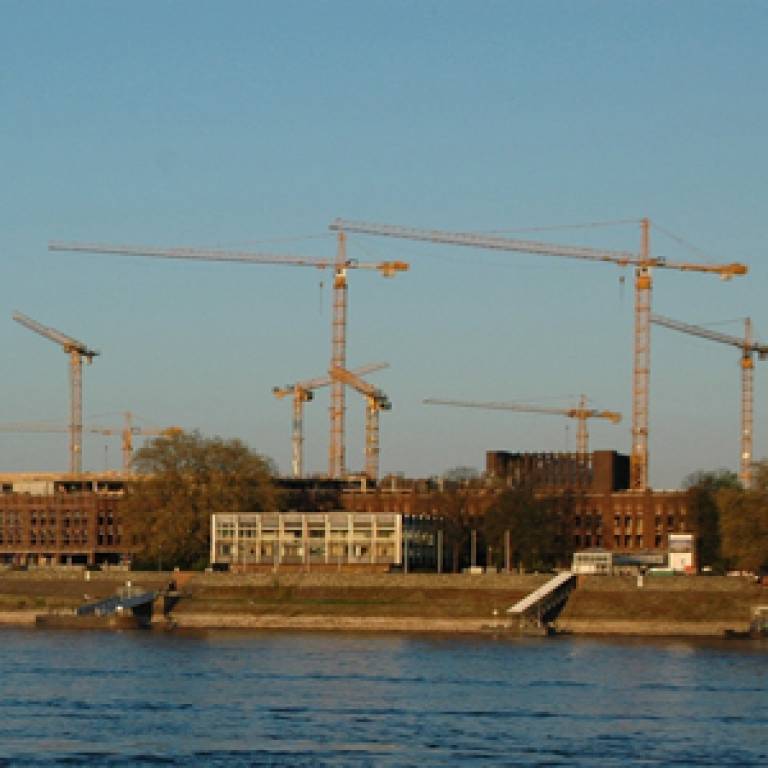 The unique Masters of Science course will benefit from practical experience provided by the European Investment Bank, the world's largest supranational lending institution.

Cooperation between UCL and the European Investment Bank was formally agreed by representatives of both institutions at UCL and the cooperation is coordinated by the EIB Institute.

"Effective planning and financing of infrastructure, alongside awareness of global best practice, can drive economic growth and help address energy, transport and communications challenges across Europe and around the world. The European Investment Bank looks forward to sharing our experience with UCL and through the EIB Institute supporting The Bartlett as a recognised global centre of infrastructure policy expertise and academic excellence. " said Jonathan Taylor, European Investment Bank Vice President.

"The new 'first in class' Masters of Science degree in Infrastructure Investment and Finance recognises the importance of infrastructure for stable, sustained growth and prosperity across the developed and developing world. Governments in the UK and elsewhere are increasingly focussing on the role that infrastructural investment can play in leading economies out of recession, promoting long-term sustainable growth and protecting the environment. Knowledge of infrastructure finance and investment is essential for ensuring sustainable and politically feasible infrastructure." said Dr Andrew Edkins, Director of The Bartlett School of Construction and Project Management.

The new 'first in class' Master of Science degree in Infrastructure Investment and Finance recognises the importance of infrastructure for stable, sustained growth and prosperity across the developed and developing world. Governments in the UK and elsewhere are increasingly focussing on the role that infrastructural investment can play in leading economies out of recession, promoting long-term sustainable growth and protecting the environment.

The degree programme, which inspired by the work of UCL's Graham Ive, will be based in The Bartlett School of Construction and Project Management. In recognising the global strategic importance of this area, The Bartlett has appointed Michelle Baddeley as UCL's inaugural Professor of Economics and Finance of the Built Environment and Dr Aris Pantelias as the course director for the MSc in Infrastructure Investment and Finance. They join a very strong academic team at UCL who are focussing their expertise across a range of infrastructure issues.

Staff from the EIB will participate in teaching on the new Masters programme. It is envisaged that staff will also pursue joint research projects with UCL staff and offer traineeships and placements to students in the Bartlett. The Bartlett is UCL's world-leading faculty for multidisciplinary education and research for the built environment. As the UK's largest multidisciplinary faculty of the built environment including architectural design - with nearly 400 staff, including over 30 professors - The Bartlett was the highest rated institution in its field for research in the 2008 UK Research Assessment Exercise.

The EIB Institute was created in 2012 in order to promote European initiatives for the common good. It does it through three programmes relating to knowledge, the social dimension, arts and culture. The Knowledge Programme supports initiatives in the field of education and research, in the framework of which this cooperation agreement would be fostered and implemented.

The European Investment Bank is the European Union's long-term lending institution and was founded in 1958 by the Treaty of Rome and is owned by the 27 EU member states. It is the world's largest multilateral development institution and last year provided nearly EUR 52 billion for projects across Europe and around the world.

Over the last 5 years the EIB has provided more than EUR 26.4 billion for infrastructure investment and small businesses in the UK. Well known projects that have recently benefited from significant EIB support include new Eurostar and London overground trains and Manchester's Metrolink trams, the London Array wind farm and London Gateway port and widening of the M25. The benefits of new investment can already be seen following EIB support for new Nissan production in Sunderland, social housing in the Olympic Village and Heathrow Terminal 5.

The Bartlett School of Construction and Project Management