UCL students were among the 32 participants of this year's Hackin' the City Winter Hackathon, organised by the UCL Financial Industry Series. 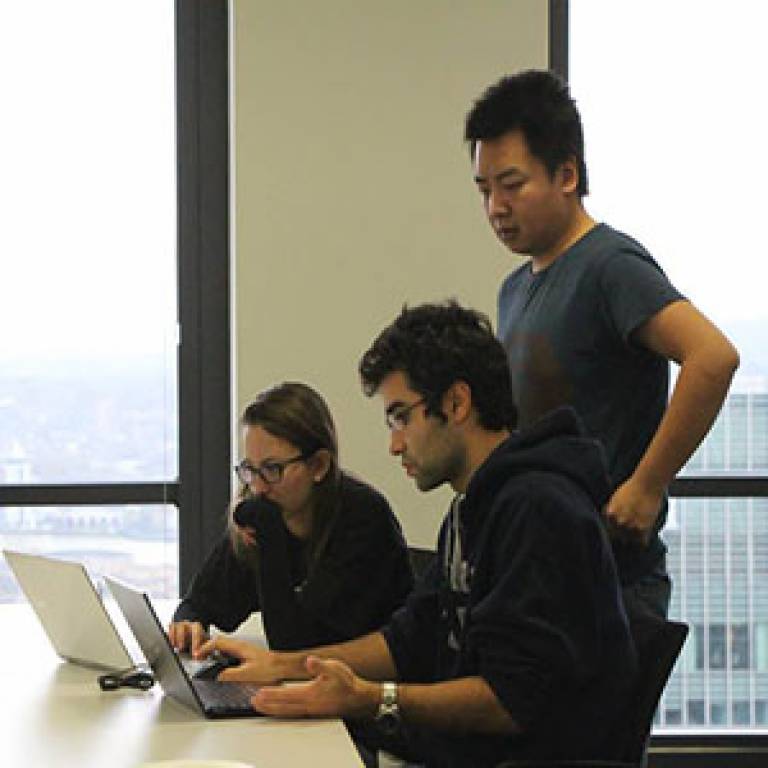 Taking place at Level 39 in Canary Wharf, the event provided a platform for the brightest computer science students in the country to pit their skills against each other in a round-the-clock hackathon.

The contestants came from a range of academic backgrounds such as computer science, physics, mathematics and finance. This year the organisers saw an increase in the number of women, who made up 20% of the group.

The theme of the event was "Workplace Optimization" where seven teams competed to build ways to make the workplace more efficient. The teams had to brainstorm and design software solutions for the task over a 24 hour period, with assistance from mentors provided by RBS.

Donald Lawrence, Visiting Professor at UCL Computer Science, said: "Most of the developers participating had signed up as individuals and were strangers to each other at the start of the event. The ability to work sufficiently well with a team so as to take an idea and develop it to completion was both rare and admirable and it was therefore pleasing to see every team succeed in this regard.

"Overall, the event was a great success with great teams and projects built, some of which look to be continuing well beyond the Hackathon, having already intrigued more than one investor."

The event was judged in two rounds by a panel of judges, with each team having five minutes to pitch their idea which was followed by 5 minutes of questions from the judges.

1st Place: Team Kudos, whose idea was to allow individuals to give "kudos" to colleagues for doing them favours in a work context - fostering collaboration.

3rd Place: Team Trackers, who built a mood tracker application, which tracked the mood of employees over the day, aiming to improve productivity.