Leading the world on dementia

The Prime Minister today called for a global effort to tackle one of the greatest challenges of our time: dementia. 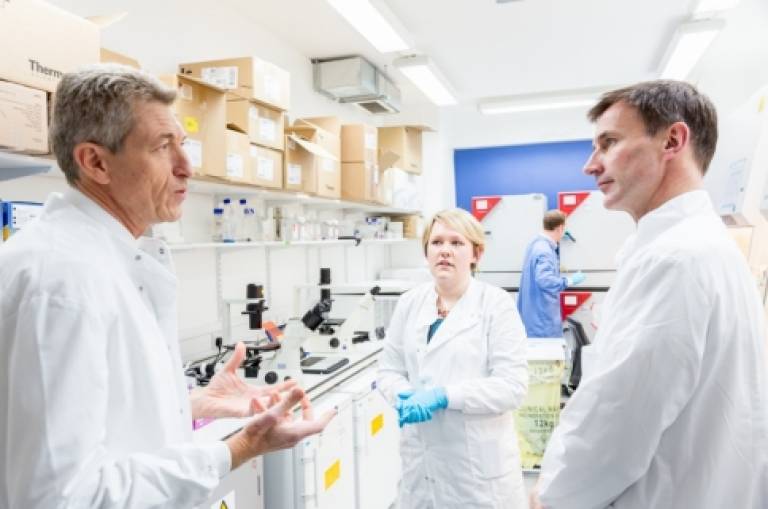 UCL scientists, working with clinicians at the university's partner hospitals, are at the heart of the battle to treat the condition.

The UK is using its presidency of the G8 to spearhead a global effort to tackle dementia.

To better understand the challenges that lie ahead, the Secretary of State for Health Jeremy Hunt recently visited a hub of scientists and clinicians leading dementia research projects.

Mr Hunt was given a tour of facilities at the UCL Institute of Neurology and the National Hospital for Neurology and Neurosurgery (NHNN), part of University College London Hospitals NHS Foundation Trust.

The NHNN and neuroscientists based at UCL are at the research epicentre. Clinical researchers are faced with several challenges: they must develop new treatments to prevent, slow or stop the disease - and identify as early as possible those who will benefit from these treatments - and improve the treatment and care of those affected now.

Mr Hunt observed ongoing research designed to better understand the causes of dementia and changes to the brain and met scientists working on understanding the molecular basis of Alzheimer's disease and other forms of dementia using stem cells as a model.

Mr Hunt examined at first hand the brains of people who had dementia in life and observed the damage caused to brain cells. He saw the effects of Alzheimer's disease on the brain including the dramatically reduced hippocampus -  a key structure that underpins our memory functions.

He then visited the Dementia Research Centre, where he observed a routine assessment of memory, language, perceptual and other cognitive skills which relate directly to the progressive changes in the brain. Mr Hunt then saw how MRI brain scans can detect early change and track the progression of disease.

With an ageing population, dementia is soon to become the biggest burden on healthcare systems around the world. In 2010, the global cost of dementia was around £400 billion and this figure will continues to rise as more people are diagnosed each year. Alzheimer's Disease International estimates that about 135 million people will be living with dementia by 2050.

The Prime Minister is urging industrialised nations to come together to address the problem head on. Today (11 December), London is hosting an international G8 summit meeting on dementia. Health and science ministers, world-leading experts and senior industry figures will come together to identify and agree on a new international approach for future dementia research.

The event hopes to secure a more coordinated and collaborative approach to the development of new dementia treatments and therapies.

Professor Nick Fox (UCL Institute of Neurology) whose research involves improving diagnosis and tracking the very earliest stages of the diseases said: "We desperately need to find better treatment for these devastating diseases - and at the same time we must improve the care and support for the growing numbers of families that will be affected."

Up to 400 new dementia patients are referred to the NHNN each year, many are in their 50s and 60s and some even younger.

Professor Martin Rossor is director of the National Institute for Health Research (NIHR) dementia and neurodegenerative research network (DeNDRoN) which is hosted at UCL.

"We were pleased to welcome the health secretary to tell him more about our work."

The NHNN and UCL have benefited from considerable funding grants in the past 12 months which will accelerate the development of treatments and identify future therapeutic targets for neurodegenerative diseases, with the aim of earlier intervention for patients.

Image: Professor Nick Fox (left) and Dr Selina Wray with health secretary Jeremy Hunt at the UCL Institute of Neurology. Dr Wray is researching the molecular basis of Alzheimer's Disease and other forms of dementia using stem cells as a model.